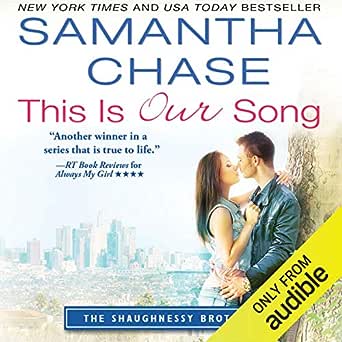 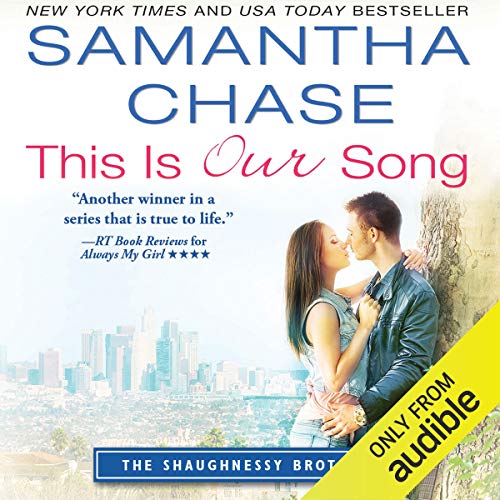 This Is Our Song

4.8 out of 5 stars
4.8 out of 5
100 global ratings
How are ratings calculated?
To calculate the overall star rating and percentage breakdown by star, we don’t use a simple average. Instead, our system considers things like how recent a review is and if the reviewer bought the item on Amazon. It also analyses reviews to verify trustworthiness.

bluebird
TOP 100 REVIEWER
3.0 out of 5 stars A wholesome rock star story 🎸
Reviewed in Australia on 12 February 2017
Verified Purchase
Well this is definitely not your usual rock star story, so if you're looking for the drugs, sex & rock n roll look elsewhere. It's quite a wholesome family story which I found in parts dragged out & seemed to be going nowhere. Well at least to solve Rileys writing issues.
All the characters were likeable, as is the story but it was just flat for me. It didn't really hook you in or glued to it.

Denise B
TOP 50 REVIEWER
5.0 out of 5 stars 6 Star Read
Reviewed in Australia on 9 February 2017
Verified Purchase
By far the best of the four, just couldn't put it down. Love the way all the family members are entwined throughout each book, but have to say the last was the best. Just loved the storyline (closet groupie I guess). Well done Samantha Chase, fantastic series.
Read more
Helpful
Comment Report abuse

Veronica
TOP 500 REVIEWER
4.0 out of 5 stars Great traditional romance
Reviewed in Australia on 7 December 2016
I received a free copy of this book to read and review for Wicked Reads.

I'm not huge on books staring singers and rock stars so I would have passed on this story if it wasn't part of a series I already love. Passing would have had me missing out on a wonderful story.

Savannah is a reporter and she is pulled off a prime assignment to interview Riley, who is taking a break from his band to make a solo album. Savannah is no fan of Riley's but once they meet the really click. Riley comes up with the idea of taking Savannah to meet and interview his family, hoping they can run interference and help him keep him from acting on his feelings.

I loved hanging out with this couple, they were fun. The night they spend at Riley's house in his games room is my idea of a perfect date. It was also great to spend more time with the Shaughnessy clan. The changes to Ian, the patriarch, has the family a little uncomfortable and it is quite amusing. I was particularly thrilled with the time we got to spend with Owen and I can't wait until he gets is own book.

If you are after a traditional romance that is funny, sexy but with no descriptive scenes, and will melt your heart, I'd recommend This is Our Song.

Seriously, if you can write a story that makes me laugh, makes me cry and well leave me wanting more, then hello 5 stars. This Is My Song is worth every one of those stars.

Riley Shaughnessy is in a huge flunk, unable to move forward in his solo career after splitting from his rock group, his manager and friend has suggested an interview for a magazine. Not looking forward to it but having not many other choices, Riley decides to meet with Savannah. He never expected that her presence would do more for him than anybody ever has, this includes his family.

Savannah Daly has just been told she is off to interview Riley Shaughnessy, rockstar God, but to her he’s another singer with to much attitude and not much else. With the interview setup and 1 month to get it done, Savannah gets to work on this man. As it was for Riley, she could never see the impact he would have on her life. While getting a in depth look into Riley, his music career and the delightful Shaughnessy family who have so much love for each other, Savannah will become privy to some of Riley‘s deepest darkest secrets, the music that haunts him and the future he wishes for.

Together the pair who were against each other in the beginning will become the glue that will recreate Riley‘s lost music while creating new memories. But with the perfection of working together, living together and loving together, pasts will come back and destroy the couple. Giving into their attraction and the chemistry that was off the charts should have been easy, and it was until the real world comes back to ruin them.

2 pigheaded people, and huge family and a twin who will do anything to see there brother happy. Riley will finally be the one being directed instead of the instigator, as Ian, Hugh, Anna, Zoe, Owen, Quinn and Darcy push Riley to return to Savannah. The past cannot destroy their future, but will it all be to late when he once again hits the big league without his Savannah. She is the reason he got his groove back and she should be there to help him reap the rewards
Read more
Helpful
Comment Report abuse

All4mykids
5.0 out of 5 stars Must read!
Reviewed in Australia on 7 December 2016
What and outstanding read. Samantha has a way of writing such wholesome stories and I would recommend any of her books. She never disappoints.

Onto the review. This was a fast read for me and I really enjoyed their story. I loved how much all of the Shaughnessy's were even involved in this story. At different times this book gave me chills and I even got teary eyed a few times. If there was a cd actually released, I would buy it in a heartbeat.
Read more
Helpful
Comment Report abuse
See all reviews

lianne7382
5.0 out of 5 stars This is our song (the shauggnessy brothers book 4)
Reviewed in the United Kingdom on 11 December 2016
Verified Purchase
I am loving the shauggnessy brother series. All so passionate and caring with a rough edge. Loved this story line. He didn't want to do the interview and neither did she but they both seem to fit together.... in more ways then 1. Roll on book 5!
Read more
Report abuse

Linda purcell
5.0 out of 5 stars This is our song
Reviewed in the United Kingdom on 10 January 2017
Verified Purchase
Another great book by Samantha chase loved the characters and the story brilliant ending can't wait to start the next one love all her books
Read more
Report abuse

PamD
5.0 out of 5 stars Another wonderful story by Samantha Chase!!
Reviewed in the United States on 7 December 2016
Verified Purchase
Samantha Chase has done it again! Riley Shaughnessy is a singer/songwriter who's band made it big. They are taking a break & everyone is trying to break out as individuals. As his other band mates find success, Riley's insecurities come out & take over. After he's passed over for a documentary, he's begins to get afraid that he can't make it on his own. Now, he can't write, the label is on him, his manager is on him & he has to submit to an in depth interview to get them off his back.

Savannah has worked hard to get where she is. A chance encounter enabled her to move from a hair stylist to a journalist interviewing the rich & famous. Now her boss has taken away the plum interview she's been researching & is making her interview Riley Shaughnessy. She feels like he's another singer with nothing but attitude.

This is Our Song had become my favorite book by Samantha Chase. She has taken a profession that we all look up to & idolize & given us a glimpse into what their lives off stage can be. Riley is written to show us a strong, possessive man at the forefront with uncertainties & vulnerabilities at his center. We learn about the courage it takes to put themselves out there day in/day out. Savannah's character is written as a journalist who has a knack of getting to the personality behind the rock star image. She goes in with a chip on her shoulder but begins to get glimpses of the real man & relaxes her guard & shows some vulnerabilities of her own. The chemistry between them leaps off the page & pulls your emotions into the story. Just when everything seems smooth sailing, something from the past comes up & devastates Riley. Can they get past it? Any story that takes complete control of my emotions - makes me laugh, cry, & keep reading until all hours of the night - deserves more than 5 stars.
Read more
6 people found this helpful
Report abuse

Kindle Customer
5.0 out of 5 stars Recommended!
Reviewed in the United States on 13 January 2017
Verified Purchase
Book 4 in the Shaughnessy Brothers series. The entire family had struggled for years from lingering effects of the mother's death. Riley, the hero, had been especially close to his mom. After her funeral, he had never again sang their special song (Over the Rainbow). Riley's the front man for a very popular band. The band members are taking a break and each one has been pursuing a solo endeavor. He has been trying for almost a year to write songs for a solo album but has only completed a few because he encountered a block. His downward spiral was sparked by being rejected for a music documentary. His agent bluntly lets him know that if something doesn't break soon, his record label is going to dump him. They are insisting that he do an interview with an entertainment magazine to generate positive publicity and squelch negative rumors. Savannah, a former hair stylist with a journalism degree, is now working for the magazine that's going to do Riley's interview. Her boss pulls her off a promised, more appealing assignment and lets her know she will do the interview or she can look for another job. She is resentful, but feels she has no choice. She's never met Riley, but has formed a negative opinion of him due to past encounters with rock stars and wrongful assumptions and preconceptions. She is upfront with him about her feelings when they meet but powerful chemistry does exist. Riley suggests she go home with him to meet his family so she can get a true picture of the real him, and she agrees. This is a sweet, romantic story with an emotional punch. I enjoyed it and am looking forward to both Owen's story (Riley's twin), and the first book in a new series about other band members (an excerpt is included in this book).
Read more
2 people found this helpful
Report abuse
See all reviews
Get FREE delivery with Amazon Prime
Prime members enjoy FREE Delivery and exclusive access to movies, TV shows, music, Kindle e-books, Twitch Prime, and more.
> Get Started
Back to top
Get to Know Us
Make Money with Us
Let Us Help You
And don't forget:
© 1996-2020, Amazon.com, Inc. or its affiliates