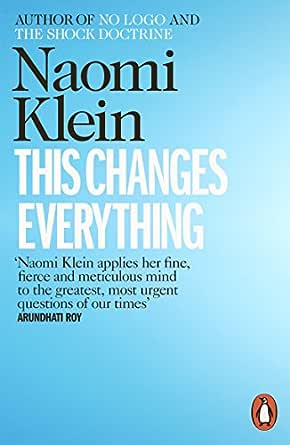 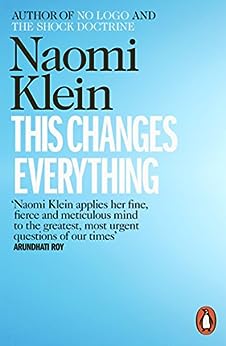 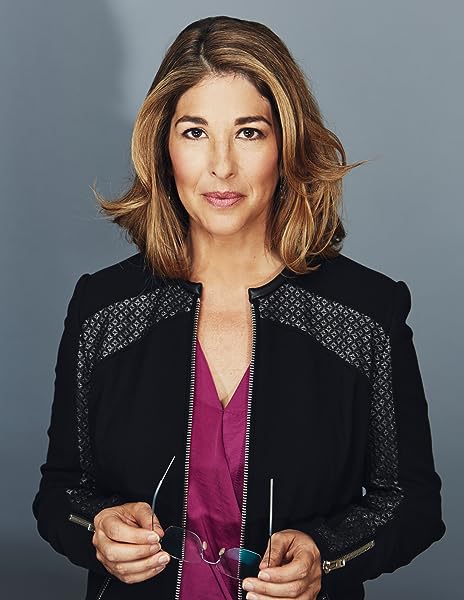 This Changes Everything: Capitalism vs. the Climate Kindle Edition

I have devoured Naomi Klein's This Changes Everything, the book the world has been waiting for. I urge everyone to read it (especially politicians). It is her most prescient book yet and is a much-needed call to arms as time runs out on climate change (Cornelia Parker Observer, Books of the Year)

It's no exaggeration to say This Changes Everything is the most important book I've read all year - perhaps in a decade. Klein sets out the scientific case for urgent action on climate change and argues passionately that our only hope of combating its effects is a revolution in our entire economic system. Crucially, she manages to leave the reader with a degree of optimism (Stephanie Merritt Observer, Books of the Year)

[T]he problems - climate change, plus everything that is changing as a result, plus the increasing toxicity of the planet - can no longer be denied. This is a conversation that needs to happen on a large scale, and on a local scale, and on a personal scale, very soon (Margaret Atwood Guardian, Books of the Year)

A desperately needed wake-up call for people like me, exposing why the threat is real and pressing - but also demonstrating why it offers an incredible opportunity to rebuild our world and create a new generation of sustainable jobs. The book is a warning. It has to be heeded (Owen Jones New Statesman, Books of the Year)

Captured the collective sense of anger and awakening ... [a] frightening look at climate change and capitalism (Matt Haig Observer, Books of the Year)

Klein brings in the weight of her knowledge and passion to show us the full force of the environmental destruction that we live in now - and, incredibly, gives us some hope regarding what could be done for the future (Flavorwire, Best Nonfiction Books of 2014)

A book of such ambition and consequence it is almost unreviewable ... The most momentous and contentious environmental book since Silent Spring (New York Times Book Review)

Naomi Klein applies her fine, fierce, and meticulous mind to the greatest, most urgent questions of our times. . . . I count her among the most inspirational political thinkers in the world today (Arundhati Roy, author of The God of Small Things and Capitalism: A Ghost Story)

Amazon Customer
4.0 out of 5 stars Compulsory
4 February 2016
Format: Kindle EditionVerified Purchase
Essential reading for all people wishing to continue residing on this blue-green rock for next 10-30 years. Well supported points for removing current economic paradigms with alternate models proposed, which offer the opportunity for a more equitable society as well as a place in which to live in one. Incidentally, rejects materialist centralised distribution systems too. Localised production, agroecology and renewable energy. Definitely polemical and probably not a viewpoint favoured by capital at this, or any future point in time.
Read more
Helpful
Comment Report abuse

Amazon Customer
5.0 out of 5 stars Please consider reading this book. Whether you agree or disagree it will be a page turner.
3 September 2015
Format: Kindle EditionVerified Purchase
I'm old and I don't have any kids, but somehow I still care about what happens to people in the next few years and even about what happens after I'm gone. There's a lot of unnecessary suffering that will likely be coming along sooner rather than later due to our unsustainable habits. There is still the possibility of having a reasonably comfortable future if we take stock of what's explained so clearly in this book. However it seems that there's not much time remaining to change our course. I hope you'll read this book. It could make a difference. We might not have to look back and think about what might have been possible. But it seems that we're down to the point where every month that goes by of sitting on the fence and diddling is going to multiply the suffering many fold. I don't think it has to work out that way. Many thanks to Naomi Klein for making the effort to inform us.
Read more
Helpful
Comment Report abuse

Jim Booth
5.0 out of 5 stars Everyone should read this book
30 May 2015
Format: Kindle EditionVerified Purchase
Excellent in every way. Well researched and well written. Should be compulsory reading for every federal politician in the western world. Climate change will continue to reek havoc on the earth as long as our senior politicians remain mere puppets of Big Oil and Gas, Big Coal and Big Miners. It's time we all stood up for what is right, with regards to extracting and burning fossil fuels.
Read more
One person found this helpful
Helpful
Comment Report abuse

vegelove99
5.0 out of 5 stars Read this
26 November 2015
Format: Kindle EditionVerified Purchase
what is there to say about this writer apart from she is fantastic
If you read one book make it this one, if you give a s*** about the planet
Read more
One person found this helpful
Helpful
Comment Report abuse

Matthew & Nicole
5.0 out of 5 stars This book does change everything
1 February 2015
Format: Kindle EditionVerified Purchase
This book does change everything. It will depress you to the point of doing something about it - and there's not much time left in the climate change game to do something meaningful about it!
Read more
One person found this helpful
Helpful
Comment Report abuse

Go to Amazon.com to see all 910 reviews 4.5 out of 5 stars
Get FREE delivery with Amazon Prime
Prime members enjoy FREE Delivery and exclusive access to movies, TV shows, music, Kindle e-books, Twitch Prime, and more.
> Get Started
Back to top
Get to Know Us
Make Money with Us
Let Us Help You
And don't forget:
© 1996-2020, Amazon.com, Inc. or its affiliates