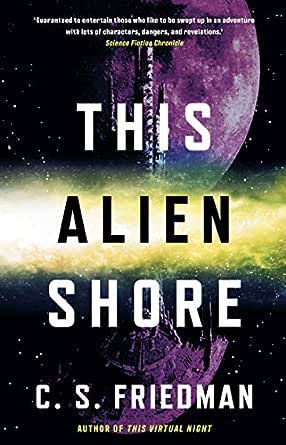 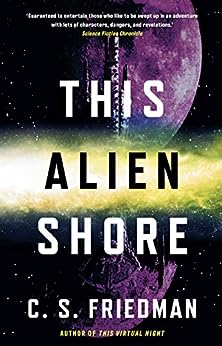 Jamisia, a young girl protected by biological brain-ware and troubled by multiple voices in her head, flees her comfortable life on a satellite when corporate raiders destroy the entire colony. To her horror, she learns that they were looking for her.

Launched into the intrigues of the mysterious Gueran guild, mutant star-pilots who have a stranglehold on galactic commerce, Jamisia is desperate to avoid capture, and must force uncertain alliances with exotic strangers. Yet, as a rogue computer virus wreaks havoc across the galaxies it seems that humanity's future rests in her hands: but first she must unlock the deadly secret hidden inside her head.

Against the rich and compelling backdrop of this epic story the author has succeeded in creating a truly unique character in Jamisia. 'This Alien Shore' is a novel of fantastic diversity, and breathtaking possibility.

"A cross between cyberpunk and Star Wars, it is likely to hold readers' interest tenaciously"
PUBLISHERS WEEKLY

“A cross between cyberpunk and Star Wars, it is likely to hold readers’
interest tenaciously”
Publishers Weekly

“One of my favourite writers”
Amanda Foreman (author of GEORGIANA) – a surprise fan!

An acknowledged master of Dark Fantasy, Celia Friedman is a John W. Campbell award finalist, and the author of the highly acclaimed Coldfire Trilogy, New York Times Notable Book of the Year This Alien Shore, In Conquest Born, The Madness Season, The Wilding and The Magister Trilogy. Ms. Friedman worked for twenty years as a professional costume designer, but retired from that career in 1996 to focus on her writing. She lives in Virginia, and can be contacted via her website, www.csfriedman.com.
--This text refers to an alternate kindle_edition edition.
Read more

4.5 out of 5 stars
4.5 out of 5
110 global ratings
How are ratings calculated?
To calculate the overall star rating and percentage breakdown by star, we don’t use a simple average. Instead, our system considers things like how recent a review is and if the reviewer bought the item on Amazon. It also analyses reviews to verify trustworthiness.

Gibbs
2.0 out of 5 stars Interstellar speciation
Reviewed in the United Kingdom on 18 November 2015
Verified Purchase
Basic absurdity (use of a particular interstellar transport results in coordinated mutations which breed true to produce manifold new species or subspecies) with all-too-familiar thriller pursuit of secretly talented fugitive and covert cyberattack. Sadly, I just lost interest two thirds of the way through the struggle. Some good bits emphasising the advantages of the non-neurotypical.
Read more
Report abuse

I just get so bored...
4.0 out of 5 stars good
Reviewed in the United Kingdom on 28 November 2015
Verified Purchase
Enjoyed it. A few incongruities, like the 20th century hackers in the distant future and not a little borrowing from Frank Herbert, but an enjoyable romp nonetheless. The most original idea of the novel - the multifarious physical and mental mutations of the human diaspora - wasn't explored enough in my opinion and this was far more worthy than another 'space navigator' plot.
Read more
Report abuse

M Gibson
5.0 out of 5 stars Great book
Reviewed in the United Kingdom on 25 May 2018
Verified Purchase
I love this book, the premise just appeals to my imagination. It's always my go to book if I'm stuck in a rut of not reading.
I was so pleased to receive this new looking hardback copy to replace my very worn paperback. Reasonable price and delivery time from the US was excellent.

Too bad I bought the Kindle version which suffered from many grammatical and typographical errors. I think that it is a complete rip-off to pay for a book at nearly $9.00 and get something that received all of the care and consideration that a high school drop out gives a senior project. I get it that OCR is inaccurate, but surely some member of the human race could have at least run the book through a spell checker to catch the "rn" combinations that were transformed into "m"'s and the "tp" instead of "to." Then there were the times when there was a random period in the middle of the sentence.

C.S Friedman wrote a great novel, too bad her publisher didn't care enough to make sure that the proof reading was done.

Read more
41 people found this helpful
Report abuse
See all reviews
Get FREE delivery with Amazon Prime
Prime members enjoy FREE Delivery and exclusive access to movies, TV shows, music, Kindle e-books, Twitch Prime, and more.
> Get Started
Back to top
Get to Know Us
Make Money with Us
Let Us Help You
And don't forget:
© 1996-2020, Amazon.com, Inc. or its affiliates