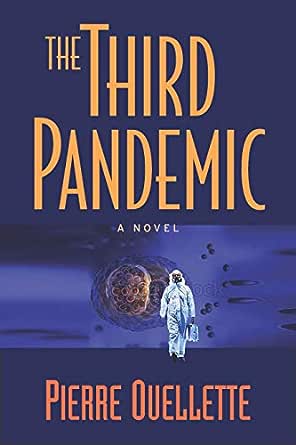 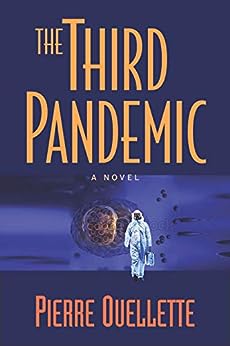 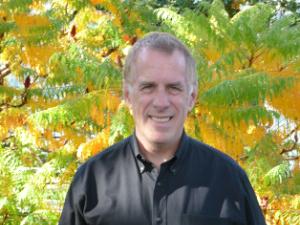 Pierre Ouellette lives in Portland, Oregon, USA, where he is partner in an advertising and public relations firm specializing in high technology. He is the author of the highly acclaimed novel The Deus Machine. --This text refers to an out of print or unavailable edition of this title.
click to open popover

Judy K. Polhemus
5.0 out of 5 stars A thrilling book difficult to put down
Reviewed in the United States on 18 March 2008
Verified Purchase
Bubonic plague of the Medieval Period was the first pandemic, the Spanish Influenza of the early 21st century was the second pandemic, a merger of Chlamydia and strep creates "The Third Pandemic by Pierre Ouellette, a book first published twelve years ago.

Because this new disease has the power to kill half the world's population, it is given the placement of major character in the novel. The writer first describes it in terms of soldiers quiet after a defeat (the antibiotic tetracycline, part of a drug cocktail that kills most infections). When it merges with strep chromosomes, Chlamydia becomes a new entity, one resistant to all antibiotics. This merger takes place when the male human carrier has sex with a woman carrying strep/chlamydia. These viruses also mate to create an unstoppable infection ready to charge as an army and wreak havoc on the world.

Details of epidemiology, computer simulation of a spreading disease, the formula for a vacination against this disease, a health official carrying a split with reality inside his head, an amoral career criminal who rides the wave of lawlessness to create a new identity as superpower leader in the void of effective leadership during the pandemic, a police detective with an abiding moral consciousness, a female doctor whose own moral dictates recognize morality in others--all parts combine to become a unified whole in presenting a what-if apocalyptic world sure to come.

In a world of flesh-eating infections, Mad Cow disease, and SARS, a new concomitant is not surprising. There is a vaccine formula, but not a vaccine. The fact that corruption abounds in mid-level positions, as well as highest levels, the attempt to keep secret the formula for a vaccine, to hold off until monetary gain is bulging with greed, will prevent the making of this life-saving drug. No matter, the disease appears and decimates the population even as these greed-hogs maneuver for their own monetary promotion. Even as this happens, the criminal element is swifter and assumes power to terrorize and manipulate.

The two righteous characters, Detective Paris and Dr. Elaine Wilkes, come together through odd circumstance and in the line of duty, to do what is available to them to fight this pandemic. It takes its toll and wears itself out, as with all diseases. The ending is interesting, but it is the story of people, the journey of courage, the path of the disease that are the essence of the novel. What can be done, who does it, who are the heroes scattered throughout the story? All these questions determine the outcome and success of an apocalyptic novel. Frankly, I wouldn't close the book at night. I kept reading and reading and....

Cube
3.0 out of 5 stars investigator protects doctor
Reviewed in the United States on 30 July 2009
Verified Purchase
I enjoyed the way the author used humanistic metaphors to describe bacterial infections and the interactions of human introduced drugs to counter these tiny attackers. e.g."A tribe named Salmonella battling a barbarian horde of tetracycline" I found this an entertaining insightful way to describe the battles between microbes and medicines. The author returns to similar metaphors sparingly throughout the book and to me they were the best part. This author has obvious knowledge of technology and demonstrates that throughout this story.
I read a lot of apocalyptic fiction and the premise of a pandemic and it's effect on humanity were the chief reasons I purchased the book. The threat of a pandemic was this novel's focus. However a full fledged outbreak did not occur until the last third of the novel. I found the depth the author described the pandemic when it occurred too brief. The book is mostly a murder mystery being investigated by a cop who will not give up his investigation. My interests usually don't lie within detective stories and that was reinforced by this story.
The book follows a detective's interactions with a doctor who had stolen a disk containing important information to save humanity, from a profit is everything, the world be dammed company. This stolen disk details a microbe that will unleash a pandemic, upon an unprepared word. This company is headed by a Machiavellian chief who aims to acquire profits at all cost, rather then use the information on the disk for the benefit of humanity. Several inconsequential characters are introduced and the circumstances that tie them together are explored in detail. This book is more Spencer For Hire then Stephen King's the Stand.
I believe readers who are most interested in apocalyptic fiction could start on the last third of the book and would miss little of importance besides the fascinating metaphors I mentioned earlier.
Read more
Helpful
Sending feedback...
Thank you for your feedback.
Sorry, we failed to record your vote. Please try again
Report abuse

Fred Camfield
3.0 out of 5 stars Pre-SARS Prediction
Reviewed in the United States on 23 April 2004
Verified Purchase
This novel was written several years before the SARS panic in 2003 and illustrates what could happen if a new virulent bacteria manages to get loose in the world population. I think that the recent response to SARS illustrated how the world in general would react.
The main problems I had with the novel were (1) a few too many subplots running in parallel and (2) a lot of digression into excruciating details of bacteriology, computer engineering, telephone message scrambling, etc. (far more than what is needed for the main plot). The author seems to be trying to show off his technical knowledge to the point where the average reader might be left a little glassy-eyed. It reminds me of old expression about asking someone the time, and having the person tell you how to build a clock.
Most of the white hats survive, and the main black hats are eliminated. The novel treats the bacteria as characters in the story, and some bacteria always survive.
Read more
4 people found this helpful
Helpful
Sending feedback...
Thank you for your feedback.
Sorry, we failed to record your vote. Please try again
Report abuse

Paula Coody
4.0 out of 5 stars Take the Time to Read This
Reviewed in the United States on 13 November 2014
Verified Purchase
A very timely book given the current Ebola scare. A real believable scenario of how a true pandemic would play out in the world today.

Well written. Mr. Ouellette's novels take a long time to introduce the characters and background. They are slow starting, but keep going ....well worth the time spent.
Read more
Helpful
Sending feedback...
Thank you for your feedback.
Sorry, we failed to record your vote. Please try again
Report abuse

EllEmm
5.0 out of 5 stars Good book.
Reviewed in the United States on 28 August 2013
Verified Purchase
(Service fine from seller)

If you like diseases and their potential spread, this is a good read. What's a bit creepy is that this book is from the mid-90's and doesn't seem dated. We face the same problems, just not the specific one in the novel -- yet.
Read more
Helpful
Sending feedback...
Thank you for your feedback.
Sorry, we failed to record your vote. Please try again
Report abuse
Load more international reviews

L. Henry
1.0 out of 5 stars Not what I ordered
Reviewed in the United States on 15 December 2009
Verified Purchase
I ordered different book but it was not worth returning this one. It is not something I would read so it is going to Goodwill - someone else might like it.
Read more
Helpful
Sending feedback...
Thank you for your feedback.
Sorry, we failed to record your vote. Please try again
Report abuse