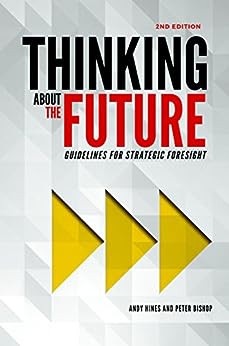 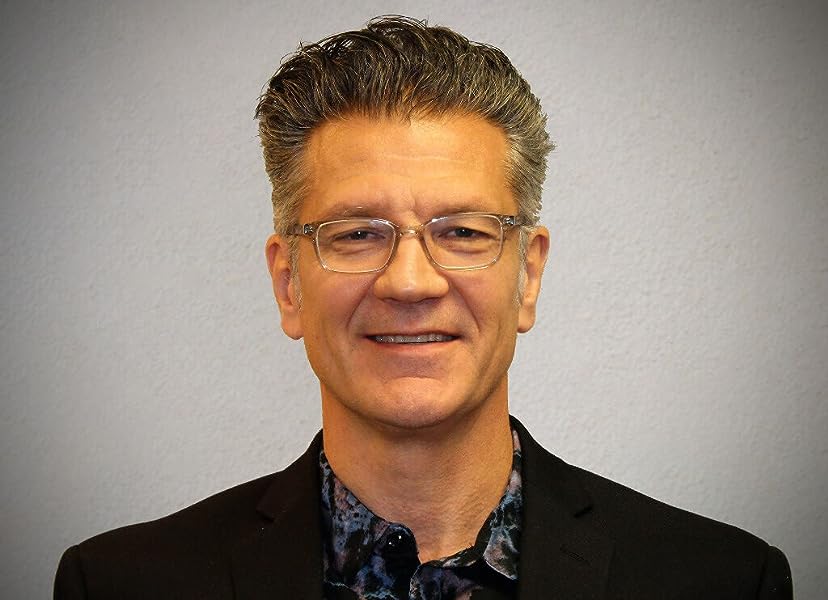 Thinking about the Future: Guidelines for Strategic Foresight Kindle Edition

by Andy Hines (Author), Peter Bishop (Author) Format: Kindle Edition
See all formats and editions
Sorry, there was a problem loading this page. Try again.
Thinking about the Future, by Andy Hines and Peter Bishop, distills the expertise of three dozen senior foresight professionals into a set of essential guidelines for carrying out successful strategic foresight. Presented in a highly scannable yet personable style, each guideline includes an explanation and rationale, key steps, a case example, and resources for further study. The 115 guidelines are organized into six sequential categories that mirror the phases of a strategic foresight activity: Framing, Scanning, Forecasting, Visioning, Planning, and Acting.

This second edition provided an opportunity to update the examples for the guidelines where they seemed dated. Otherwise, the original guidelines are intact, in the same place and order. The more significant change is the addition of a new section that provides specific “how-to” process advice to supplement the guidelines. We have been working on our approach to doing and teaching how to do foresight projects for the University of Houston Foresight Program since the book was published in 2007. The resulting “framework foresight” process is described in Section 7.0 Applying the Framework.

Executives will find both the guidelines and the framework invaluable for understanding what it takes to successfully explore the future, while analysts who actively carry out strategic foresight projects will find the book an indispensable reference that they turn to again and again.
Read more
Previous page
Next page

Dr. Andy Hines is Assistant Professor & Program Coordinator at the University of Houston's Foresight Program, bringing together the experience he earned as an organizational, consulting, and academic futurist. He is also speaking, workshopping, and consulting through his firm Hinesight (www.andyhinesight.com).

Before that, he was Managing Director of Social Technologies, and served as an Adjunct Professor with the university for five years. Hines enjoyed earlier careers as a consulting and organizational futurist. He was a partner with Coates & Jarratt, Inc., a think tank and consulting firm that specialized in the study of the future. He was also Futurist & Senior Ideation Leader at Dow Chemical with a mission of using futures tools and knowledge to turn ideas into new business opportunities. Before that, Hines established and ran the Global Trends Program for the Kellogg Company.

Hines is motivated by a professional hunger to make foresight practical and useful, and he believes that foresight can help deliver the insight that is so needed in today's organizations and the world. His goal, he says, is to infect as many change agents as possible with this message. Thus, he has honed a skill set designed to make foresight more actionable in organizations.

He has authored/co-authored four books. His most recent, Teaching about the Future (Palgrave Macmillan, 2012), won the APF's Most Significant Futures Works Award in 2014.

He has also authored dozens of articles, speeches, and workshops, including the 2003 Emerald Literati Awards' Outstanding Paper accolade for best article published in Foresight for "An Audit for Organizational Futurists" and the 2008 award for "Scenarios: The State of the Art." He has appeared on several radio and television programs, including KRIV-26 News talking about the future of libraries and the CBS "Early Show," to talk about a study MTV commissioned his team at Social Technologies to investigate: "The Future of the Youth Happiness."

4.2 out of 5 stars
4.2 out of 5
44 global ratings
How are ratings calculated?
To calculate the overall star rating and percentage breakdown by star, we don’t use a simple average. Instead, our system considers things like how recent a review is and if the reviewer bought the item on Amazon. It also analyses reviews to verify trustworthiness.

seymour hersh
4.0 out of 5 stars Great foresight framework
Reviewed in Canada on 27 October 2016
Verified Purchase
Excellent text on foresight planning and execution with practical suggestions around process, engagement and long term sustainability. Hints on the typical organizational challenges to be overcome were welcome. This text is for the experienced analyst, planner, project manager and consultant.
The supporting sources noted in the text are well worth the read.

David S
5.0 out of 5 stars ALTERNATIVE FUTURISTS
Reviewed in the United States on 10 July 2017
Verified Purchase
Many professions practice some level of gazing into an unknowable future, assessing risks and rewards, and choosing a course of action: insurance underwriters, business investors and sports bookies appear to be relatively accomplished at hedging uncertainty, given the consequences of being wrong; unaccountable meteorologists, political pollsters and Malthusians who prophesize Armageddon triggered by overpopulation, resource depletion and climate change have been less successful.
The professional discipline that defines the formal art and science of contemplating the future has various monikers, including: Futures Studies, Futurology, Futuristics, Futurism, Futuring, Visionary Management, Strategic Foresight, etc. (Z. Sardar, Futures 42 (2010) pg. 177-184).
Similarly, the Futures discipline appears to have several competing schools of thought on methodological approaches, as detailed in two recently published books on studying the Future:
• Thinking About the Future: Guidelines for Strategic Foresight (2015, 2nd Edition) by Professors Andy Hines and Peter Bishop emphasizes the Positivist/Empirical Futurists’ approach who apply an array of quantitative methods, many that originated with the American dominated military-industrial complex (RAND Corporation, Royal Dutch/Shell, Global Business Network).
• The Future: A Very Short Introduction (VSI) by Dr. Jennifer Gidley (2017) offers insight into the approach of Critical Futurists who are “unashamedly normative” and who promote the European-oriented, post-positivist, critical social theory concepts of “deconstruction, emancipation, cultural artifacts, hermeneutics, empowerment, complex bricolage, global justice”. (Gidley pg. 65)
In Thinking About the Future, Professors Hines/Bishop maintain that the future is indeed unknowable, and that thoughtful analysts can arrive at divergent conclusions and prescribe conflicting responses; at best, the practice of strategic foresight offers a structure for identifying drivers, recognizing trends, formalizing assumptions and examining the potential impacts of alternative responses. “The ultimate purpose of strategic foresight is to make better, more informed decisions in the present.” (Hines/Bishop pg. 221)
Professors Hines/Bishop compiled descriptions of 115 principles and guidelines (contributed by thirty-six recognized futurists -- many of whom are members of the Association of Professional Futurists - APF), and organized these practices into a logical progression of six cohesive functions: Framing, Scanning, Forecasting, Visioning, Planning and Acting. The result is a comprehensive, state-of-the-art, strategic foresight reference handbook. It is not a cookie-cutter recipe or checklist for conducting an applied futures study, but rather an accessible “distillation of best-practices” in a framework for scouting, assessing and prioritizing possible, plausible and probable opportunities and challenges beyond today’s horizon.
As President of the academically-oriented and UN-affiliated World Futures Studies Federation (WFSF), Dr. Gidley represents the Critical Futurists. In her new book, The Future: VSI, Dr. Gidley’s introductory sentence claims: “The future we face today is one that threatens our very existence as a species. … The impact of climate crisis alone is pointing to frightening futures of rising seas, drowning cities, mass migration of climate refugees, drastic food shortages due to loss of arable land to drought, floods and salination, and the mass extinction of species. … And this is just the beginning.” (pg. 1). She then concludes with “… the science is clear but the politics is not.” (pg. 132). Her (predictable) solution to the alleged crisis is the imposition of UN protocols to achieve global climate justice (pg. 134).
Apparently, since the future has been scientifically established and settled, the role of the Critical Futurist has been reduced to the sponsorship and promotion of a predetermined agenda to influence and manipulate the politics of a world spiraling into an impending dystopia. Are critical futurists, then, merely clever lobbyists, disguised as experts with fancy academic credentials?
Dr. Gidley acknowledges that postmodern approaches featuring “critical/postmodern, cultural/interpretive, participatory/prospective and integral/holistic…” (Gidley pg. 65) concepts are vulnerable to criticisms of “perceived subjectivity … excessive relativism … lack [of] feasibility ... lack [of] legitimacy in scientific circles … lack of depth.” (pg.68-73). Yet, regarding the credibility of Futures Studies, she laments that “… misconceptions abound in academic, professional and policy circles … the media frequently trivializes the field.” (pg. 82-83). … a self-inflicted and well-deserved criticism, in my opinion.
Read more
6 people found this helpful
Report abuse