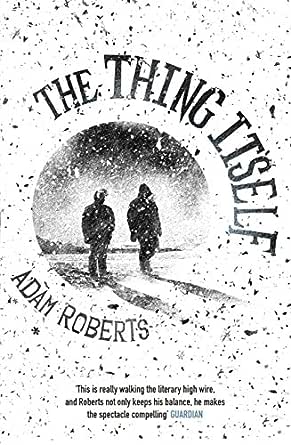 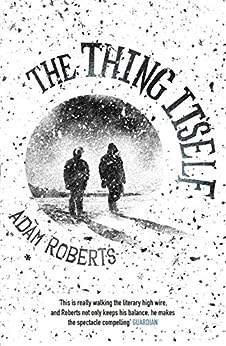 The Thing Itself Kindle Edition

A time-travelling nerd applies Kant with lethal results in this dazzling philosophical adventure...this is really walking the literary high wire, and Roberts not only keeps his balance, he makes the spectacle compelling (The Guardian)

using lit-fic techniques and by not playing by the genre rules, [Roberts] rises to the challenge that Mitchell sets down (SFX)

The Thing Itself is evidence of Adam Roberts' inimitable brilliance. (Tor.com)

I can't think of another such ostentatiously clever novel that is so dramatically successful. (Julian Baggini)

I do appreciate a novel that makes me think while also entertaining me. The Thing Itself marries the two to perfection. There is so much packed within these pages and, without doubt, it's one of those memorable novels that will stand to repeated readings over the passing of time. A book of the year for me, for sure. (For Winter's Nights)

Personally, I found it deeply fascinating...The closest reference point for me was Philip K. Dick's VALIS trilogy which fits in the same general literary area but "The Thing Itself" is definitely much more fun. (Upcoming 4 Me) --This text refers to an out of print or unavailable edition of this title.

Adam Roberts is Reader in English at London University. His first novel, Salt, was nominated for the Arthur C. Clarke Award. He has also published a number of academic works on both 19th century poetry and SF. --This text refers to an out of print or unavailable edition of this title.

It seems we are alone in the Universe. How can that be? Adam Roberts brings his own unique literary take to Science Fiction's greatest question. --This text refers to an out of print or unavailable edition of this title.

A time-travelling nerd applies Kant with lethal results in this dazzling philosophical adventure...this is really walking the literary high wire, and Roberts not only keeps his balance, he makes the spectacle compelling - The Guardianusing lit-fic techniques and by not playing by the genre rules, [Roberts] rises to the challenge that Mitchell sets down - SFXThe Thing Itself is evidence of Adam Roberts' inimitable brilliance. - Tor.comI do appreciate a novel that makes me think while also entertaining me. The Thing Itself marries the two to perfection. There is so much packed within these pages and, without doubt, it's one of those memorable novels that will stand to repeated readings over the passing of time. A book of the year for me, for sure. - For Winter's Nights --This text refers to the paperback edition.

Adam Roberts is commonly described as one of the UK's most important writers of SF. He is the author of numerous novels and literary parodies. He is Professor of 19th Century Literature at Royal Holloway, London University and has written a number of critical works on both SF and 19th Century poetry. He is a contributor to the SF ENCYCLOPEDIA. --This text refers to the paperback edition.
Read more

Richard
4.0 out of 5 stars What if AI allowed us to see reality without the filter of our consciousness?
Reviewed in Australia on 24 January 2020
Verified Purchase
Enjoyed the discussion of our perception vs the reality of “reality”. Not sure whether it finished as well as it started.
Read more
Helpful
Report abuse

Adam Browne
5.0 out of 5 stars Read it
Reviewed in Australia on 5 April 2020
Such a memorable book, epic, original, tough - he writes about ugly lives.
Read more
Helpful
Report abuse

Robert G. Cook
5.0 out of 5 stars Mind-expanding, heart-embiggening
Reviewed in Australia on 30 September 2018
If anyone ever tries to tell you that Science Fiction isn’t Literature (and yes I am capitalising deliberately), this book is the perfect riposte.
Read more
Helpful
Report abuse
See all reviews

nevillek
5.0 out of 5 stars Great book - clever, fast-paced, and well written
Reviewed in the United Kingdom on 11 July 2017
Verified Purchase
Adam Roberts writes clever books. This one is amazing - it takes a concept from philosophy and explores it in story form. The main character is not particularly likeable or admirable; his journey is one of disappointment and doesn't really resolve itself. And yet - you want to know more, you want to know if he's right, if he works it out. The Kantian philosophy is explored very cleverly, and I found myself pondering the use of AI for hours.

I read the book, and immediately wanted to go back to see what I had missed first time round.
Read more
7 people found this helpful
Report abuse

That said from what I pieced together and what I learned along the way, this book was well worth it.

The chapter "a solid gold penny" could have been a book in itself.

Essentially an exploration into perceived reality, religion and fact. Is what we see and measure just a manifestation of our own minds built to protect us from reality (the thing itself)
Read more
6 people found this helpful
Report abuse

gladfly
2.0 out of 5 stars Misunderstands Kant
Reviewed in the United Kingdom on 13 July 2020
Verified Purchase
I read the novel because I am interested in Kant, but if you understand Kant fairly well, the central idea of the novel becomes very frustrating. Let me explain: Roberts presents the Kantian Thing in Itself as a purely objective reality inaccessible to human minds but accessible via technology. The Thing is thus portrayed as the cosmological centre of all human and nonhuman reality. This is not Kant's meaning. Rather, the Thing itself, or object x, is a formally necessary designation of the object in general when speaking of experience in terms of appearances, in the way Kant does. In other words, to talk about subjective experience, we need some concept of the object in general to which a subject is oriented. Without the subject, the Thing doesn't exist; the two are a pair. The Thing is not the really real inaccessible core reality governing the rest of reality, something you could investigate or hack into using tech as if it were some mysterious planet, but a formal requirement of Kant's way of approaching subjectivity. If the novelist, who is not philosophically trained, had read Kant's work beyond the Critique of Pure Reason, or indeed anything in the vast post-Kantian corpus, he would have perhaps realised his mistake. My sense though is that he read the first part of a Kant For Dummies book and took things from there. I don't mean to sound harsh, but we expect SF authors to know science. If they're going to put philosophy at the heart of their fiction, they should also know philosophy. Can you imagine Arthur C. Clarke not really understanding gravity but going ahead and writing 2001 anyway? There were some memorable surrealistic passages here, and I liked the Antarctic stuff, but unfortunately I
found the book frustrating more than anything else. I'll give another one of his novels a go, though.
Read more
One person found this helpful
Report abuse

Poindexter
5.0 out of 5 stars Kitsch en Sync (Mitchell variation)
Reviewed in the United Kingdom on 17 July 2016
Verified Purchase
Once again Mr Roberts proves himself the master of creative fiction. A multi-strand (or not, maybe) rumination on the reality (or not, maybe) of the work of Immanel Kant (or not ...). Although the action doesn't leave the planet it does hop around it spatially and temporally with AI, shadowy agencies and a mad genius thrown in to the mix. The result may be reminiscent of the work of David Mitchell or Wim Wenders but eventually and only in the respect the reader/viewer is part of the work in hand, not an isolated bystander. The work delivers a complex and stimulating riff on the nature of reality.
Wearing my pedant's/proofreader's hat - p284 of the trade paperback: Adonais orders a new tablet device for delivery by 5pm the same day and though we stay with that character through the expected delivery time and place nothing arrives. In that single respect the work fails to deliver.
Read more
4 people found this helpful
Report abuse

But still, 5 full stars from me.
Read more
Report abuse
See all reviews
Get FREE delivery with Amazon Prime
Prime members enjoy FREE Delivery and exclusive access to movies, TV shows, music, Kindle e-books, Twitch Prime, and more.
> Get Started
Back to top
Get to Know Us
Make Money with Us
Let Us Help You
And don't forget:
© 1996-2020, Amazon.com, Inc. or its affiliates