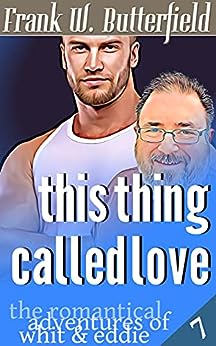 Julian
5.0 out of 5 stars A fine continuation of these 'Adventures'
Reviewed in the United Kingdom on 16 October 2020
Verified Purchase
Very much up to date - the final chapter is dated September 4 2020 - with suitable references to current events.

Back in Texas - and yet another house - this is a fast moving story, with both Whit and Eddie's stepmothers making appearances, as well as Eddie's actual mother. While the book is more concerned with the 'adventure' side of the sub-title (no spoiler details here) the 'romantical' aspect is not ignored. The action shifts around a bit - San Antonio, Medina, Lubbock - which allows Whit and Eddie time for some much-needed personal conversation. There is some comedy involving the seeming omnipresent monitoring they have to tolerate for their safety - an important aspect of the plot here.

I am a fan - needless to say. Buy this book - and the previous volumes, too!
Read more
Report abuse

Ulysses Grant Dietz
5.0 out of 5 stars Richly plotted, filled with emotional truth and slightly goofy romance.
Reviewed in the United States on 4 February 2021
Verified Purchase
Why do I love this series? Well, I really like the characters of Whit and Eddie, how different they are from each other, their deep, off-kilter love for each other. I also like that they are the heirs to Nick Williams and Carter Jones, who live on past their fictional lives into this contemporary series. Eddie and Whit represent different kinds of men, 21st-century dudes, guys who would be bros if they weren’t gay. They are complicated guys in a very contemporary way. Whit is young enough to be my kid; Eddie is old enough to be my little brother.

This seventh installment in the romantic married life of these two men, one young, one middle-aged (another nice detail), is richly plotted, incorporating the bizarre world of the pandemic, of right-wing white terrorism, and even of the power of social media in our everyday lives. This is a world where the mainstream “powers that be” (politics, law enforcement, religion) are no longer the enemy, as it was for Carter and Nick. Today, it is the extremes, the angry, struggling fringe, losing their grip on the culture wars and pissed as hell. Because of the events of 2020, we can all relate to that new, weirdly twisted kind of threat in our world. Just as J. Edgar Hoover focused on (harmless) Communists rather than on the real threat of organized crime, our blinkered conservative political leaders and their misinformed followers focus on imaginary monsters like Antifa rather than on the real, rising threat of white supremacy. Well, we all saw that on television, just as Eddie and Whit would in the weeks after this book takes place.

The underlying revelations of this slightly hair-raising plot—in which money helps, but can’t entirely shield Eddie and Whit from trouble—are based on emotional acceptance and honesty within relationships: between Whit and Eddie and their mothers, as well as between our two heroes themselves. No more dark corners. No more shame or secrets. There is a parallel to what happened in Nick and Carter’s life way back when in the Olden Days, but it is tuned to our times.

I held this book on my e-reader backlog for months, waiting for the right time to read it when I could really savor it. I’m glad I waited, but now I’m impatient for book 8. In the face of a long slow rise out of this pandemic, the Frank Butterfield Brand is my best friend.
Read more
Report abuse

Geoff Whitwell
5.0 out of 5 stars Intrigue, murder, current world events, what more could you want.
Reviewed in the United States on 13 October 2020
Verified Purchase
Like all Franks books this one also draws you in from the first chapter. It is very fast paced as it moves through events of the day and although it only covers a short time frame you feel as if a years worth of story is packed in. The reality of our current time in the story gives some peace to me that not all Americans are so Cavelier with their own or others safety. A beautiful heart felt ending after such a tumultuous few days.
Read more
2 people found this helpful
Report abuse

Kindle Customer
5.0 out of 5 stars Whit & Eddie - my favorite comfort couple 😍
Reviewed in the United States on 28 March 2021
Verified Purchase
Whit and Eddie are my chicken noodle soup and grilled cheese, my mashed potatoes, and my Chips Ahoy cookies dunked in ice cold milk. They are steady and consistent in crazy times and I am so happy they come to life at the hands of Frank Butterfield! They are madly, passionately in love with each other as they face the ups and downs of life. Granted, their lives as billionaires have some odd and out-of-every-day-world problems, but those issues help make the books fun. I love how they make friends every where they go. I love the cast of side characters. I love the mystery elements (and the excitement of the danger). I love how they interact with each other and that their love and commitment to each other is never in doubt.

5 full stars because I re-read this series for stress-free, feel good enjoyment. I know this series may not be for everyone, but I'm so glad I discovered Whit and Eddie! I recommend starting with book 1 to understand everything. The explicit sex is hinted at and most definitely enjoyed a lot by these two, but it happens off page. I enjoy explicit sex in books, but I don't feel like it's missing here. There is just something about this series...They are like my favorite comfort foods. Yummy!! 😃😍
Read more
Report abuse

Leigh
5.0 out of 5 stars This Series Gets Better With Each New Book
Reviewed in the United States on 13 October 2020
Verified Purchase
I am very much liking the way Eddie and Whit's lives are branching out, with the Matadors and Whit's future film career and Eddie talking about getting into Monumental. Also, touching base with Nick through Eddie is great. But my favorite part, as always, is watching Eddie and Whit's relationship grow. Very sweet together, but with all the challenges that a real relationship entails.
Read more
2 people found this helpful
Report abuse
See all reviews
Back to top
Get to Know Us
Make Money with Us
Let Us Help You
And don't forget:
© 1996-2021, Amazon.com, Inc. or its affiliates