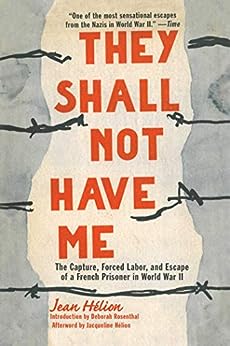 They Shall Not Have Me: The Capture, Forced Labor, and Escape of a French Prisoner in World War II Kindle Edition


"A meticulously observed description of the lives of French POWs as virtual slaves of the Third Reich, with vivid delineations of both captors and captives." --The Wall Street Journal --This text refers to an alternate kindle_edition edition.

Jean Hélion was a noted French modernist painter and author. He was a member of the Free French Forces during World War II. His work later influenced Roy Lichtenstein, Nell Blaine, and Leland Bell. He died in 1987.

Deborah M. Rosenthal, consulting editor for the Artists & Art series, is a New York painter and writer. She is a professor of art in the School of Fine and Performing Arts at Rider University.

Jacqueline Hélion, the widow of the painter, lives in Paris.
--This text refers to an alternate kindle_edition edition.

4.2 out of 5 stars
4.2 out of 5
78 global ratings
How are ratings calculated?
To calculate the overall star rating and percentage breakdown by star, we don’t use a simple average. Instead, our system considers things like how recent a review is and if the reviewer bought the item on Amazon. It also analyses reviews to verify trustworthiness.

marianrose.
4.0 out of 5 stars Incredible
Reviewed in Australia on 25 October 2018
Verified Purchase
This is an eye witness account of life in a German forced labour camp in the early 1940s and the subsequent escape of the author. Shows the ingenuity of individuals determined to escape., and the networks of help supplied by the underground movement.
Read more
Helpful
Report abuse
See all reviews

The Jannie
5.0 out of 5 stars And they didn't!
Reviewed in the United Kingdom on 31 March 2017
Verified Purchase
An excellent read which conveys well the grinding wretchedness of being a POW in Germany. The author manages to describe his failures and successes without any implied heroism. He did what he had to to get by and, ultimately, escape.
Read more
Report abuse

Amazon Customer
5.0 out of 5 stars A fascinating book!
Reviewed in Canada on 10 March 2015
Verified Purchase
There are many books about the the atrocious german concentration camps but few about other prisoner of war camps that the germans had. This book, dealing primarily with the defeat of france and the first few years of the war from a french prisoner's perspective is a fascinating and insightful look inside German psyche in this time. This eye witness account reads like the best novels and though i would have loved greater details about his escape, given the time when this book was published and concerns for his helpers' safety that the author had, i understand his decision to give a bare bones account. Even this account however is packed full of suspense and carries the reader along in the best traditions of a thriller. A fantastic book, both for history buffs and for those just looking for a good story.
Read more
4 people found this helpful
Report abuse

Ann
1.0 out of 5 stars style of writing
Reviewed in Canada on 4 February 2019
Verified Purchase
just couldn't get interested - will not read further
Read more
Report abuse

Mary Wilbur
5.0 out of 5 stars Never Give In
Reviewed in the United States on 29 July 2012
Verified Purchase
"They Shall Not Have Me" is the memoir of a French soldier's experiences as a prisoner of war in Nazi Germany. The soldier is Jean Helion who was a successful abstract artist, who had been living in the U.S. with his American wife, but answered his native country's call when it was threatened with invasion by Nazi Germany. It wasn't long before France was defeated and thousands of French soldiers were captured and sent to Germany to be used as forced labor to replace the Germans who had been drafted to fight Hitler's wars. The book is a collection of sketches or short stories describing everything that Helion's sharp senses and intelligence took in during his two years as a POW, his and his comrades strategies for survival both physically and mentally, and the various sentries, Kommandofuhrers and Unteroffiziers that controlled their lives. Helion managed to get a German dictionary which he used to improve the German he had studied in high school. His German became good enough to impress his captors so he was given the position of translator. He also worked as a clerk making sense of all the documentation the German bureaucracy required. This helped him to survive the short rations that were the prisoners' lot and which took a particularly hard toll on the prisoners who were doing hard labor. Helion's position enabled him to intervene with the authorities to obtain small privileges for his comrades, such as holding classes, putting on plays, and having an orchestra. However, from the beginning of his captivity Helion dreamed of escape from what became an increasingly insupportable and ridiculous life. He did manage to escape with the help of his POW comrades, a few civilians he managed to attach himself to during long periods of waiting for trains to take him to France (all of whom guessed he was an escaping POW), and members of the French Resistance. The book's Afterward written by Helion's widow, Jacqueline Helion, gives details about his escape which could not be made public in 1943, the first time the book was published.

According to the Introduction, by Deborah Rosenthal, Helion only made one small watercolor which concerned his POW experiences. It is a picture of prisoners shaking the lice out of their blankets. However, he returned to painting he abandoned abstraction in favor of figurative representation. I think this must have had something to do with Helion's feelings of comradeship and brotherhood with his fellow POWs. He was a man in a society of other men not alone in a studio with abstract shapes on a canvas.


Read more
21 people found this helpful
Report abuse
See all reviews
Back to top
Get to Know Us
Make Money with Us
Let Us Help You
And don't forget:
© 1996-2021, Amazon.com, Inc. or its affiliates