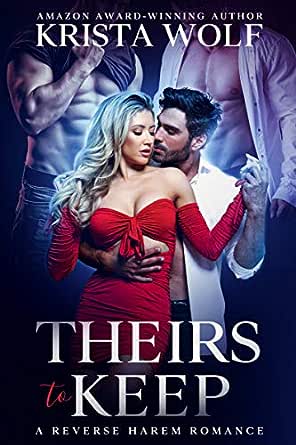 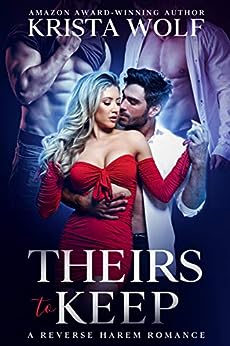 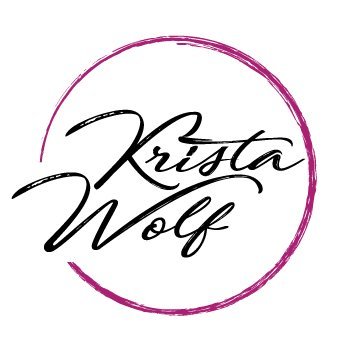 Theirs to Keep - A Reverse Harem Romance Kindle Edition

Tania
TOP 500 REVIEWER
5.0 out of 5 stars Theirs to Keep.
Reviewed in Australia on 18 July 2020
Verified Purchase
Loved the book it was great, the story was well written and the characters are interesting. The story of three best friends Roderick, Bryson and Camden share everything together, they were heart broken with their lover. Karissa went for a job and Bryson hired her for the job. When she met the other two men she liked them all. The chemistry between the three men and Karissa was pretty hot and steamy.

Joanna Stuart
4.0 out of 5 stars Sizzling as always
Reviewed in Australia on 28 June 2020
Verified Purchase
If you want smoking hot sexy times with more than one hour man, then I highly recommend this author. Shorter book than some of her other ones but no less enjoyable. Great escapism.
Read more
Helpful
Comment Report abuse

Sewsummore
TOP 500 REVIEWER
5.0 out of 5 stars It was time to embrace a future for them all together!
Reviewed in Australia on 30 June 2020
Karissa, after the death of her brother, left the painful memories behind for a new beginning. For the past twelve months, she was working as Project Manager on a historic mansion renovation. It was a job she enjoyed, and if Bryce, Camden, and Rodrick, her bosses tempted her in other ways, she resisted the temptation for as long as she could. It was midnight when Bryce collected Karissa for their tour of the mansion by torchlight, giving her a glimpse of the history of the house. All it took was a kiss from Bryce to destroy her resistance, and soon they were in his room making Love. She never expected that Camden would join them, or that she would like being taken by two men at the same time. The next morning she discovered the truth about her new lovers; they had shared a woman before. The next night Karissa woke alone in a bed wet from the open window after it had rained. She did not expect Roderick to invite her to share his bed. Soon the four of them were in a relationship that was different but perfect for them. I enjoyed this romantic menage story. The characters had all lost someone they loved in senseless death, and it was time for them to move forward with their lives. It was time for them to embrace the future together.
I received a free copy of this book via Booksprout and am voluntarily leaving an honest review.
Read more
Helpful
Comment Report abuse

Deb from Oz
TOP 50 REVIEWER
3.0 out of 5 stars Not the best
Reviewed in Australia on 27 June 2020
I have loved Krista's work for a while but I have to say her books are starting to feel a little stale He it is almost the same story just different names/jobs etc but they sound the same they react the same Think it is time to liven things up a little

Karissa ia down on her luck until her three bosses offer her a place to stay and she learns that they have one big secret They share everything including their wife that dies Now Roderick, Camden and Bryce want to share her can she accept that You will have to read to see

barbie-ann
TOP 500 REVIEWER
5.0 out of 5 stars Wow wow amazing read
Reviewed in Australia on 28 June 2020
After reading this book I had to take a little time to compose myself and get my thoughts clear in my head before I put them in a review.
Wow this book was amazingly written. Once I started I couldn’t put it down till I was finished. This book has twists and turns you don’t know what’s happening. will they all get there happily ever after or will it all go wrong. To find out what happens go buy the book. You won’t be disappointed I wasn’t.

Denise B
TOP 50 REVIEWER
3.0 out of 5 stars Okay Read
Reviewed in Australia on 1 July 2020
Karissa is hired by Roderick, Bryce and Camden to oversee the project of renovation their 150 year old mansion. Their plans are to turn it into a hotel/venue. The original idea came from their wife who was killed in a car crash two years earlier and they continued with her dream.
This story is about the relation that develops between Karissa and these three men.
The story was okay, but I guess I was a bit underwhelmed as it was a bit ho hum.
Read more
Helpful
Comment Report abuse

Tinna
TOP 1000 REVIEWER
3.0 out of 5 stars hot
Reviewed in Australia on 26 June 2020
Karissa has three hot bosses and is also supervising a renovation project. She is attracted to all three men and the feelings are mutual. But life comes with baggage and before their relationsip can grow, they have to overcome their issues to find the happy ending they all desire.

TraceyT
TOP 500 REVIEWER
4.0 out of 5 stars A great story
Reviewed in Australia on 27 June 2020
This book is a sensational story full of good things that make it a great story

The storyline is full of heat, angst, steam, humour, laughter, tears, emotions, love, and healing from the past.

If you like hot romance and some mystery in the background I highly recommend this book.

I voluntarily reviewed an advance reader copy of this book.
Read more
Helpful
Comment Report abuse
See all reviews from Australia
Get FREE delivery with Amazon Prime
Prime members enjoy FREE Delivery and exclusive access to movies, TV shows, music, Kindle e-books, Twitch Prime, and more.
> Get Started
Back to top
Get to Know Us
Make Money with Us
Let Us Help You
And don't forget:
© 1996-2020, Amazon.com, Inc. or its affiliates