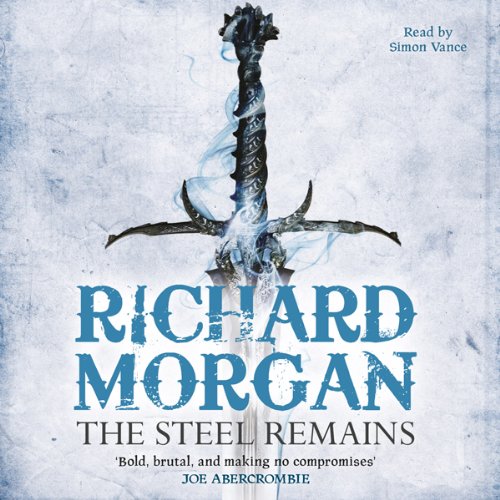 4.1 out of 5 stars
4.1 out of 5
386 global ratings
How are ratings calculated?
To calculate the overall star rating and percentage breakdown by star, we don’t use a simple average. Instead, our system considers things like how recent a review is and if the reviewer bought the item on Amazon. It also analyses reviews to verify trustworthiness.

TaijiPlayer
4.0 out of 5 stars Hard heroic fantasy - pun intended
Reviewed in Australia on 14 September 2016
Verified Purchase
Wonderful heroic fantasy centred around Ringil Eskiath, a hero broken by his past and the war he helped wage.

Like most of Richard Morgan's characters Gil is fuelled by powerful emotions and resentment at the world he inhabits. Quick to lust and quicker to violence, he carves a swath through all encounters with wit, passion and an unerring ability to tick everyone off...

I loved Morgan's use of a gay protagonist, it refreshes the genre and confronts the reader with how prejudice shapes a person and their response to a hostile cuture. Some reviewers have said Ringil worries about his homosexuality, I completely disagree. Gil is simply unapologetic and uses his hero status to highlight the hypocrisy of a society that lauds him for saving it and reviles him for his sexuality.

A nice twist for the heroic fantasy genre with plenty of standard tropes like ancient enemies/weapons, unknown sorceries, getting the band back together, and hard, Hard violence.
Read more
4 people found this helpful
Helpful
Report abuse

twohawkday
2.0 out of 5 stars At last a hero you can really get into
Reviewed in Australia on 14 May 2015
Verified Purchase
There is some really good stuff in here - the gods are very intriguing. However some of the violence is pornographically explicit. A lot of the fight descriptions are predictable (fair enough the hero can't die) and a bit boring. I'm going to get the next one though!
Read more
One person found this helpful
Helpful
Report abuse

TONY
5.0 out of 5 stars great read
Reviewed in Australia on 21 December 2014
Verified Purchase
Great read. I could not put it down.
Read more
Helpful
Report abuse

SpideyBaggins
4.0 out of 5 stars Great First Volume
Reviewed in Australia on 5 August 2016
There's some wonderful action scenes in this novel, as well as unexpected twists and turns. The characters are fully fleshed out, interesting, and I look forward to more of their adventures. Bring on Book 2! :)
Read more
One person found this helpful
Helpful
Report abuse

reader
4.0 out of 5 stars Interesting read, clever well developed characters
Reviewed in Australia on 12 June 2017
The story grabs you early, the characters are flawed , real - he makes you care about them.
Interesting SF aspects as well as plain old political intrigue
Read more
Helpful
Report abuse

JohnF
1.0 out of 5 stars Good if you're gay in the same vein as Fifty Shades of Grey!
Reviewed in Australia on 29 September 2014
Verified Purchase
I am not a homophobe but the vivid descriptions of homosexual sex and S and M just made me bail out of the book. The main character is gay and this seems to fill up 50% of the plot with him dealing with his homosexuality. Surely real gay people do not spend all their time worrying about their sexuality and more time living life. If they don't then I really don't want to read about their sexual fantasies in a fantasy novel.
Read more
3 people found this helpful
Helpful
Report abuse
See all reviews

plot hound
3.0 out of 5 stars A decent fantasy.
Reviewed in the United Kingdom on 14 July 2016
Verified Purchase
The main characters are all likeable and interesting.
Ringil is quite amusing and gets in a few good lines.

There is plenty of action and the pace is good.

There are dark and violent aspects to the plot which keep you guessing throughout.

It is slightly spoiled by two things: the first is that the romantic angle is over-played and seems a bit forced, the second is the use of the gods as a crutch, they aren't an integral part of the plot and although there are two involved the motives of one of them doesn't really make sense.

A good book but a little short of great.
Read more
One person found this helpful
Report abuse

hfffoman
3.0 out of 5 stars Feels like a joke
Reviewed in the United Kingdom on 12 May 2020
Verified Purchase
I found his science fiction writing intelligent, interesting and fun to read. This is nowhere near as good. It's not without merit and I continued to the end but it all feels like a bit of a joke. I would have said it's pitched at 12-13 year olds, except some of the content is very adult, although again even the adult content is presented like kids talking about adult stuff.
Read more
Report abuse

Maria Dellaporta
4.0 out of 5 stars Worth it
Reviewed in the United Kingdom on 1 February 2019
Verified Purchase
I have been looking for a 'Game of Thrones' equivalent for a while and this book fits the bill nicely. I am not going to say that it was a huge surprise, the gritty environment and the not-so-heroic heroes are the reasons I picked it up in the first place, but it is still a good read. I will highly recommend it unless you feel uncomfortable with homosexual erotic scenes. There are a couple of really spicy bits there that might annoy you.
Read more
2 people found this helpful
Report abuse

R H Warwick
4.0 out of 5 stars Savage living in either olden days or in the future
Reviewed in the United Kingdom on 18 July 2019
Verified Purchase
I'm only about a third of this book, and it is not your normal kind of book.
It's like a 13th setting, but it could also be some time ahead. It is quite savage
and the words are very much up to-day and earthly as well.
Read more
Report abuse

AG Strazzanti
5.0 out of 5 stars Morgan does fantasy like he does sci fi. Hard and fast. Read it.
Reviewed in the United Kingdom on 6 January 2016
Verified Purchase
Gritty fantasy, written in what I've come to realise is Richard Morgan's unique, fast paced, slap you in the face with a nasty (fictional but totally imaginable) reality. I really like this guy's books. This is (as far as I'm aware) his first forray into fantasy, and sometimes the finer details of the plot seem to twist away from understanding. If you're like me and will read books over and over again, you will pick up on anything you missed before. It's totally worth the re read. You gotta read all three to get some of the answers...which is totally worth it. For a fantasy book it hits pretty close to home in how relatable the characters are.
Read more
Report abuse
See all reviews
Back to top
Get to Know Us
Make Money with Us
Let Us Help You
And don't forget:
© 1996-2021, Amazon.com, Inc. or its affiliates