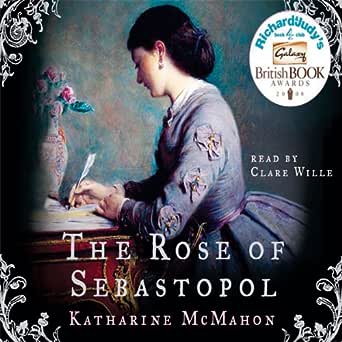 The Rose of Sebastopol

3.9 out of 5 stars
3.9 out of 5
74 global ratings
How are ratings calculated?
To calculate the overall star rating and percentage breakdown by star, we don’t use a simple average. Instead, our system considers things like how recent a review is and if the reviewer bought the item on Amazon. It also analyses reviews to verify trustworthiness.

Marguerite
5.0 out of 5 stars Excellent, why hasn't this been made into a film!
Reviewed in the United Kingdom on 18 November 2019
Verified Purchase
This is the second time I've read this and I enjoyed it even more than the first. At first, you have very little sympathy for the maleable Mariella, who seems to lack any personality or any desire other than to sew her way complacently through life. I wanted to give her a good shake. Her cousin Rosa by comparison is vibrant and instantly likeable. And yet very slowly and subtly your empathies switch. Rosa is selfish, overbearing, and Mariella is repressed, you wonder what she will do if she'll just loosen her tightly-laced corsets a little. And that's what circumstances make her do.

I loved this. The ending was not at all clear cut and those who like all ther t's crossed will find fault with it, but the imagery of the last scene was so stark and vivid I didn't think you needed any more. The atmosphere in the Crimea was horrific and vividly drawn, the pointlessness of the war, the tragedy of the needless suffering made me angry and at the same time fascinated. And the exploding of the myths around Nightingale, Cardigan and the Charge of the Light Brigade were so subtly done that you had no cause to question them.

I would highly recommend this, and I'm very surprised it hasn't been turned into a film, it would make an excellent one.
Read more
One person found this helpful
Report abuse

Trevor Cobb
3.0 out of 5 stars A little disappointing given the characters and backdrop
Reviewed in the United Kingdom on 17 May 2018
Verified Purchase
An interesting novel set against the trauma of the Crimean War. All of the leading characters change as a result of their experiences and inter-actions. A relatively slow start; I couldn’t engage initially with the practical and conventional, Mariella. But she was well cast as a well meaning yet unreliable narrator. And as soon as Rosa came onto the scene, she swept me away with her determination, enthusiasm and zeal (as she did Mariella). The appalling conditions in the Crimea are a prominent theme together with the state of medicine and entrenched attitudes of society. I enjoyed The Rose of Sebastopol but came away a little disappointed, given the characters and backdrop it could have been better.
Overall 3/5. (Plot 3/5, Characterisation 4/5, Literary Merit 3/5, Readability 3/5.)
Read more
One person found this helpful
Report abuse

Susan Stead
3.0 out of 5 stars The ending left me in the air with no closure!
Reviewed in the United Kingdom on 9 June 2018
Verified Purchase
I really enjoyed this book. The adjectives and adverbs were uniquely put. She had a different way of describing feelings and images that was really interesting. The only problem I had was the way it ended. I felt as though I needed at least one more page to read. In fact I kept looking for another page as I couldn't believe the story had ended where it did.

Will still look for other books by the same author though.
Read more
One person found this helpful
Report abuse

oldboy1
4.0 out of 5 stars Got there in the end
Reviewed in the United Kingdom on 6 June 2020
Verified Purchase
The storyline was very slow to start with, in fact, it took a couple of goes to get into it.
Eventually persevered and found once I got into it it became a good read, so don't give up.
Read more
Report abuse

Mrs. EJ WILLIAMS
4.0 out of 5 stars Before women had rights
Reviewed in the United Kingdom on 28 March 2018
Verified Purchase
I liked the story and the people inside but always find flitting from place to place and different times a bit annoying.
Good to imagine how hard it must have been to be dressed in most unsuitable clothes and to step right out of a very cloistered life into a strange country and to fend for oneself.
Read more
One person found this helpful
Report abuse
See all reviews
Back to top
Get to Know Us
Make Money with Us
Let Us Help You
And don't forget:
© 1996-2021, Amazon.com, Inc. or its affiliates