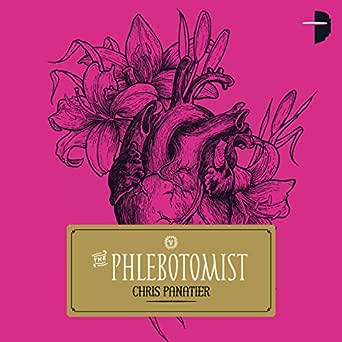 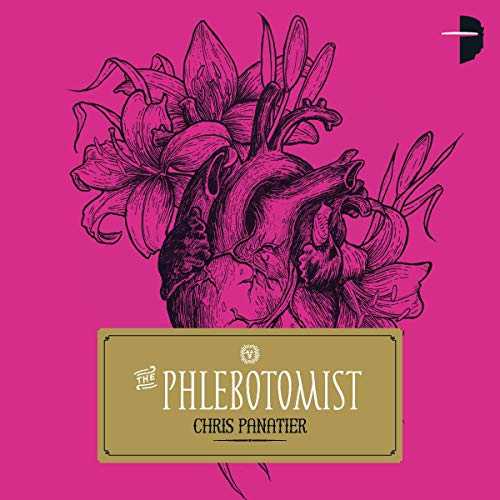 Right, where do I even start with this one? Maybe I should just leave it with a “GO AND GET THIS BOOK, NOW!” You won’t regret it at all but I guess you want more of a review than that.

Let’s get to it and i want to start with the cover of The Phlebotomist. I know we shouldn’t judge a book by its cover but how can we not when it looks this good. Just check out that cover. It’s bright pink, its simple and Chris Panatier illustrated the anatomical heart/flower mashup himself. That’s pretty damn awesome. This book is an eye catcher and will look great on any and all bookshelves.

Okay, so what I really loved about this book is our protagonist, a Reaper called Willa. A 60 year old grandmother that works for Patriot, a blood donation company, and does all she can to provide for her grandson in a dystopian near future. We get to see Willa change from the sweet and kind grandmother we all know to a mean machine during this story. Don’t get me wrong she is still sweet and kind but now knows how and is willing to get s**t done in order to keep those around her safe. Chris’ character development is fantastic and I really connected with all the characters throughout the story including the side characters.

Chris Panatier lands us straight in the centre of a country that has been ravaged by a recent war and we soon understand the consequences of the war and how the people adapted afterwards. We witness a country of titanic inequality amongst its population and this holds a mirror up to our current society and shows us how devastating inequality can be for everyone. I enjoyed the way that Chris Panatier approaches the subject of inequality and it will serve as an eye opener for many people. Overall the world building in The Phlebotomist is fantastic and if you are a fan of well crafted settings then this is for you.

Now I found the plot unique in its telling and it had me hooked and asking questions from the very first page. It’s a nice fast pace without feeling rushed and the story unravels at just the right frequency to keep the reader entertained. I certainly didn’t feel any lulls during this read and it kept my attention throughout.

Kindle Customer
5.0 out of 5 stars So much fun!
Reviewed in the United States on 26 September 2020
Verified Purchase
This book starts off fast and doesn’t let up. The protagonist is a fantastic character. I was rooting for her within the first few pages. And what an unexpected adventure! I’m blown away by the creativity and fresh approach. I barely paused while reading because I couldn't wait to see what would happen next. I am hoping the author has a sequel in the works--I’d love to spend more time in this unique world.
Read more
2 people found this helpful
Report abuse

Ashley Gonnet
3.0 out of 5 stars Great first stab
Reviewed in the United States on 2 October 2020
Verified Purchase
I've read this guy's short stories and thought they were really rad and so I was interested in his first attempt at long fiction.

I thought the premise and main idea on which the novel was built upon was fantastic. I thought the idea of using an overarching theme was interesting and I enjoyed the medical definition opening of each chapter, until I did not. I struggled to tie each specific one to a theme of the chapter and I'm open to the idea that I am not smart enough to recognize them or perhaps the writer didn't intend such a literal connection anyhow.

I think the nature of this story demanded a bit (okay, quite a lot) more detail and nuance in both the world and character-building than was there, to really bring an emotional layer to the characters and, in turn, get the emotional buy-in from the reader. I was left feeling like the characters, despite the obvious attempts and situations they were put in to become big and robust, were just sorta thin and flat (especially Everard, whose entire character breadth and depth felt the most stolen in a novel full of unearned character journeys) which necessarily made the story feel flat. That said, while this is a fatal flaw that will typically stop a book from becoming expert and a masterpiece, for the debut novel it was not completely unforgivable (or for that matter, unexpected).

What I did find unforgivable, however, was the really cheap way that the antagonists in this story were quick to advance the plot by spilling the beans, almost unprompted at times, to reveal necessary exposition and back-story for the reader. It's a cheap trick that immediately left a stench as soon as it happened in the first act and, unfortunately, it would crop up again a couple of more times throughout the journey. Ultimately I was left feeling like the antagonists were beyond a caricature, as if the villains were a parody of an Austin Powers villain which is itself a parody of the unprovoked-villain-vomiting-plans-and-crucial-details trope.

In a world of science fiction where we as readers willingly suspend disbelief to be enthralled in a story, everything can be unrealistic and we consent to everything being lies and fake. Everything except for the emotion.
Read more
Report abuse

Rick
5.0 out of 5 stars Amazing Page Turner!
Reviewed in the United States on 16 September 2020
Verified Purchase
As a fan of both old sci-fi/fantasy and new, this twist on a dystopian future had me turning pages as fast as I could! The twists and turns were surprisingly and amazingly fresh. The story was never rushed but kept a brisk pace to the end - and end that was both unforced and true to the plot. The author never got too too wordy - no long boring paragraphs, pages or soliloquies that often feel like "filler" in lesser works - here, each word, sentence, paragraph and page was purposeful and moved the story forward - never side to side or backwards - and the characters had just the right amount of depth to keep you interested but not so much that you got lost in the minutiae. I highly recommend you give this book a try. And then pester the author for a sequel - or two or three!
Read more
One person found this helpful
Report abuse

MBB Frantes
5.0 out of 5 stars PAGE TURNER. Could not put it down!
Reviewed in the United States on 4 October 2020
Verified Purchase
Creative and Intriguing story with well developed characters. Very well thought out, all the way through the last page. Admired the use of older female protagonists. Strong, determined, wise and very capable women take a turn at saving the world. Men shouldn’t always get to be the heros. Thank you to the author for recognizing that fact. We need more stories like this, with admirable, mature lead females. Would make a great movie. I imagine that is already in development! If you don’t already know your own blood type, you will want to learn it after reading this book
Read more
One person found this helpful
Report abuse
See all reviews
Get FREE delivery with Amazon Prime
Prime members enjoy FREE Delivery and exclusive access to movies, TV shows, music, Kindle e-books, Twitch Prime, and more.
> Get Started
Back to top
Get to Know Us
Make Money with Us
Let Us Help You
And don't forget:
© 1996-2020, Amazon.com, Inc. or its affiliates