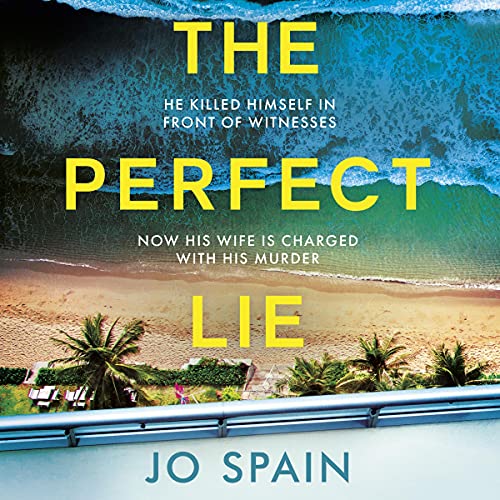 4.1 out of 5 stars
4.1 out of 5
515 global ratings
How are ratings calculated?
To calculate the overall star rating and percentage breakdown by star, we don’t use a simple average. Instead, our system considers things like how recent a review is and if the reviewer bought the item on Amazon. It also analyses reviews to verify trustworthiness.

Heidi (but books are better)
TOP 100 REVIEWER
4.0 out of 5 stars How well do you really know your spouse?
Reviewed in Australia on 31 May 2021
Jo Spain knows how to write a twisty mystery, so I was very excited to read her latest novel THE PERFECT LIE. Inspired by the challenges of facing adversity and tragedy whilst living abroad, Spain casts her main character Erin as an Irish woman who has escaped a painful past by moving to the US and marrying an American detective. They are now happily living in New York, far from Erin’s parents and the family dynamics that have split them apart. But one morning, her husband Danny commits suicide by jumping from the balcony of their fourth floor apartment, leaving behind a legacy of questions no one wants to answer. What prompted her easygoing husband to take his own life in front of her?

The story unfolds in an unusual format: after the shocking opening scenes, here we have the POV of Erin in the present as she is awaiting trial for the murder of her husband. Murder???? But didn’t she say that he jumped and took his own life?

The second POV is also Erin’s as she is recounting the time leading up to Danny’s death. And the third POV introduces two other characters who are seemingly unconnected to the main story. Where is this all going to lead?

I spent a large percentage of the book in wonderment, puzzling how all these timelines could possibly connect in the end and why Erin was in court accused of murder. It wasn’t until very close to the end that the AHA! Moment finally came as more pieces of the puzzle fell into place. Spain knows how to construct a multi-layered mystery, and I thought she did a great job in keeping me in the dark. I love it when a story takes me totally by surprise!

Whilst I was mostly gripped by Erin’s predicament, I did feel that the book could have benefitted from a bit more editing of the other timeline, which contained a lot of information that slowed the main part of the story down but wasn’t all relevant to the central mystery. Instead, I would have liked to see a bit more background about Erin and Danny’s relationship, as I wasn’t totally convinced by their great love story. But these are minor quibbles because the story gripped me pretty much right from its explosive and shocking opening chapter and kept me guessing to the very end.

How well do you know your spouse? This really forms the central question to Spain’s new mystery, and it’s something you will ask many times as the story unfolds from it’s jaw-dropping opening chapter to the final tying up of threads. If you are looking for a domestic thriller that stands apart from others in the genre by clever layering of multiple elements and by withholding just the right details to keep you guessing, then give this book a go!
Read more
Helpful
Report abuse

Mandy White (mandylovestoread)
TOP 50 REVIEWER
5.0 out of 5 stars Easily a 5 star read for me, with an ending that you will not see coming.
Reviewed in Australia on 15 May 2021
Jo Spain books are the kind that you want to settle down with a cuppa and devour in one sitting. I really wish I could have done this with The Perfect Lie, but all the same it was a fantastic and I couldn't getr enough. Her books are always so twisty and shocking and this one was no different. With a story told through the past and present and from multiple points of view that all come together in the end, this is a book that will leave you wanting more.

Erin Kennedy thought she was living the perfect life. After a family tragedy she moved to New York from Ireland and married police officer Danny. They were happy and things were great. Until the day that he throws himself over their 4th story balcony to his death. So why, 18 months later, is she in court for the murder of her husband?

Erin realises that she didn't really know Danny at all. What she learns about him after his death makes her question everything. The police are not talking and she feels like she is losing her mind. She has no other family in the US and very few friends. She doesn't believe him to capable of what he is being accused and sets out to find the truth.

Jo Spain is a go to author for me and I can't recommend her books more. Easily a 5 star read for me, with an ending that you will not see coming.
Read more
Helpful
Report abuse

Brutally Honest Reviews
TOP 50 REVIEWER
5.0 out of 5 stars Deliciously creepy
Reviewed in Australia on 16 May 2021
This book starts with an extremely confronting scene - a police officer jumps to his death from the balcony of his apartment right in front of his wife’s eyes - and it doesn’t get much less shocking from there. Trying to deal with the trauma of Danny’s death, Erin Kennedy wants answers. Why did Danny jump? And why won’t any of his police colleagues even look her in the eye?

Searching for the truth, Erin is lucky enough to find supportive friends: ferociously tough lawyer Karla, black-sheep-of-his-rich-family bar owner Bud, and others she doesn’t realise are really on her side until later. When she meets Cal Hawley, however, is when she starts to discover the truth of what Danny was really up to. Cal’s from a rich family but incredibly troubled by his stepsister Lauren’s tragic death - and he’d asked Danny to look into Lauren’s case.

This is told in several different timelines, with Lauren’s original troubles being documented through the eyes of Ally, who knew her at Harvard a couple of years before any of the events with Danny and Erin occur. Then there’s Danny’s death and the immediate aftermath of it, and the ‘now’ timeline… where Erin is on trial for murdering her husband. This does lead to some momentary confusion - did Danny really die? - but it’s eventually apparent that Erin remarried and it’s this second husband she’s accused of murdering.

I won’t spoil things any further, but the whole story is a sobering look at what happens to regular folks who get caught in the crossfire of sociopaths with enough money to bury anything they want to bury. It’s riveting, if occasionally traumatic - trigger warnings for violent assault, rape, suicide and drug addiction apply. I honestly couldn’t put it down; I was rooting for Erin from the beginning and the ending was definitely satisfying even if it did leave one pressing question unanswered (obviously deliberately, just for the creep factor). Five stars for a fantastic read.

Disclaimer: I received a review copy of this title via NetGalley.
Read more
Helpful
Report abuse
See all reviews

Col
5.0 out of 5 stars Another twisty un-put-down-able book by Jo Spain.
Reviewed in the United Kingdom on 7 June 2021
Verified Purchase
I have read all of Jo's books and this latest one doesn't dissapoint. The plot is twisty as are all of her books and as usual I had it read in a couple of nights which is problematic as you're waiting a year for the next book :)
As you read you realise there are twists that you're not aware of and only when you get to the last 3/4 of the book do you find yourself going "oooooh hang on" as you flick back and think "I've missed something". A fantastic writer whose books are an utter joy to read. Very much looking forward to her new TV series too - I think it's called "Harry Wilde" with Jane Seymour. Buy all of her books, you won't regret it. And you won't fine grammar and spelling errors here!!! JOY.
Read more
2 people found this helpful
Report abuse

Malcolm R
3.0 out of 5 stars Nicely complicated but curiously tension free
Reviewed in the United Kingdom on 18 July 2021
Verified Purchase
Almost Ireland’s answer to Harlan Coben in that the plot grips you straight away and the author is adept at various plots including a stock police (or private eye) procedural. The story is complex with three timelines -which is a bit clunky - and throws up lots of what ifs and leaves some strands unresolved - what did happen to the money, did she get an annulment? - but it is a bit slack and, for me lost it’s grip in several places so I was on the verge of boredom. There is no big reveal or feeling of “I did not see that coming” and it peters out with a feeling of mistrust rather than resolution. It is an enjoyable read but in the end I was just not very interested or involved in her (I have forgotten her name already) story.
Read more
Report abuse

Kindle Customer
5.0 out of 5 stars Different is still great!!!
Reviewed in the United Kingdom on 8 June 2021
Verified Purchase
I’m a massive Jo Spain fan and love Tom Reynolds and all the team so I was expecting to hate this one but I was shut up from page one! Absolutely brilliant plot and twists and lovable characters that keeps you page turning in suspense of wtf!!! Just a fantastic stand alone read and the acknowledgment at the back to the COVID pandemic made me love this Author all the more well done jo keep them coming !
Read more
One person found this helpful
Report abuse

Bristol Book Blogger 📚📖📓
4.0 out of 5 stars An original concept
Reviewed in the United Kingdom on 15 May 2021
Verified Purchase
I was really looking forward to this, I love all Spain's books, and this one had a great premise. It's original and compelling but I think because I'm used to an Irish landscape I didn't quite feel as invested in this one as her others. That said I did still enjoy it. I just struggled to identify with the protagonist.
Read more
Report abuse

SPhillips3
5.0 out of 5 stars Gripping!
Reviewed in the United Kingdom on 20 June 2021
Verified Purchase
I thoroughly enjoyed this book, and looked forward to reading it whenever I got the chance. I was gripped from the beginning Perfect plotting and detail that first of all had me going in one direction, only for it to change again.
This is the first Job Spain book I have read, I'm now off to read her previous books.
Read more
Report abuse
See all reviews
Back to top
Get to Know Us
Make Money with Us
Let Us Help You
And don't forget:
© 1996-2021, Amazon.com, Inc. or its affiliates