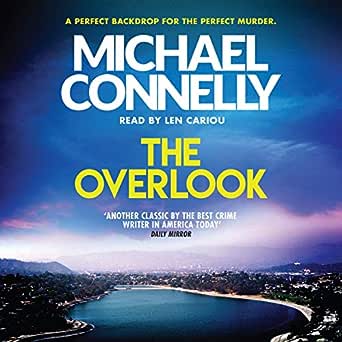 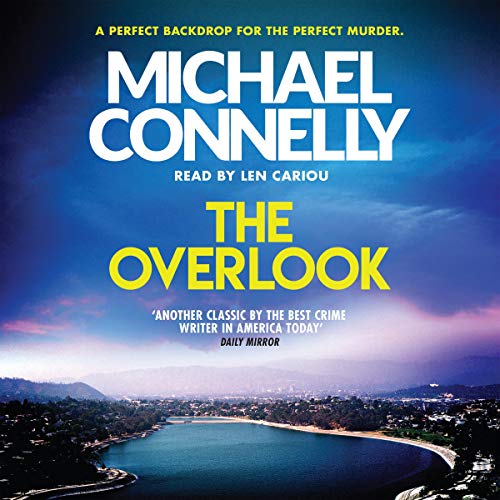 4.6 out of 5 stars
4.6 out of 5
2,125 global ratings
How are ratings calculated?
To calculate the overall star rating and percentage breakdown by star, we don’t use a simple average. Instead, our system considers things like how recent a review is and if the reviewer bought the item on Amazon. It also analyses reviews to verify trustworthiness.

Rod Eamens
5.0 out of 5 stars An apparent terrorist theft of highly radioactive and toxic Cesium 137.
Reviewed in Australia on 3 February 2015
Verified Purchase
Harry Bosch has returned to LAPD from retirement and is at home awaiting his first callout at Homicide Special. His new supervisor is Lt. Larry Gandle whilst Ignatio Ferras (call me "Iggy") is his new partner, 20 years his junior. Near midnight the phone rings HarryÃ¢(tm)s. He is directed to take over a shooting at The Overlook, a roadside lookout giving a wonderful view of the city. He calls Iggy immediately and they plan their meeting at the crime scene after he obtains a car and other material from their office. The gangland slaying-style victim is Stanley Kent, a 42 year-old radiation physicist whose home is nearby though his car has been used to access the crime site. Harry does a preliminary inspection finding several key cards which give Kent access to those hospitals in the county which use radioactive material for therapy. KentÃ¢(tm)s role is to calculate the amount of material required for the patient and delivers this to the oncologist of treatment.

Rachel Walling, Special Agent of the FBIÃ¢(tm)s Tactical Unit and former lover to Harry arrives at the scene. He still harbours fond feelings for her and once again admires her great beauty. She bustles about acting in charge on behalf of the FBI as she tenuously claims the case has a terrorist relationship due to the radioactive connection through Kent. She confirms identity of the body indicating there is no risk at the moment as her detector had not reacted nor had special rings on two of the victimÃ¢(tm)s fingers. She knows the victim lived nearby and suggested Harry and she go there to notify the wife, Alicia Kent.

On arrival they are met by Agent Jack Brenner, RachelÃ¢(tm)s partner, who takes over. Harry indignantly states this is a murder case which clearly belongs to LAPD. This sets up a difficult relationship between the parties but Harry will not cede the case until terrorism trails are identified.

Mrs Alicia Kent is found unconscious, naked, gagged and "hog-tied" on the main bed. Alicia starts to recover helped by Rachel, freed from ties and into a gown. She explains to the Agents and Harry that two men broke into the house and demanded certain things concerning her husbands work, or he would be murdered. Harry and Brenner head off to St AgathaÃ¢(tm)s hospital where the countyÃ¢(tm)s Cesium is stored ready to be taken out to other hospitals as determined by Stanley Kent. Difficulties with the hospitalÃ¢(tm)s security staff are quickly overcome by a forthright manner and show of force by Agent Brenner whose specialist radiation team arrive on the scene. All Cesium is gone with a note left by Stanley saying he was being forced by threat of death to his wife and had been shown an email photo of her on the bed as described above.

A person is admitted to hospital suffering severe radiation burns. Harry and Rachel hurry to the site the paramedics stated he was found. It eventuates he is a scavenger who had found the Cesium and other material from the original crime in dumpsters left out for pick-up. Harry had not turned on his radiation detector and receives a scare when it does go off. As the full FBI radiation team arrive led by Brenner, Harry feigns early radiation effects and Rachel takes him to the hospital though Harry diverts her on the way. They return to KentÃ¢(tm)s home where Harry and Rachel and put together the real story.

Amazon Customer
4.0 out of 5 stars Bosch is back!
Reviewed in Australia on 14 June 2018
Verified Purchase
The Overlook was such a thrill ride after the tamed down version of Bosch since he returned to the force two novels ago. No mistaking i enjoyed the last two but in this one it's like Bosch has been given a new infusion of obnoxious bull headed jerk behaviour which i found delightfully entertaining. Seemed like a much shorter read but was a lively thrill ride. Great tale with good twists as always. Stay salty Bosch!
Read more
One person found this helpful
Helpful
Report abuse

Barbara Sth Aust
TOP 500 REVIEWER
5.0 out of 5 stars Once again Michael Connelly has written a book that holds you spellbound from beginning to end.
Reviewed in Australia on 26 July 2018
Verified Purchase
You cannot read a Harry Bosch novel without being captivated by the details that go into it. Follow the clues. Piece together the details and you come to a conclusion. That is what Harry does every time. Long live Harry. Long live Michael. May the stories go on and on forever.
Read more
Helpful
Report abuse

Allen T. Barnett
5.0 out of 5 stars Wow
Reviewed in Australia on 8 January 2017
Verified Purchase
Where does Michael get his ideas?
What an imagination!
As always on tenterhooks through the whole storey.
And no sex!
Read more
One person found this helpful
Helpful
Report abuse

Steven Porritt
5.0 out of 5 stars Connelly has done it again!
Reviewed in Australia on 28 June 2018
Verified Purchase
Terrific plot design. Great twist at the end. The continuity from previous books is excellent and believable. A very good read but I suggest you start with the Black Echo.
Read more
2 people found this helpful
Helpful
Report abuse

Expecting Perfection
3.0 out of 5 stars Less absorbing than usual
Reviewed in the United Kingdom on 13 September 2017
Verified Purchase
Hmmm... I may just be tiring of the usual sub-plots in crime novels, films & TV series, where the cops always have to fight with the FBI and every other agency while trying to solve some murder or other. Plus the constant infighting with their current assigned partners / lieutenants / captains / Chiefs, etc., etc... and this story has elements of all those things once again (yawn...).
Bosch as a character is interesting and complex, or he was at first - many books ago - but the series is getting a bit formulaic now for me. Like a crossword puzzle nerd, after a while you can guess the answers to the clues more quickly and predict 'whodunnit' more easily.

For that, and other reasons to do with the basic plot, this story seemed less absorbing to me than Michael Connelly's earlier Bosch novels. One of the pitfalls of following a series of books with the same lead character (Bosch, Spenser, Jesse Stone, Jack Reacher, etc...) is that you can gradually lose interest in the same-old-same-old character flaws and personal history of the hero. I appreciate that the writer has to include some of that stuff each time for readers who haven't read a Bosch story before, so I realise that I'm the one with the problem!

Anyway... I guess the book is written well enough to help you fall asleep at bedtime, but I probably need a break from Bosch for a while and get into someone else's writing and flawed characters.

(NB - I hadn't read the other reviews before reading the book, and looking at some of them now - from as far back as 2008 - I'm glad I'm not the only one who thought this was well below par. Others have picked up on the same points as mentioned.)
Read more
5 people found this helpful
Report abuse

jacw2000
5.0 out of 5 stars A Cracker
Reviewed in the United Kingdom on 25 July 2018
Verified Purchase
There's a murder. And Harry Bosch is called to the scene. And suddenly the FBI turns up. Seems it isn't a simple murder after all.

The LAPD and the Feds don't have a totally supportive team environment. Basically they hate each other, and Harry is not one to build bridges. Turns out that he is right all along. Harry is always right all along, or almost.

If you like Harry Bosch novels, and I do, then this is a cracker, with additional snide asides on how to commit the perfect crime by blaming it on terrorists.
Read more
2 people found this helpful
Report abuse

SB
3.0 out of 5 stars Standard Bosch
Reviewed in the United Kingdom on 27 January 2020
Verified Purchase
Bosch being Bosch. Falling out with Feds. Pushing his luck with his LAPD bosses. Strained romantic and personal relationships. But Using his guile, toughness and detective genius he saves the day. A really straight forward story and plot, not predictable but maybe not as much in it as other Bosch books. Still good though.
Read more
One person found this helpful
Report abuse

Lynn P. Andrews
3.0 out of 5 stars Did Okay But Could Have Been Longer
Reviewed in the United Kingdom on 15 February 2013
Verified Purchase
I can't quite put my finger on why this was a slight disappointment for me, I usually enjoy Harry Bosch investigations. When the book arrived I realised it would not take long to read, there are just under 300 pages and I think if this was intended to be a "shorter" story then, in my mind, Michael Connelly made a mistake. Perhaps he had begun churning out the stories instead of developing them properly when he wrote this.
A man is murdered, dangerous materials stolen, wife threatened. Who did it. I'll leave it to you to find out and it won't take too long.
That could be the root of the problem here, everything got solved so easily and all of a sudden, wham, it was finished.
Of course I didn't realise the story was over because several pages remained and it seemed as if there was some way to go. As I turned over from what was the last page I found Michael Connelly had "intervewed" Harry Bosch and it was printed on the next few pages. This was a novel idea and it was good to see that Bosch was just as single minded out of script as he is on it...!
Read more
2 people found this helpful
Report abuse

Malcolm R
3.0 out of 5 stars Grips like a vice (vise?)
Reviewed in the United Kingdom on 20 April 2018
Verified Purchase
Starts at a gallop and gets faster with Harry solving the case before anyone else takes a breath the only hiatus is a comic interlude of police stupidity. Short and cinematic I read it in several hours which shows the grip it exerts but it has no depth as earlier volumes have, none of Harry’s belligerent righteousness or melancholy though he still manages to listen to a bit of jazz. Not the best puzzle though for that you should read something else.
Read more
Report abuse
See all reviews
Get FREE delivery with Amazon Prime
Prime members enjoy FREE Delivery and exclusive access to movies, TV shows, music, Kindle e-books, Twitch Prime, and more.
> Get Started
Back to top
Get to Know Us
Make Money with Us
Let Us Help You
And don't forget:
© 1996-2020, Amazon.com, Inc. or its affiliates