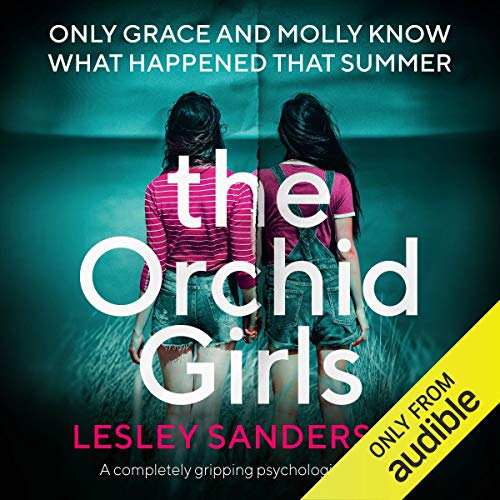 They called them the Orchid Girls. Grace. Molly. Charlotte.

On a jagged Dorset cliff, wind whipping their hair, waves crashing on the rocks below, three friends became two when Charlotte’s body was pulled out of the sea.

Fifteen years later Grace and Molly are worlds apart. Grace has a glittering career and a loving husband. Molly is a lonely, unemployed alcoholic. Grace has everything to lose. Molly has nothing.

They have moved on from the tragic accident that shadowed their childhood. But somewhere lies a photograph waiting to be unearthed - waiting to reveal a secret one of the Orchid Girls is desperate to keep hidden....

The Orchid Girls is a breathless, gripping and twisty story of love, obsession and dark, shocking secrets. For fans of K. L. Slater, The Wife Between Us and The Girl on the Train.

Switch between reading the Kindle book & listening to the Audible narration with Whispersync for Voice.
Get the Audible audiobook for the reduced price of $2.99 after you buy the Kindle book.
Learn more about membership
By completing your purchase, you agree to Audible’s Conditions Of Use and Privacy Notice.
Sold and delivered by Audible, an Amazon company

4.1 out of 5 stars
4.1 out of 5
338 global ratings
How are ratings calculated?
To calculate the overall star rating and percentage breakdown by star, we don’t use a simple average. Instead, our system considers things like how recent a review is and if the reviewer bought the item on Amazon. It also analyses reviews to verify trustworthiness.

audrey
TOP 500 REVIEWER
3.0 out of 5 stars Not a psychological thriller!!
Reviewed in Australia on 20 January 2019
Verified Purchase
The beginning is like a cooking lesson! far too much detail.
Early on the reader realises there is a lesbian relationship intertwined with the theme, so if that's not your cup of tea ... read no further.
Very slow to get to the point and it's not difficult to figure out who did what and what happens in the end
Disappointing really after the hype of the promotion
Read more
2 people found this helpful
Helpful
Report abuse

Kindle Customer
1.0 out of 5 stars The Orchid Girls
Reviewed in Australia on 12 April 2019
Verified Purchase
did not enjoy reading this book at all
Read more
Helpful
Report abuse

coffecup
3.0 out of 5 stars Ok but not suspenseful
Reviewed in Australia on 29 April 2019
Verified Purchase
Slow in spots but I still liked it
Read more
Helpful
Report abuse

Sandra Sharpe
4.0 out of 5 stars The Ending
Reviewed in Australia on 18 December 2018
Verified Purchase
I didn't pick the ending until the last chapter...just how you want a good thriller to be.
Read more
Helpful
Report abuse

Mandy White
TOP 50 REVIEWER
4.0 out of 5 stars Tough Subjects
Reviewed in Australia on 13 November 2018
The Orchid Girls by Lesley Sanderson tackles some tough subjects even in 2018. The main characters all have their flaws and are not especially likeable at times but it all makes for a great read. It was a bit slow to begin with, the story from the past being drawn out very slowly. The pace does pick up and by the end I didn't want to put it down.

Childhood friends Molly, Grace and Charlotte were known as the Orchid Girls. One summer, Charlotte dies on a Dorest cliff edge. Molly and Grace are haunted by this the rest of their lives. 15 years later Molly is an alcoholic and Grace is married to a famous politician and is about to release her first book. The 2 get back in touch and secrets are dying to be told. A photo threatens to destroy them - what will they do.
Read more
Helpful
Report abuse

Kylie D
TOP 500 REVIEWER
3.0 out of 5 stars Okay Psychological Thriller
Reviewed in Australia on 13 November 2018
I found The Orchid Girls to be an okay psychological thriller, though it dragged on a bit. Three teenage girls are hanging out for the summer in Dorset, yet one day one of the girls. Charlotte, doesn't return home. Her friends, Grace and Molly, claim they left her in town, though this is clearly untrue. Other than that they're saying nothing. Fast forward 16 years and we find Grace is a successful social media star, with her husband running for Mayor of London, whereas Molly is a lonely alcoholic. Yet the two women find their lives drawn together again, with the past threatening to catch up with them. What happened on the cliff? What really happened to Charlotte?
The going in this book was so slow, it really missed out on creating a chilling atmosphere. Where suspense should have been building, I found my interest waning. This book is about 100 pages too long. It's an passable book, and lovers of the genre will probably like it, even if it is a bit transparent at the end.
My thanks to NetGalley and the publisher for an ARC in exchange for an honest review.
Read more
Helpful
Report abuse
See all reviews

Vikki Patis
5.0 out of 5 stars Evocative, engaging, and utterly enthralling
Reviewed in the United Kingdom on 13 November 2018
Verified Purchase
The exploration of female friendships has always been fascinating to me. How deep the bonds can go, particularly those formed in childhood or adolescence. Molly and Grace are bound to one another by a secret, and an act that changed the course of their lives. Years later, Grace is a celebrity food blogger, married to an MP, and Molly is a drifter, spending her days lost in a drunken stupor. How different their lives have become, and yet they still have their past in common. A past that is coming back to haunt them.

Sanderson tackles various key issues in this book, not least the theme of homophobia, and the struggle to accept oneself. She also manages to portray alcoholism with skill and sensitivity, giving Molly depth and enabling the reader to relate to her. Grace is, in her own ways, impeccably flawed. She hides behind the Queen of Clean facade, desperately trying to hide her true self. She too is an incredible character, one that is made up of various shades of grey.

The Orchid Girls is called a gripping psychological thriller, and that it is, but it is also so much more. It's evocative, engaging, and utterly enthralling.
Read more
5 people found this helpful
Report abuse

Panda
5.0 out of 5 stars Story draws you in.
Reviewed in the United Kingdom on 18 November 2018
Verified Purchase
This tense story builds up the tension, inching closer to revealing what binds these two former friends together. Well written story and fully realised characters. Highly recommended for a great page turner.
Read more
6 people found this helpful
Report abuse

Griffy
5.0 out of 5 stars Amazing debut!
Reviewed in the United Kingdom on 27 January 2019
Verified Purchase
This book is a fantastic example of a story where a deadly secret from the past is the main character, Grace’s, biggest enemy. After all, she’s on the verge of superstardom, and also has a reputation to keep for her politician husband.

Secrets, lies and obsession are some of the central themes and I found each chapter captivating. I couldn’t wait to turn the pages, read each point of view and take in the diary entries, to find out how the characters were going to further funnel themselves into their cramped corner - but who was going to triumph? I had no idea who to trust, obsessive stalker Molly or perfect clean-eating domestic goddess Grace, Ellis, Grace’s father or even Molly’s uncle. Believe me, it all bangs together in an explosive ending.

Sashay Gazebo
5.0 out of 5 stars Clean food and dirty secrets.
Reviewed in the United Kingdom on 23 February 2019
Verified Purchase
I really enjoyed this compelling story.

Part psychological thriller, part whodunit the book explores some difficult issues such as addiction, guilt, repression, co-dependency and fear. Even so it is easy to read and the two main characters are well drawn. I cared about Molly and Grace and what happened to them in the end.
I find it hard to enjoy a film or novel when I don't really care about any of the characters usually because they are so superficially written or have no redeeming qualities.

I was kept guessing until the end as to who was the main culprit with the author's skilful use of false leads.
To paraphrase Churchill I correctly guessed the villain once I had exhausted all the other possibilities.