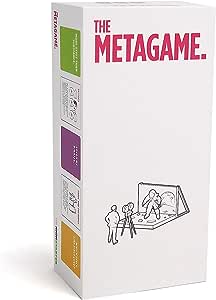 The Metagame by Local No. 12

Everyone has an opinion. The Metagame is a fun party game about sharing opinions on the most important debates of our time, like "which feels more like first love: The Mona Lisa or the Big Mac?" The Metagame includes culture cards that feature media, art, fashion and entertainment, and opinion cards that prompt lively chatter and lots of laughter.

The Metagame is more than one game—it includes six unique games. Some of the games get you talking. Others are about thinking fast. Some games are strategic and others are just plain silly.

Including 200 culture cards and 100 opinion cards, The Metagame scales from two to 33 players. Play it at a dinner party or a family gathering, at a bar or at school, or anywhere that humans gather.

Some opinions on The Metagame include:

"It’s a clever idea, it’s a beautiful box, it’s peerlessly modern, and it’s generous to the point that you're practically buying a format for games instead of a game. Oh, and it works. You can't play this game without having funny arguments and interesting discussions." - Quintin Smith, SHUT UP AND SIT DOWN "

"A clever, colorful set of tools that let you pose interesting questions to friends, and debate the relative merit of a weird, wild array of issues." - Leigh Alexander, BOINGBOING/OFFWORLD

"When you deal the Metagame deck, there are some wonderfully esoteric conundrums to be debated with the right mix of people and probably drinks." - Allison Meier, HYPERALLERGIC

"There are six games. Each is different. Each will make you laugh." - Bernie DeKoven, MAJOR FUN

Amazon Customer
4.0 out of 5 stars A fun card game that allowed a large group to share laughs
Reviewed in the United States on 8 January 2019
Verified Purchase
This was a gift, and I only played once as part of a group of 8. It was fun and provoked a higher quality of thought and humor than many of the recent flood of card games out there. That said, I can't speak to the other meta-games intended for 2, 3 or 4 players.
Read more
Helpful
Sending feedback...
Thank you for your feedback.
Sorry, we failed to record your vote. Please try again
Report abuse

D_Rod
5.0 out of 5 stars Quick Play Multiple Options
Reviewed in the United States on 2 December 2018
Verified Purchase
This game is great. The multiple playing options keeps the game going for hours, but the quick play style keeps everyone engaged. This is a great game to keep around for whenever you need some fun.
Read more
Helpful
Sending feedback...
Thank you for your feedback.
Sorry, we failed to record your vote. Please try again
Report abuse

Allison Villastrigo
1.0 out of 5 stars Wrong item!
Reviewed in the United States on 10 March 2019
Verified Purchase
We received a sci fi extension, not the game.
Read more
One person found this helpful
Helpful
Sending feedback...
Thank you for your feedback.
Sorry, we failed to record your vote. Please try again
Report abuse

Allison Shye
5.0 out of 5 stars So fun for game night
Reviewed in the United States on 26 June 2019
Verified Purchase
Played this at work, had to buy. If you love cards against humanity or anything in that being, you love this.
Read more
Helpful
Sending feedback...
Thank you for your feedback.
Sorry, we failed to record your vote. Please try again
Report abuse
Load more international reviews

Morgan G.
5.0 out of 5 stars ♥️♥️
Reviewed in the United States on 10 December 2018
Verified Purchase
Great family game or friend game night. Had us all in stitches
Read more
Helpful
Sending feedback...
Thank you for your feedback.
Sorry, we failed to record your vote. Please try again
Report abuse

Remsonfish
3.0 out of 5 stars Three Stars
Reviewed in the United States on 23 January 2018
Verified Purchase
It's a fun game. A bit expensive though.
Read more
Helpful
Sending feedback...
Thank you for your feedback.
Sorry, we failed to record your vote. Please try again
Report abuse

Michael Housser
5.0 out of 5 stars The cardsstcik together so you may want to buy sleeves for them
Reviewed in the United States on 8 February 2020
Verified Purchase
I loved it
Read more
Helpful
Sending feedback...
Thank you for your feedback.
Sorry, we failed to record your vote. Please try again
Report abuse