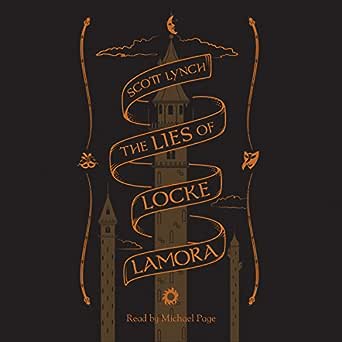 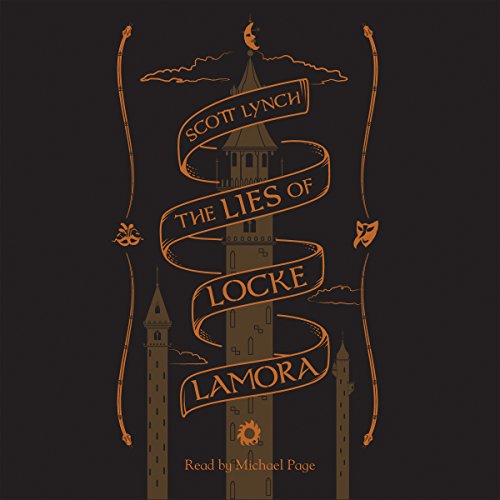 The Lies of Locke Lamora

4.5 out of 5 stars
4.5 out of 5
3,561 global ratings
How are ratings calculated?
To calculate the overall star rating and percentage breakdown by star, we don’t use a simple average. Instead, our system considers things like how recent a review is and if the reviewer bought the item on Amazon. It also analyses reviews to verify trustworthiness.

Mandy Abela
5.0 out of 5 stars Enjoyable to the end
Reviewed in Australia on 15 March 2019
Verified Purchase
While it took a while to get started for me, once the hooks were in, I enjoyed every step of the way.
Read more
Helpful
Report abuse

Amazon Customer
5.0 out of 5 stars One of the best fantasy and action novels
Reviewed in Australia on 28 October 2020
Verified Purchase
Full of twists and turns, witty and entertaining - quite a pleasure to read. It is quite satisfying to read this story in itself but definitely opens up the appetite for what happens next.
Read more
Helpful
Report abuse

bee-tee
3.0 out of 5 stars Three Stars
Reviewed in Australia on 2 August 2018
Verified Purchase
I found it a bit of a plod to get through.
Read more
Helpful
Report abuse

Kindle Customer
5.0 out of 5 stars Excellent
Reviewed in Australia on 21 November 2020
Verified Purchase
None of the usual fantasy tropes and is carried by its thoroughly lovable characters. Witty and surprising with a beautifully imagined world.
Read more
Helpful
Report abuse

Ben
5.0 out of 5 stars Highly recommended
Reviewed in Australia on 26 July 2018
Verified Purchase
Captured my attention from the very beginning and left me wanting more at the end. Can't wait to read the next one!
Read more
Helpful
Report abuse

Amazon Customer
5.0 out of 5 stars Loved it!!
Reviewed in Australia on 12 April 2014
Verified Purchase
loved it only book I've read more then once. best book i have ever read!! its original, witty and very funny.
my only problem was that it isn't long enough

Richard Wright
3.0 out of 5 stars Smug Adventuring
Reviewed in the United Kingdom on 9 August 2015
Verified Purchase
A book I couldn’t quite abandon, despite several times feeling the urge. The setup, probably a full quarter of the book, feels smug and contrived and takes forever to actually get anywhere, with the group of con-men known as The Gentlemen Bastards (lead by the titular Lamora) leading lives so charmed that any potential drama or intrigue is completely undercut. When, finally, the mysterious Grey King starts to make his presence felt in the (admittedly fascinating) city of Camorr there is a welcome injection of peril that begins to move things along at pace, and almost makes the insufferable setup worthwhile – the Bastards are thrown into levels of intrigue and danger far outwith their comfort zone, and the reader is finally carried along with them. The final quarter of the book seems to slow down just as it should be charging onwards, but scores are settled, daring escapes made, and intrigues resolved. None of this displeased me, but it’s too long by far and finishing it was ultimately a chore.
Read more
36 people found this helpful
Report abuse

Lily C
4.0 out of 5 stars And that’s why I like this book
Reviewed in the United Kingdom on 6 November 2016
Verified Purchase
Locke, you really are a little s***.

And that’s why I like this book. It’s clever, it’s often very funny, and the world-building is excellent. I know there have been comparisons between Lynch and Patrick Rothfuss – the latter even addressed this in his review of this novel – but I genuinely think that’s wrong. Both authors are distinct in their own ways, and I enjoy both writers’ works immensely.

That goes for The Lies of Locke Lamora. The chapters flip between present day Locke and interludes, where Locke is still a child, which gives the reader a nice insight into backstory. Initially I found the beginning of the novel difficult to get into, even considering putting it down, but I’m extremely glad I didn’t, for the sole reason that it very quickly turned into rip-roaring fun.

Fun. That is the word I would probably use to describe this book. It reads almost like a film – and I dearly hope some skilled director brings it to life one day, because it would be fantastic. The characters are well fleshed-out, the details of world-building tight and many. Locke’s wit and sarcasm is right up my street, and he is a character I quickly came to adore and despair at when he got himself into scrapes – which, by the way, is often. Oh, my god is it often. Little s*** indeed. There is mischief and mayhem aplenty, and what a joy it was to read.

Fantasy-lovers, if you have not yet read this book: WHY NOT? READ IT. READ. And then read the sequel, which I certainly plan to do.

It is enchanting, riotously funny, and above all, epic. Honestly, I could not recommend this enough.

Filipe P.
5.0 out of 5 stars absolute must read
Reviewed in the United Kingdom on 15 March 2020
Verified Purchase
Amazon

Thank you for submitting a customer review.

Thank you for submitting a customer review on Amazon. After carefully reviewing your submission, your review could not be posted to the website. While we appreciate your time and comments, reviews must adhere to the following guidelines:
Amazon Community Guidelines
The Lies of Locke Lamora ★★★★★ from Filipe P. on 12 March 2020

Context: I do not really know where or how I got this book, which probably means I got it in a charity shop somewhere in the UK. I decided to push it to the top of the reading pile after I had finished The Name of the Wind from Pat Rothfuss' The Kingkiller Chronicle and I found online many voices singing this novel's praises. And while, generally, I am not the biggest pirate tale aficionado (which was what I thought the book was going to be like), the scores on platforms like GoodReads got the best of me. Thankfully they did.

Ups: Characters. Oh, my days, Lynch's characters! Locke and Jean's relationship is stellar. And when you add the Sanza twins, Father Chains, Bug... The beginning is such a punch in the gut, and the ride never slows down. The city of Camorr feels very fleshed out like Lynch lived there his whole life and just decided to describe every single alleyway he strolled through over the years. I am a great fan of the Venetian/Renaissance Italy vibe chosen, which heightens the masquerade play Locke and the other Gentlemen Bastards star in. The plot is great, and I especially appreciate how it can go from bad to worse. Locke is very smart but he is not wise or particularly cunning. He has that Jack Sparrow swagger that gets him out of a sticky situation to place him in a direr one. The story feels like a rollercoaster, and I found myself yelling alongside the Bastards. Lynch's first novel is an amazing, amazing piece; as an aspiring author, reaching 1/10th of this greatness with a debut novel would be heavenly. Do yourself a favour and pick this one up.

Downs: for some people, the descriptions might be too much. Yet, akin to Robert Jordan in his WOT, it's down to preference. You might get fed up with the details, but it is undeniable how colorful and theatrical of a painting Lynch paints.

M. King
4.0 out of 5 stars Very entertaining read.
Reviewed in the United Kingdom on 28 May 2018
Verified Purchase
The synopsis on Amazon doesn’t do this any favours perhaps painting things a bit more light-hearted than they are. The story can be quite brutal at times but what stands out is the perfect balance of story, characters and world-building.

Just lost a bit of impetus in that, around the 3 quarter mark, things got a bit slow and there was even one god awful waste of an excessive number pages devoted to how Locke steals some new clothes.

But the story is inventive, exciting and emotional with some great characters.
Read more
4 people found this helpful
Report abuse

Mr. A. Flynn
5.0 out of 5 stars Sensational fantasy
Reviewed in the United Kingdom on 15 February 2020
Verified Purchase
I am and have been a fantasy literature fan since early adolescence and this is probably in my top five fantasy series ever along with the Wheel of Time, The Riftwar Saga, and A Game of Thrones.
Lamora is a fascinating fantasy character in that he relies almost exclusively on his wits and intelligence rather than physical prowess. The Gentleman Bastards as a group are touchingly brother-like and complement one another brilliantly. The world is realistically and interestingly crafted and the fight scenes in particular are a strength of the series.
Read more
One person found this helpful
Report abuse
See all reviews
Get FREE delivery with Amazon Prime
Prime members enjoy FREE Delivery and exclusive access to movies, TV shows, music, Kindle e-books, Twitch Prime, and more.
> Get Started
Back to top
Get to Know Us
Make Money with Us
Let Us Help You
And don't forget:
© 1996-2020, Amazon.com, Inc. or its affiliates