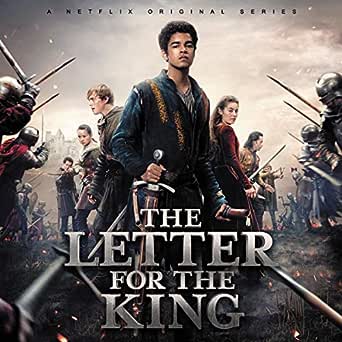 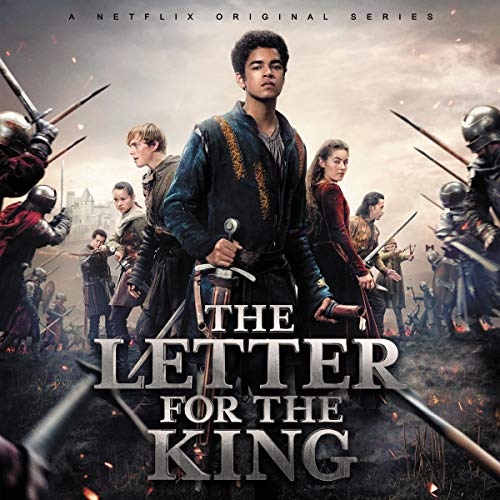 The Letter for the King

Alaran
3.0 out of 5 stars There and back again...and not much else
Reviewed in the United Kingdom on 3 May 2020
Verified Purchase
My opinion of this book is possibly somewhat marred by being inspired to read it after enjoying the television adaption. The television version is extremely loosely based upon this and, in comparison, I cannot help but find the novel a little simplistic and a tad tedious.

Mainly, this is because it possesses a very linear storyline, simply charting Tiuri’s journey across the land from Dagonaut to Unawen in an effort to deliver the message he inadvertently inherits. Then, with even less incidence, it covers his return trip home. It comes entirely from the lead protagonist’s perspective and the action never takes place anywhere but with him.

This means that a lot of the characters that featured heavily in the televised version lack much of a role even if they do appear. The lead villain, Prince Viridian, fails to even make an appearance and the love story angle with Lavinia is very superficial. However, Piak is a much more vital and developed character in the novel.
There is also no magic involved in the book.

The novel is clearly intended for children. There isn’t really much in it to recommend to an adult reader other than nostalgia orientated reasons. It feels like it is aimed at an eight or nine year old audience. But that was the age I read ‘Lord of the Rings’ and ‘The Chronicles of Narnia’ so against their higher concepts and more intricate plots I think this novel would have been fairly forgettable.

However, the prose is well composed and there is a certain charm possessed by the character of Tiuri who succeeds by generally being pleasant and determined. Although not enthralling, this makes it a pleasant enough read.

OCBB
5.0 out of 5 stars It falls to Tiuri to carry the message over the Great Mountains to the King
Reviewed in the United Kingdom on 3 September 2014
Verified Purchase
This is a classic which has been neglected for too many years. It is a story which can be read and appreciated on many levels.

Simply it is the tale of how a novitiate knight, Tiuri, on his vigil before he is knighted is persuaded by a mysterious old servant to carry a vital message to the Black Knight with the White Shield. The Knight is murdered by the treacherous Red Riders. It falls to Tiuri to carry the message over the Great Mountains to the King. The story recounts the setbacks and triumphs he encounters on his quest.

The novel has accurately been described as a page turner, and richly deserves to become a classis again.

I am eagerly awaiting the sequel "The Secret of the Wild Wood."

Yes! it is a children's book; it is deceptively easy to read but it contains many themes such as courage, loyalty, companionship and initiative which can be appreciated by readers of all ages.

Susanne Reinoehl
5.0 out of 5 stars one of the best children's books ever
Reviewed in the United Kingdom on 20 January 2014
Verified Purchase
This translation of a classic by Tonke Dragt has been so overdue! I've read the German version 30years ago and was keen to introduce it to my children. Depending on your child's maturity in reading I'd recommend it for ages 8plus at least.
Tiuri is a 'knight that is not a knight'- he is asked the night before his knighting ceremony to deliver a secret message to a faraway kingdom and so suddenly is thrown into a very much adult world with intrigue and scheming that has far reaching consequences, also for his own kingdom. He really gets to know the world outside his protected upbringing. An adventure story of growing up and facing one's own decisions, standing up for what is right and finding friendship/kinship on the way. Tiuri isn't a super-hero, he still is a 'boy' (hates that occasionally) and so the reader can identify with him.
Read more
22 people found this helpful
Helpful
Sending feedback...
Thank you for your feedback.
Sorry, we failed to record your vote. Please try again
Report abuse

Lisa Whitehead
5.0 out of 5 stars Fussy boy reader liked it 10/10!
Reviewed in the United Kingdom on 1 January 2017
Verified Purchase
I don't like to buy witchy books etc, so find it hard to get books for my 12 yr boy.
He is a good reader and got through this quickly as he enjoyed it so much.
Definitely recommend it.
Read more
10 people found this helpful
Helpful
Sending feedback...
Thank you for your feedback.
Sorry, we failed to record your vote. Please try again
Report abuse

Fussy
5.0 out of 5 stars Great story for young readers but also a page-turner for adults
Reviewed in the United Kingdom on 12 June 2016
Verified Purchase
An excellent discovery. Exciting quest story with beautiful descriptions of a woodland medieval world where evil or friendship await at every turn, to be negotiated with the hero Tiuri's good judgement, that of his loyal friend Piak, as well as with a bit of luck. Also, beautiful illustrations.This was only translated into English in 2013 but the lack of female roles reflects the period in which it was written - first published in Dutch in 1962. In the sequel, The Secrets of the Wild Wood (1965; 2015), Tonke Dragt makes up for this with strong female characters to counterbalance. Simpler than Tolkien, less fantastical; as much about teenage rights of passage and strong friendship bonds as Harry Potter but less modern - and also less fantastical! Success and loss along the way.
Read more
3 people found this helpful
Helpful
Sending feedback...
Thank you for your feedback.
Sorry, we failed to record your vote. Please try again
Report abuse
Load more international reviews

IgorStrav
5.0 out of 5 stars Enthralling
Reviewed in the United Kingdom on 20 November 2019
Verified Purchase
As an adult, I can confirm that this is an enthralling story which kept me wrapped in an alternative universe for a very enjoyable period of time.

Plenty of action, lots of interest, and exciting too.

april
5.0 out of 5 stars exciting
Reviewed in the United Kingdom on 25 February 2020
Verified Purchase
good adventure story, full of drama; good setting, good characters, good conflict...decent translation, no glaring errors...fairly slow pacing, which is building the plot solidly and calmly...good text for read-it-yourself or for reading aloud at bedtime...suitable for age 8 and up...
Read more
Helpful
Sending feedback...
Thank you for your feedback.
Sorry, we failed to record your vote. Please try again
Report abuse

KvZ or her husband
5.0 out of 5 stars Gripping story
Reviewed in the United Kingdom on 16 May 2020
Verified Purchase
I read this book when I was 10 years old in Dutch.
Just finished the English translation 37 years later, it is still a gripping story. Now my 10 year old daughter is reading it.
Don’t forget it is aimed at children so some parts can be a bit slow to read for adults.
Read more
Helpful
Sending feedback...
Thank you for your feedback.
Sorry, we failed to record your vote. Please try again
Report abuse

Antonio Nunes
5.0 out of 5 stars Excellent rendition of a great book.
Reviewed in the United Kingdom on 12 December 2014
Verified Purchase
Excellent rendering in English of my all time favourite children's book.

Quite a few reviews draw strong parallels with Tolkien's fantasy works. Don't be fooled by that. Tonke Dragt's works are every bit as great pieces of literature as Tolkien's but in their own independent way. She has her own eminently readable style, and this story in particular is not about a magical fantasy world. It takes shape in what could have been a very real world roughly half a millennium ago.

The story line is engaging and the main characters' behaviours and actions can speak to the imagination of children of all ages, fostering a more noble mode of interacting with the world and its challenges.

But, above all, it's simply a very good and engaging read. Enjoy!
Read more
3 people found this helpful
Helpful
Sending feedback...
Thank you for your feedback.
Sorry, we failed to record your vote. Please try again
Report abuse

G. Bethune
5.0 out of 5 stars Goodness Wins!!!!
Reviewed in the United Kingdom on 3 July 2014
Verified Purchase
What a lovely book, just great.

So many familiar tropes about growing up, and fantasy worlds and stories, but written in a refreshing winsome way. A story which relies upon finding trust and the belief in honour as the method for success. No martial prowess or trick special talent as a way to glory here just proper endevour and right behaviour. We can all behave like this and maybe we might win too.
Read more
One person found this helpful
Helpful
Sending feedback...
Thank you for your feedback.
Sorry, we failed to record your vote. Please try again
Report abuse
Load more international reviews

karen
5.0 out of 5 stars Enjoyed by mother and son
Reviewed in the United Kingdom on 16 September 2014
Verified Purchase
My 11-year-old son had just finished a marathon stint reading 'Lord of the Rings' and loved it so much he was reluctant to pick up any other book. I managed to tempt him with this, and he has thoroughly enjoyed it. I've read it too, and found it very engaging. It's a straight forward quest story, set in an imaginary land with a young heroic protagonist who has many obstacles to overcome. I think it's perfect for the 10-13 age group.
Read more
One person found this helpful
Helpful
Sending feedback...
Thank you for your feedback.
Sorry, we failed to record your vote. Please try again
Report abuse

TuscAdam
5.0 out of 5 stars Timeless and captivating
Reviewed in the United Kingdom on 29 December 2019
Verified Purchase
Have known this book in the original language and when it was originally published. Great story and well written. Travels trough the different generations without a problem.
Read more
Helpful
Sending feedback...
Thank you for your feedback.
Sorry, we failed to record your vote. Please try again
Report abuse

Gary Shaw
5.0 out of 5 stars The adult child.
Reviewed in the United Kingdom on 11 April 2020
Verified Purchase
Obviously, this is a book for the younger amongst us, but everyone else is allowed to languish in the wonderful land of justice, honour, and escapism.
Enjoy, my friends.
Read more
Helpful
Sending feedback...
Thank you for your feedback.
Sorry, we failed to record your vote. Please try again
Report abuse