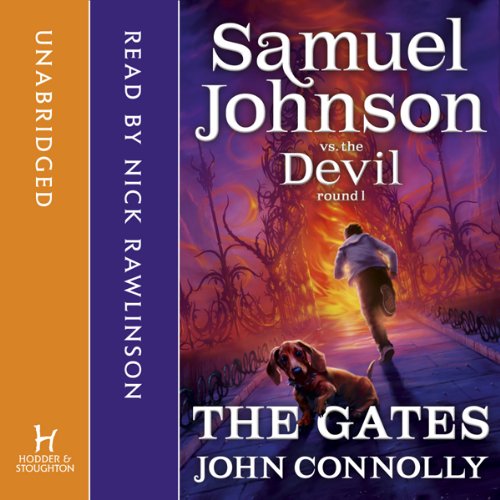 4.3 out of 5 stars
4.3 out of 5
289 global ratings
How are ratings calculated?
To calculate the overall star rating and percentage breakdown by star, we don’t use a simple average. Instead, our system considers things like how recent a review is and if the reviewer bought the item on Amazon. It also analyses reviews to verify trustworthiness.

Jilly Lycett
4.0 out of 5 stars The Gates
Reviewed in Australia on 3 January 2018
Verified Purchase
I read this because I'm a John Connolly fan. It's a kids' book, the first of a new series obviously intended for young boys mostly. He is obviously sick of Charlie, Louis and Angel and seeking a new audience. A pity. Not a fan anymore.
Read more
One person found this helpful
Helpful
Report abuse
See all reviews

Colin
4.0 out of 5 stars Horror for the young at heart
Reviewed in the United Kingdom on 18 May 2010
Verified Purchase
How do you categorise John Connolly, crime writer - yes certainly. Supernatural writer - well yes most of his crime novels have had a supernatural overtone so supernatural crime writer then. What about his book of horror short stories, Nocturnes - so that makes him a supernatural, crime, horror writer. Then there is his fantasy/fairy tale The Book Of Lost Things - so he is definitely a supernatural, crime, horror, fantasy writer. And then there is The Gates, damn it.....tell you what, lets just describe Connolly as one of the finest genre writers working today and lets hope The Gates is the book that lets everyone see the breadth of that talent.

Samuel Johnson and his dog Boswell (ha,ha) decide to get a head start on Halloween by trick or treating a few days early. Among the surprised neighbours to find a small boy dressed as a ghost on their doorstep are the Abernathys. The only problem is this quiet unassuming couple have invited some friends round and intend to open the Gates of hell. Only Samuel, Boswell a couple of friends and a demon called Nurd can prevent this catastrophe.

Quite unlike anything Connolly has written before, although there were hints with The Book Of Lost Things, The Gates is a laugh out loud fantasy. The problem with most comedy fantasy is that it's either not very funny (recent Terry Pratchett, Unseen Academicals excepted) or it's funny but with a convoluted i.e. not very good plot (are you listening Mr Rankin). Douglas Adams was one of the few writers who could consistently pull off humorous writing. John Connolly is a naturally funny guy, at a recent reading he had the audience in stitches with his observations on the Da Vinci code etc. and thankfully this has come through well in this story.

John Connolly has drawn on recent worries about the Large Hadron Collider and the completely bizarre world of particle physics to create a plot which whilst simple is also clever and well constructed. The footnotes throughout again reminded me of Adams, taking a sideways look at particle physics and explaining concepts in simple and often hilarious ways. The clever nods to horror writers of the past which are scattered throughout are also nice. John Connolly is a man who understands the horror genre.

This is a book aimed largely at the young adult market but one which could be enjoyed by all. At times genuinely emotionally engaging the characters are all interesting and well drawn. The characterisation can be compared with Gaiman's The Graveyard Book and although The Gates has a much lighter tone there are many similarities between the two novels.

My biggest complaint is only that when the book was announced I felt sure we were finally going to get the full blown horror epic that John Connolly is surely destined to write. This isn't it but hopefully the widespread appeal of this book will raise John Connolly's profile and maybe, just maybe that great horror novel is still coming.
Read more
7 people found this helpful
Report abuse

Ursula
5.0 out of 5 stars Absolutely brilliant
Reviewed in the United Kingdom on 10 October 2018
Verified Purchase
I'm a huge fan of John Connolly but having read all the Charlie Parker series to date I decided to check out his other works. While The Gates is aimed at a younger audience, it is a hugely enjoyable read for adults too. It is definitely nothing like the Charlie Parker books which only adds to the enjoyment. I'm looking forward to reading part two now.
Read more
Report abuse

Jacobite
5.0 out of 5 stars Bravo Mr Connolly!
Reviewed in the United Kingdom on 3 April 2018
Verified Purchase
An impulse buy because I enjoy this author's "Charlie Parker" series. I'm well outside the age range this is targeted at - but am thoroughly enjoying it.
Good jokes, interesting footnotes and nicely-drawn characters.
Refreshingly British in setting, style, grammar and spelling.
Read more
Report abuse

C
5.0 out of 5 stars Chuckled my way through
Reviewed in the United Kingdom on 31 August 2019
Verified Purchase
While the protagonists are children, this should appeal to anyone with a sense of humour. Cleverly written, very entertaining- as ever.
Read more
Report abuse

Mick
5.0 out of 5 stars Laugh out loud
Reviewed in the United Kingdom on 7 November 2019
Verified Purchase
Not sure what I bought as I love all the other John Connolly books (Charlie Parker series) this had me laughing out loud, loved the humour. Have bought the next in the series.
Read more
Report abuse
See all reviews
Back to top
Get to Know Us
Make Money with Us
Let Us Help You
And don't forget:
© 1996-2021, Amazon.com, Inc. or its affiliates