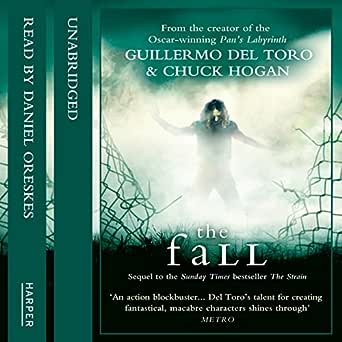 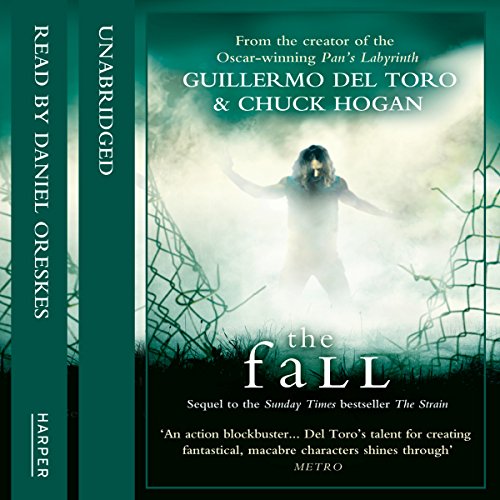 4.5 out of 5 stars
4.5 out of 5
998 global ratings
How are ratings calculated?
To calculate the overall star rating and percentage breakdown by star, we don’t use a simple average. Instead, our system considers things like how recent a review is and if the reviewer bought the item on Amazon. It also analyses reviews to verify trustworthiness.

John Milton
4.0 out of 5 stars A sequel that's superior to the original
Reviewed in the United Kingdom on 8 June 2012
Verified Purchase
This is the second novel in Guillermo Del Toro's The Strain trilogy.

This sequel sees New York being taken over by vampires and a corrupt government and officials covering up the true nature of the disaster facing mankind. Once again, Del Toro and co-write Chuck Hogan show their eye for a movie and this novel reads very much like it is geared towards screen adaptation. However, it would seem that the authors have stepped up their game considerably after setting the scene with The Strain. The Fall really delivers the goods, is not as derivative as its predecessor and takes a vampire tale to a level I have never seen on the big or small screen.

Much like The Strain, The Fall reads very much as a high paced action horror but has a distinctly gloomier tone than most vampire stories. Hell, the vampires are winning here! Some say that this tone is depressing. I would suggest that if you are reading horror novels then you aren't particularly in the market for something lighthearted and ought to have read the book sleeve before you cracked the spine.

Perhaps due to the fact that this is the second novel in the trilogy, I felt that overall the character development was much better in The Fall. New characters were introduced that I genuinely felt compassion for and think many of the characters are not the tired clichés seen in so much vampire fiction. My personal favourite and one worth watching out for (who doesn't get near enough page space!) is Angel Guzman Hurtado. I'll leave it to you to find out more!

The Fall is a superior sequel to The Strain but with hindsight, The Strain set this up nicely.
Read more
9 people found this helpful
Report abuse

Sussman
5.0 out of 5 stars Vampires like using New York Subway System
Reviewed in the United Kingdom on 18 November 2013
Verified Purchase
The Second book in the trilogy picks up almost immediately after the conclusion of `The Strain', and chronicles the horrendous manifestations of the following three weeks or so (with added back story, told through flashbacks concerning Setrakian) as the vampires take Manhattan --- and beyond like a pandemic, the likes of which Mankind has never seen--- and civilization begins to crumble. Our modern day Vampire enabler and top Corporate CEO Palmer uses his quiet influence to compel a news blackout concerning the true nature of what is really going on. The disappearances and deaths are blamed on a virus, and there is no meaningful resistance to the ever-growing number of vampires. Setrakian is confident that a legendary ancient book, long lost to history, will contain the answer to defeating the Master once and for all. Goodweather, has other ideas, as he plots an assassination attempt that he believes will upset the uneasy 'force multiplier' of Palmer and the Master. For the rest, you will have to read the book!

The real narrative, however; for me, takes place in the streets of New York, in the shuttered tenements, and other vacated buildings, and in subway tunnels where vampires, use them like `rat runs' and emerge to hunt for food. For those that try to fight, they are scattered valiant but doomed. THE FALL is believable and frightening.
Read more
One person found this helpful
Report abuse

The strongest book of The Strain trilogy, The Fall opens up a lot more of a world of vampiric history and development. The book continues in the style of the first book with a hugely interesting idea, incorporating elements of religion, body-horror and old-fashioned hard-boiled detective-type feels. The book retains the frustrating head-hopping elements of its prequel, but I found this forgivable when turning this into a much larger world-building experience with exciting promise for the final book in the season.
Read more
One person found this helpful
Report abuse

Tremse
5.0 out of 5 stars A good, gritty sequel
Reviewed in the United Kingdom on 8 September 2011
Verified Purchase
I read `The Strain' earlier this year and loved it. It was a long wait for the second book in the trilogy but 'The Fall' was well worth that wait.

Continuing immediately where the first book left off, 'The Fall' manages to weave together all sorts of vampire law but in a gritty reality rather that the romanticised 'Twilight' type image of a Vampire as well as filling in a few gaps in the background of Setrakian, the Vampire "expert". It moves at a good pace and I would love to see the story turned into a film directed by Guillermo Del Toro.

Can't wait for the final book in the trilogy.
Read more
Report abuse

Pazuzu
4.0 out of 5 stars The Fall: the first book is let down by the next two instalments
Reviewed in the United Kingdom on 3 February 2015
Verified Purchase
The first book is sound and enjoyable. After that the second and third books become seemingly longer, more turgid and infinitely less enjoyable. In the second and third book I shamefully found myself speed reading parts as it was dull, over long and just a bit unnecessary.

The first book is good but I cannot wholeheartedly recommend it as it means you may feel obliged to read the other two. On that basis it is probably wiser to move along and choose another title.
Read more
Report abuse
See all reviews
Back to top
Get to Know Us
Make Money with Us
Let Us Help You
And don't forget:
© 1996-2021, Amazon.com, Inc. or its affiliates