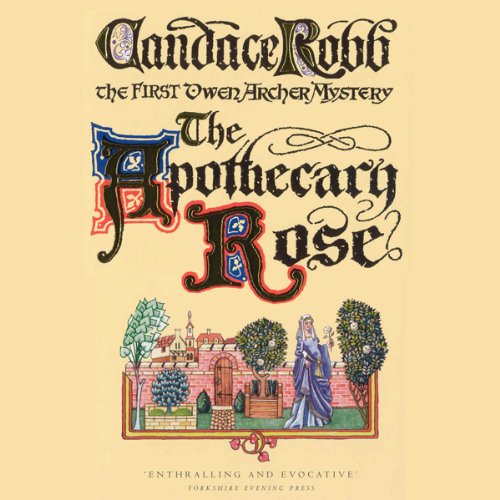 4.4 out of 5 stars
4.4 out of 5
452 global ratings
How are ratings calculated?
To calculate the overall star rating and percentage breakdown by star, we don’t use a simple average. Instead, our system considers things like how recent a review is and if the reviewer bought the item on Amazon. It also analyses reviews to verify trustworthiness.

Linda Lee
4.0 out of 5 stars A Mystery Well Pursueing
Reviewed in Australia on 19 January 2021
Verified Purchase
I liked the main character and the setting. In general I thought it was a well written murder mystery with a main character who could make mistakes and a good knowledge of the medieval times in which he lives I have since read all of the Owen Archer books and hope for more to follow.
Read more
Helpful
Report abuse
See all reviews

Clemens A. Schoonderwoert
4.0 out of 5 stars A Very Promising Owen Archer Opener!
Reviewed in the United Kingdom on 9 December 2020
Verified Purchase
**4.25 STARS**

This first instalment of, for me a new series, has been a very pleasant experience, in so far that the book has given me great joy reading it.

The reason for my pleasure is quite simple; the story-telling is of a superb quality, all characters, whether real historical or wonderful fictional, come all vividly to life within this mystery, while the atmosphere of medieval York in AD 1363, under the reign of King Edward III, comes very realistically off the pages.

At the front of the book you'll find a short excerpt from Geoffrey Chaucer's "The Parlement of Foules", and a very well-drawn map of York, England, in the 14th Century, as well as a short Glossary.

At the back of the book you'll notice an Author's Note, where the historical details concerning this period of history are superbly documented and explained, and these details are wonderfully implemented within this historical mystery.

The book starts off with a prologue in which we find Brother Wulfstan, Infirmarian of St Mary's Abbey, fretting about the deaths of first his friend, the kind Pilgrim, and secondly about the death of the Archbishop's Ward, Sir Oswald Fitzwilliam, both by some kind of poison, and also involved are his dear friends the Apothecary, Nicholas Wilton and his wife, Lucie.

Right from chapter one comes our protagonist, Owen Archer, former Welsh Captain of Archers, into the picture to make his presence felt, after having been sent to York in disguise, as the Apothecary's apprentice, to investigate these murders for his employer, the Archbishop and Lord Chancellor of England, John Thoresby, and unravel the political and ecclesiastical implications.

What follows is an intriguing medieval mystery, where personal secrets will play an important part, although the mystery side of the story is somewhat to easy to solve, but on the other hand the sickly misconduct of a certain pervert cleric is very well brought forward here, in a sense that instead the culprit is condemned he will be revered as a saint within the mighty Church, all in effort the keep the Peace from between the mighty High till very Low within the Church, and the living outside world.

Highly recommended, although this series is not yet up to the same standard, but I hope it will be soon, as Paul Doherty's "Brother Athelstan" series which are set in London, while this series is set in medieval York, but what they do have in common is that they are both set somewhat around the same time of history, and to come back to this episode I like to call it: "A Very Promising Owen Archer Opener"!
Read more
One person found this helpful
Report abuse

mairi smyth
5.0 out of 5 stars Outstnding
Reviewed in the United Kingdom on 16 November 2020
Verified Purchase
This was perfect book for me. The author created so many good word pictures , I was tansported back in time. There is no way to be certain just how accurate life in 14c York was depicted. but we were given a very atmopheric and believable setting for ths tale. The plot was if its time, when the church had great power over lives and women had very little over their own lives. The intriguing twists and turns of the story wee very clever, at the same time no so comlicate as to be obscure. The characters were believable , in short my kind of reading. Just too bad the serirs is so expensive.
ps. Where is the island if England. I think a lile slip up in the autor's note.
Mairi Smyth Ayrshire.
'
Read more
Report abuse

Grampar
3.0 out of 5 stars Mill's and Robb?
Reviewed in the United Kingdom on 22 August 2017
Verified Purchase
Reading the Historical Note at the end of this supposed medieval tale O had some sympathy but as an historical novel it fell very short of anything from history. The story was a romance that could, with slight character adjustments, have been in any century. As a Scot with Highland blood U am annoyed that the Author used the term Highlander to describe what could have been Scottish bandits most of whom would be borderers or LOWLAND Scots. These bandits,like their Northumbrian and Cumbrian counterparts, were called reivers who were cattle thieves but we're not incapable of other crimes. Highlander in a purely Scottish sense came from the North and West of Scotland some considerable distance from the borders never mind York.
As a romance it worked. As a mystery novel it had its good bits. As a story that could be associated with a particular historical period and give us a flavour of the fourteenth century? No way. Where were known historical people or events? Good story wrong genre. Don't think I will be following Mr. Archers career.
Read more
2 people found this helpful
Report abuse

Fantasy Reader
5.0 out of 5 stars An excellent mystery book in the style of Peter Ellis
Reviewed in the United Kingdom on 12 August 2015
Verified Purchase
An excellent mystery book in the style of Peter Ellis's Brother Cadfael books .
The book is set in the Middle Ages in York when the church and army are two powerful political adversaries and friends, where all sorts from Lord to pauper, and murder to innocent hide under the powerful cloaks of both either serving the country or being a moral upstanding God fearing man; and were lesser individuals exist if they are allowed to.
The main character Owen,Archer finds himself released from one service,after loosing an eye, and being received into the service of another, The Archbishop, Thoresbury. In this book, Archbishop Thoresbury sends Archer to investigate the death of his ward Fitzwilliam who has died unexpectedly.
In the book Candance Robb has captured the essence of life in the reign of Edward III and in particularly the church and armies influences, the political minefields of the common man and his powerlessness against both the army and the church, and that of the gentry - not all as positive as it may seem.
An excellent read !
Read more
2 people found this helpful
Report abuse

Mrs. Bruce
4.0 out of 5 stars Reminded me a bit of Cadfael books
Reviewed in the United Kingdom on 27 January 2017
Verified Purchase
I liked the character of Owen Archer. He was an ex-soldier with one eye and now employed
by the Archbishop to investigate the death of his wayward ward in York. He had to pretend to
want work and be employed as an apprentice to Lucie Wilton, the wife of Master Apothecary, Nicholas.
Nicholas had been ill since the death of a pilgrim at the Abbey.

Owen's investigation took him to the Abbey and to the Archdeacon who seemed to have an unhealthy
interest in Nicholas. I did find the last quarter of the book a bit repetitive when various characters went
over what happened to Lucie's mother years before, and also when Owen grew more infatuated with Lucie.
However, overall I enjoyed the book and would read more in the series.
Read more
One person found this helpful
Report abuse
See all reviews
Back to top
Get to Know Us
Make Money with Us
Let Us Help You
And don't forget:
© 1996-2021, Amazon.com, Inc. or its affiliates