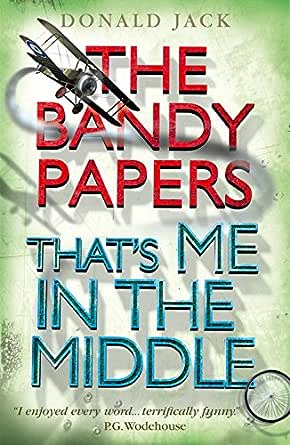 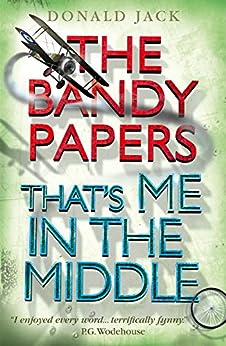 That's Me in the Middle (The Bandy Papers Book 2)

"Donald Jack has as light a touch with this fragile art as his hero has on throttle of a Sopwith Camel." * New York Times * "Bartholomew Bandy is the most remarkable hero (or anti-hero) since Harold Lloyd impersonated the Freshman." * Chicago Tribune * "To know Bandy is to love him . . . you tend to gallop through and come hurtling out at the end panting for more." * The Sunday Sun * "The Bandy Papers deserve to be read in private where insane giggling can go unnoticed." -- Jack Granatstein "I enjoyed every word . . . terrifically funny." -- P.G. Wodehouse --This text refers to the kindle_edition edition.

Bandy has become an air ace. On the ground he causes disasters wherever he goes, but in the air he’s deadly, shooting down dozens of German planes in the course of thrilling aerial combats. To the amazement of all who know him he becomes Lieut. Col. Bandy and thanks to his new rank he meets all sorts of people, including his fiancee’s memorable family. As a handy (but disposable) war hero, he encounters a number of hair-raising adventures, not to mention English plumbing and an unforgettable honeymoon night. That’s Me In The Middle is exciting, full of military action in the trenches and in the air, and, as it continues to flirt with history, very funny. --This text refers to the kindle_edition edition.

Donald Lamont Jack was born in Radcliffe, England,on December 6, 1924. He attended Bury Grammar School in Lancashire, and later Marr College, Troon (from which he was briefly evicted after writing an injudicious letter to the editor). From 1943 to 1947 he served in the Royal Air Force as an AC, or aircraftsman, working in radio communications. During his military service Jack was stationed in a variety of locales, though he concentrated on places beginning with the letter 'B': Belgium, Berlin, and Bahrain. After de-mobbing, he participated in amateur dramatics with The Ellis Players, and worked for several years in Britain, but he had by then grown weary of 'B'-countries and decided to move on to the 'C's. Thus, in 1951, Jack emigrated to Canada. In 1962 he published his first novel, Three Cheers for Me, about fictional Canadian First World War air-ace Bartholomew Wolfe Bandy. Three Cheers for Me won the Leacock Medal for Humour in 1963, but additional volumes did not appear until a decade later when a revised version of the book was published, along with a second volume, That's Me in the Middle, which won Jack a second Leacock Medal in 1974. He received a third award in 1980 for Me Bandy, You Cissie. Jack returned to live in England in 1986, where he continued to work on additional volumes in the Bandy series. He died on June 2, 2003. His final novel, Stalin vs. Me, was first published posthumously in 2005. --This text refers to the kindle_edition edition.
Read more

Peter Scott
5.0 out of 5 stars Whitehall Farce on a Grand scale.
Reviewed in the United Kingdom on 25 February 2017
Verified Purchase
That's Me in the Middle (The Bandy Papers Volume 2) by Donald Jack
Reminiscent of a truly wonderful Whitehall Farce on a Grand scale. The end of the book came far too soon! Our accidental hero gets married, causes chaos back at the war for a short while, back to the R.F.C. which becomes the R.A.F., gets involved, reluctantly, in other people's affairs, and eventually sees 'revenge!' Brilliant story. Loved every minute! Now for the next book!

Tony
1.0 out of 5 stars Very poor.
Reviewed in the United Kingdom on 1 February 2019
Verified Purchase
Short stilted sentences that make it difficult to read. Desperate attempts at humour that don't work. Lots of technical inaccuracies. I struggled to finish it and wish i hadn't bothered. Gone to the charity shop.
Read more
Report abuse

chris
5.0 out of 5 stars Great read
Reviewed in the United Kingdom on 20 February 2018
Verified Purchase
Volume 2 is as funny as volume1.
A laugh out loud caper of epic portions.
Our hapless hero Bandy causing chaos where ever he goes.
Read more
Report abuse
See all reviews
Get FREE delivery with Amazon Prime
Prime members enjoy FREE Delivery and exclusive access to movies, TV shows, music, Kindle e-books, Twitch Prime, and more.
> Get Started
Back to top
Get to Know Us
Make Money with Us
Let Us Help You
And don't forget:
© 1996-2020, Amazon.com, Inc. or its affiliates