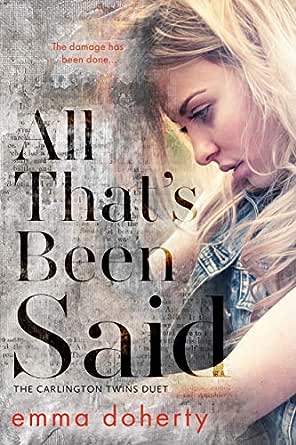 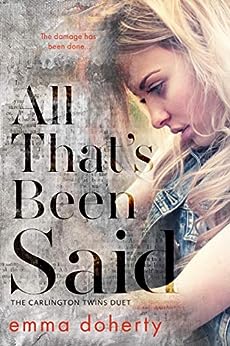 Izzy Kavanagh hates her new life in the US; that much she’s made obvious. She’s done everything she can to alienate her twin, Ethan, and to prove she doesn’t want to be there.

Perhaps a little too much.

Suddenly the idea of having her brother hate her isn’t what she wants. Knowing her mother would be ashamed of her behaviour weighs on her mind, and the idea of having someone who cares about her isn’t so bad after all. Then there’s her brother’s best friend, Finn. No matter how much she wants to ignore him and pretend she doesn’t care about his opinion, he always seems to be there, and it’s getting harder and harder to act like she’s indifferent to him.

But the damage has been done, and now all she can do is count down the days until she’s allowed to return to the UK and forget all about her time in the US.

That’s what she’s wanted all along…right?

Amazon Customer
5.0 out of 5 stars Always delivers
23 January 2020
Format: Kindle Edition
Emma Doherty is an absolutely fantastic writer. Her stories are heart felt and have real depth despite often being centred around teenage life. I loved how these books focused on the brother and sister not just another romance, although I did love Finn. Izzy is flawed and beautifully written. Well done Emma!
Read more
Helpful
Comment Report abuse
See all 1 customer reviews
Write a customer review

Raquel
4.0 out of 5 stars Deducted one star for "sat" and "stood."
13 November 2019 - Published on Amazon.com
Format: Kindle EditionVerified Purchase
Loved the ending of this book. Would actually purchase book 3 if there was ever one written; just to see where the twins end up and if Finn & Izzy stay together. This is a great book but can't give it 5 stars because of the editing. This one has the same errors as the first book with her using sat and stood incorrectly. The mistakes were so glaringly obvious that it distracted from the actual story.
I started following this author after loving Four Doors Down and Four Years Later but after reading this two book series it feels like both series were written by different people and not the same person. The writing styles and the grammar/editing were completely different in both series.
I will continue reading books written by this author because I really do enjoy reading her stories. I just hope that she has a couple editors proofread her stories before actually publishing them.

Book Nerdy
5.0 out of 5 stars She does it again ,the sequel is even better than the first book.
9 November 2019 - Published on Amazon.com
Format: Kindle EditionVerified Purchase
The relationship between the twins is really damaged after Izzys bad choices .
She wanted Ethan to hate her only so she could feel at least a little bit less guilty after the death of their mother .

The thing is she doesn’t , to top it she starts to worry to much of what Ethan best friend Finn thinks of her . And why is that ? She should just count the days to her 18 birthday when she can finally go back to her beloved England , far away from Ethan , father and grandparents. But why does she starts to rethink going back to England ?

This book tells the story of how difficult it is to cope with grief and how complicate things can get when pride it’s the biggest obstacle . It’s a wonderful book about the difficulty of being a teenager and the relationship between siblings, how we hurt the ones we love the most but also the importance of forgiveness.

TAUNYA MILLER
4.0 out of 5 stars Lovely story. Couldn't put it down!
12 November 2019 - Published on Amazon.com
Format: Kindle Edition
All That's Been Said by Emma Doherty

*I received this ARC in exchange for a fair and honest review.*

I came in to this story in the middle, as I have not read the first book of the series. However, I was able to pick it up and understand as if it were a standalone. It was a fast read. I couldn't put it down.

Anyone who has ever been through the loss of a loved one will understand Izzy. The things that she does to try to get through her grief are not uncommon, not for adults and especially not for teens. Life is a rollercoaster as it is. How she evolves and how her relationship with her twin brother strengthens throughout the book is a beautiful story.

The only reason I gave 4 out of 5 stars was that I felt with this book being geared towards YA, the language was a bit strong. Now had it been geared more towards the older age group (like me for instance), I would definitely given it 5 out 5 stars. Regardless, it is an amazing book that teaches a lesson. Everyone is going through something, be kind, everyone needs someone, and you don't have to go through it alone.

Thank you Ms. Doherty, for a beautiful well written story.

tmarie
4.0 out of 5 stars A good conclusion? wait...no the story isn't over
10 November 2019 - Published on Amazon.com
Format: Kindle Edition
I ended the first book disappointed because it was being continued into a second book. So I was very glad when the second? book was also offered up for free in exchange for an honest review. Again the story doesn't disappoint and the emotional roller coaster continues. What disappoints me, the reason for only four stars, is while the story line seems to be wrapped up the book ends with a comment about another book which continues the story along with a teaser for another book starring minor characters from this one. If this is supposed to be an ongoing series I would have loved to know it from the beginning.
Read more
One person found this helpful

All That's Left is an amazing story where you don't realize you've fallen for the characters until it's too late, but All That's Been Said brings the world of Izzy and Ethan to a whole new lever.

With intense, honest depictions of hope and rejection, All That's Been Said will break your heart. With Ethan, Izzy and Finn not backing down, finding love and belonging where you least expected it, your heart and soul will grab hold of your emotions from the first page, and it won't let go until you've reached the very end.

Beautifully written and richly textured!
Read more
Go to Amazon.com to see all 25 reviews 4.7 out of 5 stars
Get FREE delivery with Amazon Prime
Prime members enjoy FREE Delivery and exclusive access to movies, TV shows, music, Kindle e-books, Twitch Prime, and more.
> Get Started
Back to top
Get to Know Us
Make Money with Us
Let Us Help You
And don't forget:
© 1996-2020, Amazon.com, Inc. or its affiliates