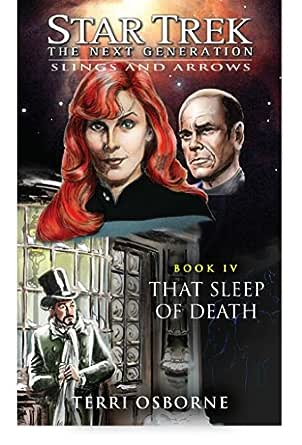 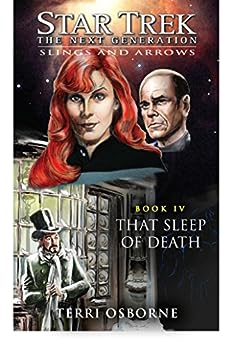 That Sleep of Death: Slings and Arrows #4 (Star Trek: The Next Generation) Kindle Edition

TERRI OSBORNE made her professional fiction writing debut in 2003 with the critically acclaimed “Three Sides to Every Story,” the Jake Sisko and Tora Ziyal story in the Star Trek: Deep Space Nine tenthanniversary anthology, Prophecy and Change. Her other fiction work includes “ ‘Q’uandary,” the Selar story in the Star Trek: New Frontier anthology No Limits; Star Trek: S.C.E.: Malefictorum, the landmark fiftieth installment in the series; and “Eighteen Minutes” in the tenth-anniversary anthology Star Trek: Voyager: Distant Shores. Beyond that, she is hard at work at more fiction, both in and out of the Star Trek universe, including an original dark fantasy novel set in Dublin, Ireland in 1940. Find out more about Terri at her Web site: www.terriosborne.com. --This text refers to an out of print or unavailable edition of this title.

3.1 out of 5 stars
3.1 out of 5
9 global ratings
How are ratings calculated?
To calculate the overall star rating and percentage breakdown by star, we don’t use a simple average. Instead, our system considers things like how recent a review is and if the reviewer bought the item on Amazon. It also analyses reviews to verify trustworthiness.

P. Kingsley
5.0 out of 5 stars Short but sweet
Reviewed in the United Kingdom on 17 September 2012
Verified Purchase
The story was well written and captured the characters perfectly. The EMH was wonderfully annoying, and the medical jargon believable. The story was interesting and my only complaint was that it was too short! A very good story.
Read more
Report abuse

PraxJarvin
2.0 out of 5 stars Decent Story Marred by Short Length for the Price
Reviewed in the United States on 13 June 2011
Verified Purchase
The fourth Slings and Arrows novella brings us the shortest installment (~600 kindle locations or 1/8 the length of a normal Trek novel). Overall, That Sleep of Death, isn't a bad read, but the mystery is tepid, leading to essentially a character piece. Normally this would be great, but with such little time and the plot dominating it, I wasn't quite sure what the point of the character study was. We have Crusher who's putting on a version of the Christmas Carol, which could have used some more time, and her reactions to the EMH (Minor Continuity slip: Crusher implies she'd never used one before in First Contact) which seem rather overdone for minor quibbles. This is now the third Slings and Arrows novella to be based around a concept from DS9 and the fourth of four to mention the station or events from the 4th season in general. It seems like it is less and less a celebration of TNG and a backdoor DS9 novel. I was happy with Barclay's depiction in this story and wish we could have gotten more time with that. Lt. Daniels is named dropped in this book but doesn't appear and Lt. Hawk remains heard of but not seen for the 3 novella in a row.

The book is drastically short for the price Simon and Schuster are charging, and it's shameful. I dropped the star rating a whole point because of it. As well, there are no chapter markers in this book. Granted its so short it doesn't matter, but it's quite annoying to not have any idea when a chapter might end.

Ron
1.0 out of 5 stars Way, way too short for the price paid.
Reviewed in the United States on 16 April 2010
Verified Purchase
The story line for this book is fine, the writing quality, etc. is also good. My beef is that Amazon is charging 5.99 for this ebook and it is very short - a short story at best. Kindle users will relate - this book is only slightly over 600 placemarkers (no "pages" on a Kindle book). Most books I've purchased for $6.00 are 4 or 5 times as long. Bottom line - I paid $6.00 for the book and finished reading it in about 45 minutes - not a good value. Other books in this series are short but this one is just a rip-off for the price.
Read more
One person found this helpful
Report abuse

Alice the BAD
3.0 out of 5 stars Slings and Arrows #4
Reviewed in the United States on 21 January 2013
Verified Purchase
This series was a little light reading - a little too short for the price - would have preferred this all in one novel
Read more
Report abuse
See all reviews
Get FREE delivery with Amazon Prime
Prime members enjoy FREE Delivery and exclusive access to movies, TV shows, music, Kindle e-books, Twitch Prime, and more.
> Get Started
Back to top
Get to Know Us
Make Money with Us
Let Us Help You
And don't forget:
© 1996-2020, Amazon.com, Inc. or its affiliates