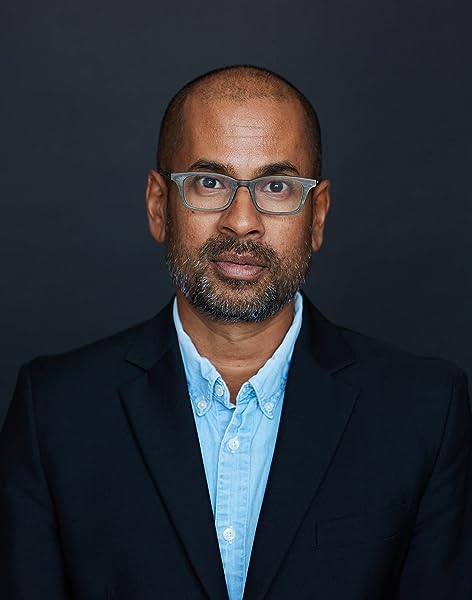 by Rumaan Alam (Author)
3.5 out of 5 stars 167 ratings
See all formats and editions
Sorry, there was a problem loading this page. Try again.

"That Kind of Mother is a thought-provoking story about what happens when a beloved nanny dies, leaving her own child motherless. Exploring themes of race, privilege, and family, Alam's second novel will leave you thinking about it long after finishing."--Popsugar

"Alam proves he is a writer brave and empathetic enough not only to look at life from the perspective of another gender and era, but also to boldly dive in and explore controversial topics...Alam cements his status as that kind of writer: insightful, intrepid, and truly impressive."--Kirkus Reviews (starred review)

"Quietly brilliant...Alam's unerring yet unobtrusive eye asks uncomfortable questions: Can motherhood ever look beyond race? Can we learn to recognize the terrible blindness of our respective cultural perspectives?.... A stunning accomplishment."--Booklist (starred review)

"Coming off his celebrated debut Rich and Pretty, Rumaan Alam's sophomore novel returns to themes of family and culture in a powerful tale of a white mother raising a black son."--Entertainment Weekly

"Incisive...Alam skillfully tackles issues of race and parenthood...The novel offers a memorable depiction of a mother's journey as her children grow and her marriage collapses."--Publishers Weekly

"Laced with humor and remarkably rich in detail...thrills in its attention to nuance...Alam's generous rendering rings authentic."--Entertainment Weekly

"Riveting..an outstanding depiction of motherhood and cross-racial adoption...The tensions of privilege and identity are brilliantly set against the backdrop of wealthy American cities, and Alam's pacing is phenomenal...An astonishing book."--Washington Post

"Mothers were big at the box office in 2017 (think: Lady Bird, mother!, I, Tonya). Rumaan Alam promises the same return on investment with his second novel."--In Style

"I read That Kind of Mother slowly, to savor it... [it] is a novel that is also a way of helping contemporary readers with our current silences and fraught dialogues."--The Millions

"That Kind of Mother's greatest triumph is its insistence on complicating the rescue narrative of transracial adoption without resorting to dogmatic indictments of its characters....the novel also reveals the extent to which Alam is attuned to the concerns and candor of women."--The Atlantic

"[Alam's] is a voice we want to read on just about every issue. In this novel, the issues he addresses are parenting, race, class, and privilege, and he explores these fraught topics with his trademark wit and sensitivity, never pandering or veering into cliche."--Nylon Magazine

"[A]n exploration of race, class, and power -- as well as a fascinating look at the evolution of one woman's mind over decades. Alam is uniquely well-suited to write this story of adoption."--Refinery29.com

"A rich, complex, beautifully observed story about the collision of class, race and family. Motherhood is an overwhelming and joyful job and this book takes on the minutia of that domestic sphere with quiet, but incendiary power."--Stephanie Powell Watts, author of No One is Coming to Save Us

"Alam's second novel, about two families brought together by the death of a beloved nanny, expertly and intrepidly blends topics of the zeitgeist, including race, privilege, and motherhood, without sacrificing elegant prose and signature wit."--Vogue.com

"Alam's sharp narrative asides--lines like "Some percentage of the things she did for the children were actually for her"--carry such weight and truth that we trust his route toward the bigger question of the book: are we ever ready for the pain and joy that life delivers."--The Millions

"Dives deep into big questions about parenthood, adoption, and race...With his unerring eye for nuance and unsparing sense of irony, Rumaan Alam's second novel is both heartfelt and thought-provoking."--Celeste Ng

"From [a] heartbreaking premise, Alam plumbs still more heartbreaking questions about the power and limitations of maternal love, and the implacable persistence of racial divides."--Huffington Post

"One of the glories of this novel, as it tracks Rebecca through 1999, is its compassionate exploration of individuals reaching across racial and class divides to create family."--BBC.com

"This gorgeous book calls into question all our assumptions - about family and tribe, race and loyalty, privilege and paucity. Brave, sharp and empathetic, Rumaan Alam shows us motherhood as I've never seen it: at once a quotidian labor and a radical and transformative excavation of the self."--Danzy Senna, author of New People

"This is a thought-provoking story about family, race, and the bond between mothers."--Bookish

It's 1985, and like many first-time mothers, Rebecca Stone finds herself equally overwhelmed and overjoyed by her newborn son. Struggling to balance the demands of new motherhood, Rebecca leans on Priscilla, the family nanny, who brings much-needed order to the household even as she shakes Rebecca's perception of the world. As questions of race enter Rebecca's cloistered life for the first time, she has the opportunity to finally confront the blind spots of her own privilege.

Rebecca feels so profoundly connected to the woman who has taught her what it means to be a mother that when Priscilla dies unexpectedly in childbirth, it seems strangely natural for Rebecca to step forward to adopt the baby. But she is unprepared for what it means to be a white mother with a black son. As she soon learns, navigating motherhood will be a matter of learning how to raise two children whom she loves with equal ferocity, but whom the world is determined to treat differently.

With the same warmth and psychological acuity that defined his debut, Rumaan Alam has crafted a remarkable novel about the families we fight to build and those we fight to keep.

Rumaan Alam is the author of the novels Rich and Pretty, That Kind of Mother, and the instant New York Times bestseller Leave the World Behind. His writing has appeared in The New York Times, New York Magazine, The New Yorker, The New York Review of Books, Bookforum, and the New Republic, where he is a contributing editor. He studied writing at Oberlin College and lives in New York with his family.

3.5 out of 5 stars
3.5 out of 5
167 global ratings
How are ratings calculated?
To calculate the overall star rating and percentage breakdown by star, we don’t use a simple average. Instead, our system considers things like how recent a review is and if the reviewer bought the item on Amazon. It also analyses reviews to verify trustworthiness.

C. Peterson
1.0 out of 5 stars Weak central plot, lots of missed opportunities
Reviewed in the United States on 9 June 2018
Verified Purchase
I had really high hopes for this book, and I'm sorry to say there isn't much about it I thought was done well. The idea was great, a white family adopts a the black child of their now-deceased nanny, and had a lot of potential to say something really meaningful about race. However, all we really learn is that motherhood is a lot of work. I found the characters boring, their relationships shallow, the writing too bogged down in details, the dialogue inane and overly detailed (simple chit-chat conversations go on for pages and substantive conversations don't resolve anything), and the dealbreaker that any conflict is resolved literally by the start of the next chapter. Nothing builds. Any good plot development fizzles or is dropped entirely within a few pages, never to be brought up again.
Read more
57 people found this helpful
Report abuse

Denelle Bryant
1.0 out of 5 stars I will never get back the time I spent trying to convince myself this was a worthwhile read.
Reviewed in the United States on 27 June 2018
Verified Purchase
I purchased multiple copies of this book after hearing it be reviewed by critics on The Today Show. I bought copies for all the moms in my family and invited them all to a Mother’s Day book club gathering. Guess I should have read it for myself first. No one in my family got the point of this book. There was no climax. No resolution. Just a lot of arbitrary. As I was reading, I kept anticipating where the author was going, and when it was over, my anticipations were the most exciting parts. Just didn’t live up to the hype. I wouldn’t waste my time reading this one.
Read more
37 people found this helpful
Report abuse

Suze
1.0 out of 5 stars Hard Pass
Reviewed in the United States on 15 June 2018
Verified Purchase
I had such high hopes! Sadly, the writer got in the way of his own story telling. The unending prose became a quagmire that held character and plot line beneath the surface. I was hopeful each time the story ventured away from self-absorbed Rebecca and toward the substantial reality of race relations, but each time I was frustratingly disappointed. The writer was much more interested in Rebecca than I could bring myself to be. Hard pass.
Read more
19 people found this helpful
Report abuse

DawgFan NC
3.0 out of 5 stars Missing something
Reviewed in the United States on 14 August 2018
Verified Purchase
A very interesting premise where a white family adopts the black child of their nanny when she dies in childbirth. That set the stage for many important topics to be explored, especially in our current climate. Unfortunately this is where the novel fell short for me. Rebecca, the adoptive mother, is so self absorbed that she fails to hear anything Cheryl, the deceased nanny’s grown daughter, tries to tell her about raising an African American child. Her advice ranged from the simple how to take care of his dry skin to the life or death matters of driving while black. Instead of an honest dialogue Rebecca would make light of the conversations and retreat back to her own world. Because of the missed opportunities to really do something with the promising start, I was disappointed in the book. I wanted it to be great but came away with average.
Read more
10 people found this helpful
Report abuse

Sandra Waters customer
4.0 out of 5 stars Food For Thought
Reviewed in the United States on 27 June 2018
Verified Purchase
I wavered between rating this fine book a 4 or 5. The beginning began slowly. I know the author was trying to develop characters, so I was patient and then it took off. This story is about a reality of today. The black child adopted into today’s family. It is a well thought out story and certainly gives one food for thought. I really got into the story and felt I understood all the characters. I don’t think the ratings it has gotten are totally fair. People should examine any prejudices they might have and keep an open mind. I liked the ending. It will be interesting to see how his future writings develop.
Read more
13 people found this helpful
Report abuse
See all reviews
Back to top
Get to Know Us
Make Money with Us
Let Us Help You
And don't forget:
© 1996-2021, Amazon.com, Inc. or its affiliates