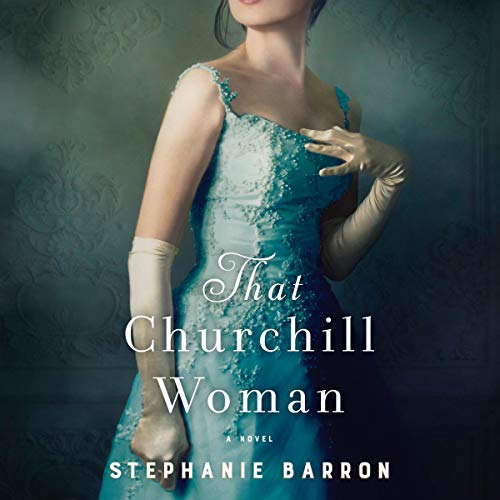 That Churchill Woman: A Novel

The Paris Wife meets PBS’s Victoria in this enthralling novel of the life and loves of one of history’s most remarkable women: Winston Churchill’s scandalous American mother, Jennie Jerome.

Wealthy, privileged, and fiercely independent New Yorker Jennie Jerome took Victorian England by storm when she landed on its shores. As Lady Randolph Churchill, she gave birth to a man who defined the 20th century: her son Winston. But Jennie - reared in the luxury of Gilded Age Newport and the Paris of the Second Empire - lived an outrageously modern life all her own, filled with controversy, passion, tragedy, and triumph.

When the 19-year-old beauty agrees to marry the son of a duke she has known only three days, she’s instantly swept up in a whirlwind of British politics and the breathless social climbing of the Marlborough House Set, the reckless men who surround Bertie, prince of Wales. Raised to think for herself and careless of English society rules, the new Lady Randolph Churchill quickly becomes a London sensation: adored by some, despised by others.

Artistically gifted and politically shrewd, she shapes her husband’s rise in Parliament and her young son’s difficult passage through boyhood. But as the family’s influence soars, scandals explode and tragedy befalls the Churchills. Jennie is inescapably drawn to the brilliant and seductive Count Charles Kinsky - diplomat, skilled horse racer, deeply passionate lover. Their affair only intensifies as Randolph Churchill’s sanity frays, and Jennie - a woman whose every move on the public stage is judged - must walk a tightrope between duty and desire. Forced to decide where her heart truly belongs, Jennie risks everything - even her son - and disrupts lives, including her own, on both sides of the Atlantic.

Breathing new life into Jennie’s legacy and the glittering world over which she reigned, That Churchill Woman paints a portrait of the difficult - and sometimes impossible - balance among love, freedom, and obligation, while capturing the spirit of an unforgettable woman, one who altered the course of history.

Praise for That Churchill Woman:

“The perfect confection of a novel.... We’re introduced to Jennie in all of her passion and keen intelligence and beauty. While she is surrounded by a cast of late-Victorian celebrities, including Bertie, Prince of Wales, it’s always Jennie who shines and takes the center stage she was born to.” (Melanie Benjamin, New York Times best-selling author of The Aviator’s Wife and The Swans of Fifth Avenue)

4.3 out of 5 stars
4.3 out of 5
501 global ratings
How are ratings calculated?
To calculate the overall star rating and percentage breakdown by star, we don’t use a simple average. Instead, our system considers things like how recent a review is and if the reviewer bought the item on Amazon. It also analyses reviews to verify trustworthiness.

banannafrog
5.0 out of 5 stars Great read
Reviewed in the United Kingdom on 20 May 2019
Verified Purchase
Great book easy reading loved it would recommend it
Read more
Report abuse

NLBHorton
3.0 out of 5 stars Barron's Steady Prose, but Formulaic
Reviewed in the United States on 12 March 2019
Verified Purchase
I really enjoy Stephanie Barron's historical fiction novels, but this manuscript fell flat for me. In part, I feel as if historic biopics are unfair to their protagonists, even though I realize that Jennie Jerome/Churchill is public domain at this point. The story's speculation, which is based on fact, about her life and marriage almost seems intrusive since she still has living relatives. (Not that this book, or American Duchess, or A Well-Behaved Woman will sway public opinion since generally, no one cares about these women/families much any more). I'd have enjoyedThat Churchill Woman more had Barron made it straight-up fiction about a fictional character, and I'd have bought it simply on the strength of Barron's other work.

As it is, although Barron's writing is as clear as ever, I didn't relate to any of the characters, most especially "that Churchill woman" herself. After That Churchill Woman, American Duchess and A Well-Behaved Woman, it's as if authors have discovered a formula: write about a privileged American woman who marries into wealth or aristocracy, throw in some (lurid) details about parties, clothes, marriage/s, and transgressions, then call it a novel.

I'm ready for this trend—and time-traveling, and bouncing back and forth between historic periods, and dystopia—to end, and for authors I enjoy to revert to their imagination and talent to create stories again.
Read more
30 people found this helpful
Report abuse

Dixie Reader
4.0 out of 5 stars Love Stephanie Barron; Love Lady Randy ...
Reviewed in the United States on 18 March 2019
Verified Purchase
I'm a major Churchill Buff. From the first ones rewarded with Blenheim, to Pamela Digby Churchill Harriman, the family has made waves on both sides of the Pond for over three hundred years. Winston, Jennie's son, gave the British Lion its roar, and for much of World War Two, that was all England had going for her.

This novel was based on some spectacular facts, but I never let facts get in the way of a good legend. Jennie Jerome Churchill Cornwallis-West was a legend.

I found this book entertaining as only Stephanie Barron can do. She captures "Voice" -- whether it is writing in Jane Austen's voice in her Jane Austen Mysteries, or here. She tells a fabulous story.

Now to buy one of her books I've not read: Jack 1939.
Read more
17 people found this helpful
Report abuse
See all reviews
Back to top
Get to Know Us
Make Money with Us
Let Us Help You
And don't forget:
© 1996-2021, Amazon.com, Inc. or its affiliates