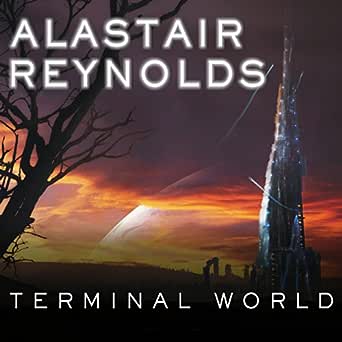 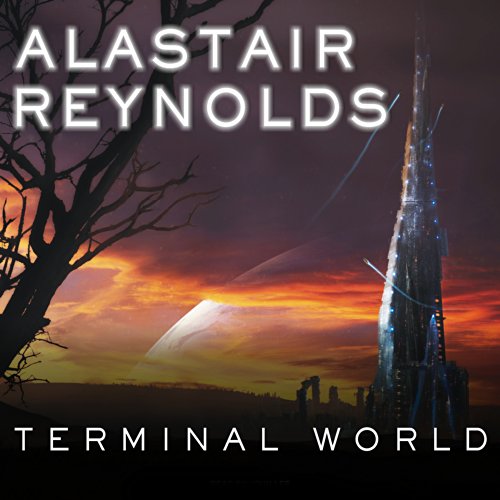 3.8 out of 5 stars
3.8 out of 5
164 global ratings
How are ratings calculated?
To calculate the overall star rating and percentage breakdown by star, we don’t use a simple average. Instead, our system considers things like how recent a review is and if the reviewer bought the item on Amazon. It also analyses reviews to verify trustworthiness.

John M. Ford
TOP 500 REVIEWER
4.0 out of 5 stars Three Paths For Mister Quillon
Reviewed in Australia on 23 September 2014
Quillon is one of thirty million people who inhabit the city of Spearpoint, a mountain-sized spike of unknown black material that thrusts upward from the planet's surface to the thinning upper reaches of its atmosphere. The City is divided vertically into Zones with different physical laws that allow different levels of working technology. Above Neon Heights, where Quillon works as a forensic pathologist, are Circuit City, the Cybertowns, and the Celestial Heights. Little is said of Circuit City, but the cyborgs and post-human "angels" of the celestial levels cannot descend to Neon Heights without fatal degradation of their bodies. When Quillon must flee Spearpoint to save his life, he descends through Steamville and Horsetown into the wild lands beyond.

Three journeys take place as the story unfolds. The first is the physical journey Quillon makes, joined by his various fellow travelers. This journey by itself is a fairly good adventure tale. The second is a developmental journey as Quillon is changed by those he encounters. The third is an accreted understanding of the geography, physics, and history of the world that Reynolds has cast us into. Quillon's traveling companions, Meroka, Kalis and Nimcha, have their own secrets, which they haltingly reveal to one another.

This is a good story with fascinating characters and cultures. Interesting individuals include an angel surgically altered to appear human, a steampunk cyborg, and a tectomancer with zone-changing powers. Cleverly-conceived cultures range from the people who operate massive, low-tech semaphore towers to the Skullboy pirates and airship crews of SWARM who battle for control of the skies. It's a little bit steampunk, a little bit nontraditional space opera, and just a very little bit post-apocalyptic ethnography. It's an odd mix, but think jambalaya, not jumble. The only flaw I found was a slight tendency of some characters to make long, overly-appreciative speeches to each other.

Recommended as solid science fiction for newbies and hard cases alike. Further recommended as a high quality audio book. Narrator John Lee keeps an appropriate pace and differentiates the characters' voices skillfully. It nags at me that his female Meroka sounds like Michael Caine, but this is only a minor distraction.

Amazon Customer
5.0 out of 5 stars Doctor Quillon in an Exciting Adventure with the Sky Pirates!
Reviewed in the United Kingdom on 28 August 2016
Verified Purchase
An advanced humanoid exiled from his own kind adopts a medical honorific and goes on the run with a feisty female companion through a landscape adapted from familiar science fiction sources.

I really enjoyed "Terminal World". It's a pure adventure story, well-written, and apart from one longueur in the second half it rattles along at a steady pace. This strength is also one of its weaknesses. The plot is on fixed rails and the experience is all about the journey and not the destination. As several people have already indicated, there's not exactly a cliffhanger but there's not much of an ending either.

The central MacGuffin is world divided into zones in which some technology works, and some doesn't. Don't search for a detailed or rational explanation. It just has to be like that for the story to work.

The zones turn the Terminal World into a mash-up of well-established adventure sf tropes and memes. We begin in a noir-ish, neon-lit, "Brazil"-like retro future. There's a "Cowboys and Aliens" section where the most advanced technologies are horses and single-shot rifles. A tribe of Mad Max post-apocalypse crazies is dropped in as a running antagonist, alongside some Borg-like transformer-zombies. Just over half the action is set on a hybrid dieselpunk-steampunk armada of petrol-driven zeppelins. Pure clockwork is celebrated with a diagnostic function for wristwatches, and there's a guest appearance from Terry Pratchett's "clacks".

There's not much complexity among the characters, but I don't think the story pretends to be anything that might need it. Our protagonists are a fairly uniform group of honourable paragons. The couple of out-and-out villains exist entirely to provide additional tension in the central longueur and the final climax, and only one has anything like a second dimension to their character.

The story neatly honours and at the same time undermines the tropes of Young Adult stories. The most identifiable teen is deliberately the sweariest character in the book. A child with special powers and a unique destiny appears relatively early, then spends most of the book in an assortment of cupboards. In a very neat in-joke the child and the teen read in-Universe steampunk adventures, which they both dismiss as complete rubbish.

This might make the book seem a bit lacklustre, which it isn't. I've watched and read some truly dreadful stuff this year, including work from writers I (used to) admire. "Terminal World" stands head and shoulders above it all.

Having also fallen out profoundly with a much-loved sf franchise this year I thought I saw a connection between its hero in the glory days and the notional hero of "Terminal World". Past a certain point most of the other characters address Quillon solely by the Medical Honorific, and his feisty companion quickly adopts an affectionately derisory alternative.

D J Sharpe
3.0 out of 5 stars A bit of a disappointment
Reviewed in the United Kingdom on 17 December 2018
Verified Purchase
Too drawn out, characters that didn't behave consistently or in some cases believably, and a very thin plot more akin to an adventure game. When you read books such as these you have to suspend belief in the underpinning technology and physics, which is fine but I got the impression that consequences had not been wholly thought through. I stuck at it for 2/3 of the book and then skip read the rest as I was getting bored (a lot of words saying very little). And as for the ending.... what ending?

The story started OK but, in my view lost its way once the main characters ended up in the Swarm.
Read more
Report abuse

Anonymous Coward
4.0 out of 5 stars Left me high and dry
Reviewed in the United Kingdom on 13 October 2012
Verified Purchase
I actually enjoyed this book right up until the end where it just sort of stopped. I had guessed that it might, because the very nature of the characters and the setting meant that there could be no meaningful "eureka" conclusion and explanation, which I know is often a good plot device but in this case just left me feeling annoyed.

The world has gone wrong because an important piece of transport technology (stargate style? noone knows) was partly destroyed and/ or interfered with by aliens/ an alien intelligence? which has created weird zones that have slight but importantly different physical constants.

A solution to the problem is guessed at in the form of a child that is capable of controlling the misbehaving machinery and the story revolves around getting here back to the heart of the problem.

They get her there (via numerous trials & tribulations) and then it ends. The story was fine but I just felt it needed more at the end.

A. J. Sudworth
5.0 out of 5 stars Got better as it went along
Reviewed in the United Kingdom on 15 January 2012
Verified Purchase
This story is set on an Earth far in the future where an initially unexplained problem has caused sections of the world to have to exist at different technology levels - and this is most vividly seen in a city set in a spire
What it does show that regardless of the story you need a hero and in this sgtory you have a fallen angel , who has rebelled against a plan to exploit the differences between the high and low tech areas
Its interesting to see a reference to the Chinese and a technology that evidently went wrong but that is a back story initially until it is brought out in the last section of the book to explain why the world is as it is - sorry, don't want to give away too much here ..
I'd left this a long time to read because I enjoyed House of Suns so much - and this is a big contrast - no so much space opera as armageddon story
Its well told with some great characters and I felt it fair ripped along - it just felt different to previous stories
Read more
Report abuse

geodoc
4.0 out of 5 stars A successful experiment
Reviewed in the United Kingdom on 6 September 2012
Verified Purchase
Alistair Reynolds is one of the best- if not the best- British SF writers on the scene today. I find it strange that he is best known for his Revelation Space novels, which are entertaining but somewhat by-the-numbers space opera. It's in his standalone novels, such as Terminal World, where he really displays his imaginative power. If the results are a little uneven, particularly when it comes to characterisation and dialogue, it's easily forgiven because his landscapes are enchanting, the storytelling is gripping, and the underlying concepts suitably mindblowing (and in this novel, all the better for being hidden behind the scenes-- no big infodumps here, yet I wasn't left in any doubt of the plausibility of the ideas... I suspect there's a hard SF core wrapped in the pleasing steampunk, story and scenery-driven shell).

The book's got technology, mega-architecture, stunning vistas, posthumans, steam powered human cyborgs, airships, airship battles, carnivorous brain eating dog-like cyborgs, references to 'cosmic funiculars', and much else besides. What's not to like?

It's also got a great protagonist who goes from isolated pathologist (that's -ist) loner trying his best to hide his true self from those around him, to all-round respected-and-liked-despite-his-unusual-background battlefield medic and good guy. Yes, the flip-flopping attitudes, actions and dialogue of some of the characters sometimes lack plausibility. I wish they had been given more space to develop in their own way, rather than being forced along by the demands of a sometimes hurried narrative (there would easily have been enough material to fill two novels here, and more time spent over plotting and character development would have been time well spent).

But unlike some reviewers on here, I found the story as a whole gripping and ultimately satisfying, the concepts clever and fascinating, the principal characters engaging, and the settings blisteringly imaginative and well-rendered.

More like this please, Mr Reynolds.
Read more
Report abuse
See all reviews
Get FREE delivery with Amazon Prime
Prime members enjoy FREE Delivery and exclusive access to movies, TV shows, music, Kindle e-books, Twitch Prime, and more.
> Get Started
Back to top
Get to Know Us
Make Money with Us
Let Us Help You
And don't forget:
© 1996-2020, Amazon.com, Inc. or its affiliates