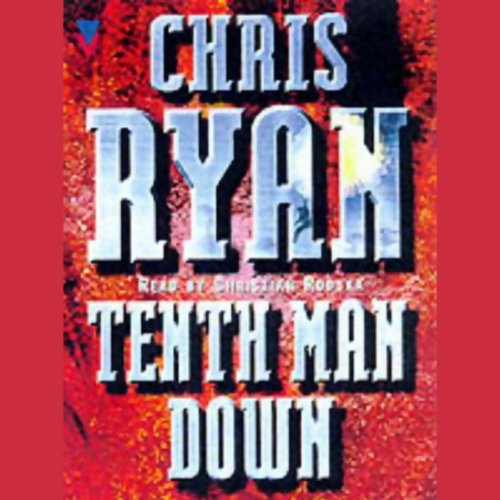 Chris Ryan (Author), Christian Rodska (Narrator), Random House AudioBooks (Publisher) & 0 more
4.4 out of 5 stars 155 ratings
See all formats and editions
Sorry, there was a problem loading this page. Try again.
When an SAS team is sent to train government troops in Kamanga, a poverty-stricken and war-torn republic in the dark heart of southern Africa, Geordie Sharp is caught up in the most dangerous and difficult assignment of his career. At the outset of the mission a juju, or witch doctor, predicts that 10 whites are going to die, and as the prediction starts to come true, one by one down they go.

In the south of Kamanga rebel forces have seized the diamond mines which produce the bulk of the country's wealth. The aim of the crack government unit is to recover these lucrative assets, with Geordie Sharp and his squad providing much-needed back-up. When the SAS men see that the rebels are boosted by ex-US Navy SEALs mercenaries, they begin to sense a hidden agenda. Before they can discover what it is, Sharp and two others fall into rebel hands. His comrade Whinger dies a hideous death, but Sharp manages to escape. At last Sharp stumbles onto the secret which is drawing such strong international interest, only to realise that he himself may have been exposed to a lethal dose of radiation in the process. Is he the tenth and last of the juju's victims?

Read more
©1999 Chris Ryan (P)1999 Random House Audiobooks
Learn more about membership
By completing your purchase, you agree to Audible’s Conditions Of Use and Privacy Notice.
Sold and delivered by Audible, an Amazon company
Share

4.4 out of 5 stars
4.4 out of 5
155 global ratings
How are ratings calculated?
To calculate the overall star rating and percentage breakdown by star, we don’t use a simple average. Instead, our system considers things like how recent a review is and if the reviewer bought the item on Amazon. It also analyses reviews to verify trustworthiness.

Kindle Customer
5.0 out of 5 stars Liked it....
Reviewed in Australia on 15 April 2021
I'm partial because I love a story with lots of gun fights especially in war zones. I mean if it's not for you, then you probably won't enjoy it. I also found it humorous; made me chuckle a couple of times. Would recommend to anyone who likes shooty shooty bang bang stories.
Read more
Helpful
Report abuse
See all reviews

S azmi
4.0 out of 5 stars An African Adventure
Reviewed in the United Kingdom on 22 January 2021
Verified Purchase
I guess with fiction, you have to accept the fiction but made-up African countries and the like is a little over-done in the history of conflict tales...i think anyway. Nevertheless 4 stars because it was a good yarn and eventually quite fun even if it took me a while to get into it. Worth a read, but it was not a “cant put it down”er
Read more
Report abuse

les sharrock
3.0 out of 5 stars Don’t bother
Reviewed in the United Kingdom on 6 February 2020
Verified Purchase
Not the best Chris Ryan book that I have read,I was tempted to put it down but I kept on until the end,it was ok but I would not recommend it
Read more
Report abuse

Kindle Customer
3.0 out of 5 stars Eventual action
Reviewed in the United Kingdom on 8 July 2017
Verified Purchase
Normally a writer of fast paced thrillers Chris Ryan has produced a book which is rather slow to get going. So much so that I put it down for some time and did other things. However once it gets going it becomes a good read which you don't want to stop reading. Would recommend it all the same.
Read more
Report abuse

Amazon Customer
5.0 out of 5 stars Just brilliant
Reviewed in the United Kingdom on 13 July 2019
Verified Purchase
I'm just never sure how much is fiction or how much is based loosely on actual fact. I love the story telling, I can read these books time and time again. 3rd time round for this one, first time on the Kindle
Read more
Report abuse

TOM G
5.0 out of 5 stars Chris Ryan does it again.
Reviewed in the United Kingdom on 28 January 2020
Verified Purchase
As usual a good read from a good writer of adventure stories.
Read more
Report abuse
See all reviews
Back to top
Get to Know Us
Make Money with Us
Let Us Help You
And don't forget:
© 1996-2021, Amazon.com, Inc. or its affiliates