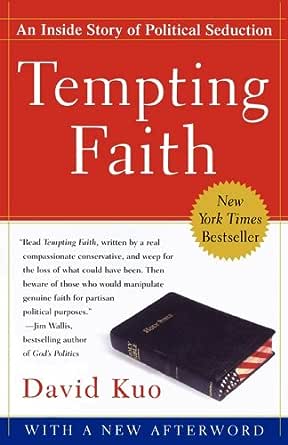 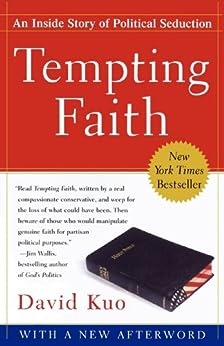 Tempting Faith: An Inside Story of Political Seduction Kindle Edition

Read Tempting Faith, written by a real compassionate conservative, and weep for the loss of what could have been. Then beware of those who would manipulate genuine faith for partisan political purposes."

"The best kind of sermon, the most revealing and meaningful kind of testimony. At [Kuo's] call for action, you want to give [him] a loud 'amen.'"

"Tempting Faith is one of those rare Washington books that is worth reading -- clearly written, disarmingly honest, thoughtfully introspective, and unusually substantive.... A refreshingly honest account of how politics can seduce the best intentioned and the most naïve."

-- The American Conservative --This text refers to an alternate kindle_edition edition.

David Kuo served as Special Assistant to the President under George W. Bush from 2001 to 2003. He has worked for numerous conservative leaders, including John Ashcroft, William Bennett, Jack Kemp, Bob Dole, and Ralph Reed. He is the author of the Good Morning America Book Club selection Dot.Bomb: My Days and Nights at an Internet Goliath. He currently serves as the Washington editor of the Beliefnet Web site. --This text refers to an alternate kindle_edition edition.

Joseph Palen
4.0 out of 5 stars A mind expander - for me
Reviewed in the United States on 27 November 2006
Verified Purchase
As a Republican, turned Democrat, turned Republican, turned "Liberal" Democrat, who was rescued by and began following Jesus at age 42, I bought this book to gloat(shame on me) about the exposed hypocrisy of the right wing fundamentalists and to find more detail of how they were used by the right wing Republicans to further an agenda promoting American expansion into Oil Country. What I found was much different. I found a serious Christian who had worked hard to serve his Lord by serving other serious, if naive, Christians by helping to get them in office and into a position to change the American social system. The problem he discovered was that it could not be done (at this time) by politics; the best intentions to serve the poor and improve society could not change the already built in need for funds for military and entitlements nor compete with the promised tax cuts needed to get elected in the first place. I came away however, not only with a great respect for the effort made, but also a little compassionate understanding of Bush and even of Karl Rove (replacing disgust, bordering on hate(shame on me again)). No one has all the answers. One of the most helpful parts for me was the Afterword, where Kuo (who is in a remission with incurable brain cancer, and thereby is in no position to take things lightly)suggests that Christians (true followers of Jesus) have a "fast" from politics and try to take it to a higher plain, recognizing that God is in control, and try to see what He wants us to do with our time - probably accomplishing our social agenda by loving others and Spiritual assistance rather than by politics.

Rating-wise, I would have given Kuo, whom I greatly now admire, a 5. However, although he generaly writes very well, - his profession- there were sections where he lost me and I missed the point - most likely my fault, but anyway -1 star. Well worth reading for anyone interested in the relationship of religion, social welfare, and politics in today's world.

Mama Aloha
5.0 out of 5 stars informative, easy read
Reviewed in the United States on 12 May 2007
Verified Purchase
David Kuo is a good read for those who are not high tech readers, as I am not. I appreciated his Christian perspective, as it was honest, compassionate and truthful from his point of reference. It was interesting and disheartening to learn how people of good intention give up their integrity to get votes for themselves or their party. It was inspirational to me, though, because I felt connected to people I will never meet and are so "high up" in the government, based on our similar human desire to help those in need. I am not a right wing republican, but I was able to see our common god-spirit. David, you are a gifted writer and an honorable man. Thank you for writing this book.
Read more
5 people found this helpful
Report abuse

BDT
5.0 out of 5 stars Pres. Bush...smarter than we thought...
Reviewed in the United States on 7 March 2007
Verified Purchase
It seems George W. may be smarter than we thought. This book does an excellent job highlighting how Evangelicals (among others) were strung along with promises of Faith Based Initiatives only to be let down time and again. President Bush kept religious leaders happy and was able to court their support while actually not doing anything, not one single thing. Remarkable. I was always against the Faith Based stuff until I read Mr. Kuo's book. If the plans Mr. Kuo and others put forward were actually treated seriously or even paid attention to they could have had positive, far-reaching effects.

This book is a great insider's tale / autobiography. I view President Bush in a new light now, positive and negative.

Bugs
5.0 out of 5 stars Review by a Green Liberal Leaning Centrist
Reviewed in the United States on 31 October 2006
Verified Purchase
Reviewer disclosure:

A review by a who/what? Five stars? Yes, and an explanation is in order. I don't ordinarily read, much less, review current conservative authors. Like everyone else, I see the daily barrage of political scandal, deceit, hypocrisy, ad infinitum- ad nauseam on the daily news and the patterns are clear: the faith-based amongst us are constantly being prevailed upon to support whatever political schemes and candidates the GOP is promoting. The platitudes and biblical one-liners/phrases are tossed around like candy to attract favor in the single-minded effort to get that precious vote. So blather the "wolves in sheep's clothing", me thinks and gag me with spoon.

So how could so many good God-loving, faith-based, well intentioned people be taken-in in light of these obvious blatant scams, nonsense and unfulfilled promises? What's the psychology here? Are the faith-based blind, naive? You know: lights on, but nobody is home. I really wanted to know just exactly what goes on in the noggin of the average faith-based that would have them routinely casting their vote for the GOP/Corporate ticket.

So when I first heard that David Kuo's book "Temping Faith" was reportedly suggesting that the Bush admin and the GOP in general was taking advantage of the faith-based for their votes while not following through with promises, my interest was piqued. This "revelation", while an obvious no-brainer to anyone even partly paying attention to politics, is potentially huge. And to boot, this from a Bush admin insider! Hmmm.

My first reaction was Hallelujah! A good standing member of the flock finally wakes up and gets it! Considering what the conservative vote has inadvertently wrought on this country and the world: the GOP blessed de-regulating of polluting/predator corporations, war, poverty, a trashed economy (except for the rich and Wall Street), denial of global warming- again, ad infinitum- ad nauseam- well, I just had to find out what David Kuo has to say.

David Kuo`s "Tempting Faith" is for the most part, autobiographical: his upbringing, coming to the Christian faith, family, education, trials and tribulations, aspirations, politics, etc.

I found his writing style flowing, informing and at times, heart wrenching- he has been through some rough rows in life- the kind that would test anyone's faith. Overall, I was left with the impression that he is candid, honest, decent and sincere, albeit, somewhat naive or at least overly trusting. Although many of his political views differ from mine, he seems like the kind of person who could easily take part in a civil, non-confrontational political debate.

His political "insider" experiences include working for Ted Kennedy, being a policy advisor to John Ashcroft, speechwriter for amongst others, Ralf Reed, Pat Robertson, and Bob Dole, et al. Kuo eventually became second-in-command in the Bush admin's Faith-Based and Community Initiatives committee.

It was in this role that he was exposed to the cynical, back stabbing treatment that pervaded in the White House towards the Evangelical Christian leaders who were looking to the Bush admin to fulfill election promises in exchange for encouraging their flocks to vote republican, yet getting almost nothing but derision for thanks- the vote was all that they were interested in.

I was amazed to learn that Kuo still holds George W. Bush in fairly high regard and this is due to his opinion that the shortcomings and betrayals of the Bush admin are mostly with the advisors such as Karl Rove, et al. Naive? I should think so. To suggest that Bush is not aware of what's going on in that regard is hard to swallow, but who's to argue that point with such a nice, decent guy like Kuo? One gets the feeling he actually believes this.

Kuo's bottom line message in this autobiography/political expose' is that American politics is in serious need of a cleansing- gee, ya think? Kuo's line: "The politically untainted can help wash those of us grown dirty with the filth of politics." and that Christians need to take a "temporary step back from politics" for a "...reexamination of political involvement."-- leaves one with a bad taste if they subscribe to the notion of separation of church and state like our wise forefathers tried to carve in stone for us.

This book is a sobering read for those of faith, the secular and everybody in between- one might not agree with Kuo's politics, but all will surely agree on his honesty and courage to speak out, especially about how the GOP has been taking the faith-based for a major ride! The index is extensive and allows for good reference. Well done David Kuo, 5 stars!
Read more
27 people found this helpful
Report abuse

Kofi Boateng
4.0 out of 5 stars Pleased with his assertions.
Reviewed in the United States on 16 January 2007
Verified Purchase
Pleased to have read this book. I guess that the election results indicated that America heard some of the issues raised in this book and agreed. As an evangelical Christian I have always been wary of leaders (be it Christian or not) who are made to appear as infallible. The typical evangelical christian crowd appeared to have been hynotized by the idea of a pastor in chief, probably cheered on by myriads of pastors and ministry leaders who so desparately wanted some sanity in politics. I hope that evangelical christians find their voice again but then I hope it is actually the voice that comes from God.
Read more
5 people found this helpful
Report abuse
See all reviews
Get FREE delivery with Amazon Prime
Prime members enjoy FREE Delivery and exclusive access to movies, TV shows, music, Kindle e-books, Twitch Prime, and more.
> Get Started
Back to top
Get to Know Us
Make Money with Us
Let Us Help You
And don't forget:
© 1996-2020, Amazon.com, Inc. or its affiliates