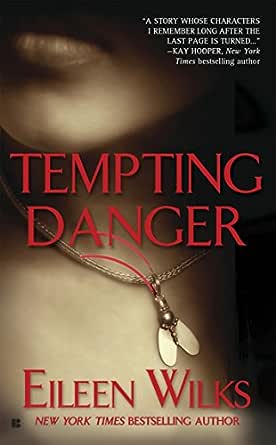 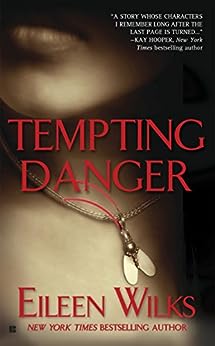 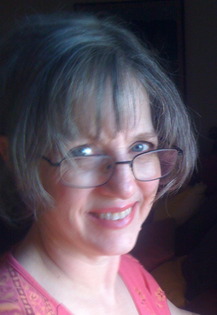 Eileen Wilks is a national bestselling author and a three-time RITA Award finalist, and has been nominated for a Career Achievement Award by Romantic Times. --This text refers to an alternate kindle_edition edition.

4.4 out of 5 stars
4.4 out of 5
131 global ratings
How are ratings calculated?
To calculate the overall star rating and percentage breakdown by star, we don’t use a simple average. Instead, our system considers things like how recent a review is and if the reviewer bought the item on Amazon. It also analyses reviews to verify trustworthiness.

Chrissy’s Book Shelf
4.0 out of 5 stars Great Start To The Series
Reviewed in the United Kingdom on 22 March 2020
Verified Purchase
I first read this book years ago and was reminded of the series by a post I read of Facebook. I decided to give the series a re-read, and realised that I’d never reviewed the books, because when I first read them I didn’t leave reviews. I’m righting that omission now.

This book is an Urban Fantasy/Paranormal Romance hybrid. In my mind Paranormal Romance books focus solely on the romance aspect of things, whilst Urban Fantasy is much more plot and action orientated. Whilst there is a hefty dose of romance in this book, there is also a great deal of plot, which is a fine line to walk. I believe Eileen Wilks succeeded in walking that line.

Lily Yu is a homicide detective with San Diego Police Department. She’s only 28 and is proud of achieving that goal. She is also a Sensitive, someone who can sense magic and magical beings. In this reality supernatural creatures are acknowledged but people are prejudiced against them and they only recently got some rights to be treated as citizens but werewolves or Lupi as they are called can still be killed when they are wolf form.

Lily has been called to a murder and follows the leads that send her to Rule, a prince of the Nokolai pack of Lupi. There is an instant connection, but he is the suspect in the murder.

Lily has to walk a tightrope between what is right and procedure within her department and the unspoken rules of the brotherhood of cops. Her feelings for Rule complicate matters

All the characters in this book are interesting, in particular Lily’s grandmother. She’s fascinating, as is her relationship with Lily. Lily is a complex character disguised as a straight forward one. With each chapter we peel back another layer of her personality and see her more clearly. We learn less about Rule in this book, but he’s still a very interesting and enigmatic character who loves his people and his family.

This book ends with a HFN, but leaves many questions unanswered and draws the reader on into discovering how the problems are solved.

I’m so glad I re-read this book, I can’t wait to start on the next in the series.

Amazon Customer
5.0 out of 5 stars One of my favourite series!
Reviewed in the United Kingdom on 24 September 2012
Verified Purchase
I have to admit, I write this having read the entire World of the Lupi series and fully admit to being a complete fan of Wilk's ingenious series. This first book though is the gem that started the obsession off though. I love Lily as the protagonist. She has a fantastic level head on her shoulders and isn't prone to freaking out like you would expect from some characters. Rule, apart from his odd name, is an amazing main man who I wish was real! I particularly like the mythology represented in this, and the resulting series. It is an urban fantasy set in the future, where magic is accepted, so along Ilona Andrews lines. Only unlike the Kate Daniel's series, this is a world where humans are still trying to come to terms with the magic and the new creatures that go bump in the night, and so caution is in the wind. Rule is the 'prince' of the Nokolai clan, so when he is considered a suspect in a murder, Lily Yu has to engage caution when proceeding. Lily herself is an exceptionally intriguing character. Her ethnicity, Chinese, is a point in the series, but instead of it being a point hammered home, it just adds to the charm of her and half the time you even forget as it's not too important. The story line just sucks you into a world which is richly built and fleshed out, the plot line is intense and intriguing and just invites you to continue reading. It was such a shame to have finished it, I immediately began downloading the second book in the airport in Rome because I was so desperate to read the subsequent books!
Read more
One person found this helpful
Report abuse

Sharon
3.0 out of 5 stars Hey Yu!!
Reviewed in the United Kingdom on 17 January 2011
Verified Purchase
This is the second outing in the series but the first full length novel, the protagonists first appeared in the short story 'Under The Light of the Moon' in the anthology  Lover Beware , published in 2003.
Magic is breaking through, Banshee's Gryphons & even an elder Fire Elemental has been sighted, magical species that have not been common for 400 years. Set in San Diego, 28 year old Homicide Police Detective Lily Yu is given a high profile Were attack involving the death of a human. She's your typical tough, brusque, sarcastic, ball buster, who follows the rules & specifically joined to keep the streets clear of murder & evil.A closet 'sensitive' she can get a 'feel' if magics have been used, or if they are lupi, gnome etc.
Rule second in line to take over the local pack very quickly gets involved, even though he is a suspect, magic & fate takes over & makes an extremely complicated situation worse.
E.W paints a very realistic, politic, magical world & they appear to meld in seamlessly.
I loved the characters of the indomitable Grandmother, Gnome, & Precog, her characters are not boring, but engaging & entertaining.
I decided to read this with an open mind & I went along quite well until the latter third of the book, it got tied up in police procedurial, plans, meshed with magic that didn't quite do it for me & got a bit repetitive, also the ending seemed rushed after such a huge build up.
Saying all this still a solid novel, with a tightly knitted magical infrastructure that is unique in it's own way.
Next book is called  Mortal Danger (Berkley Sensation) , I might be just tempted to read the next one.....
Read more
2 people found this helpful
Report abuse

nlondonhousewife
3.0 out of 5 stars ok, not earth shattering
Reviewed in the United Kingdom on 29 March 2019
Verified Purchase
Wanted to love this, but just missed something. Easy read
Read more
Report abuse