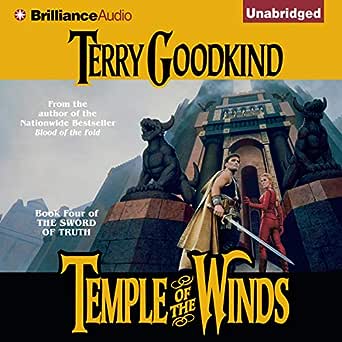 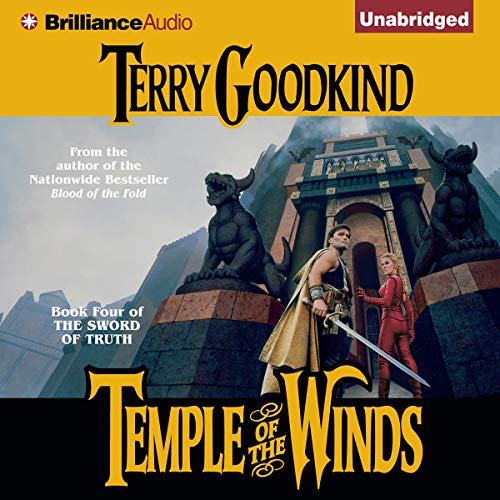 Temple of the Winds: Sword of Truth, Book 4

joy
5.0 out of 5 stars Five Stars
Reviewed in Australia on 16 December 2015
Verified Purchase
Have really enjoyed all the books in this series😊
Read more
Helpful
Comment Report abuse
See all reviews from Australia

Jim
2.0 out of 5 stars Given it a good go and it's time to find something else that's good
Reviewed in the United Kingdom on 6 September 2018
Verified Purchase
Got a bit of a like/hate relationship with this series. I like the story and events can be quite grim and detailed which I find most authors avoid. It's not at Warhammer levels. Unfortunately I find the writing style grating and Evey now and again I just want to chuck it in the bin. Evey book recaps previous books in the series excessively and I find myself skipping paragraphs which I have never done with any previous book just in case I miss something. characters have unbelievably detailed conversations at the oddest times like in moments of peril or when making/justifying decisions. For some reason this really gets to me. How people can compare this to the wheel of time or tolkein I do not know. There's lots of words and info but then so has an encyclopaedia
Read more
One person found this helpful
Helpful
Sending feedback...
Thank you for your feedback.
Sorry, we failed to record your vote. Please try again
Report abuse

Ms Maggi Miller
5.0 out of 5 stars the struggle goes on
Reviewed in the United Kingdom on 14 July 2010
Verified Purchase
This is the fourth book in the "Sword of Truth" series and is yet again an incredible read. I got interested in the "Sword of Truth" books after watching "Legend of the Seeker" on tv. Being a Tolkien fan and, realising that this was a fantasy in a similar vane, I bought the first book "Wizards First Rule" Since then I've been well and truly hooked. Whilst I think nothing can top "Lord of the Rings" this comes a very close second.

Richard (the seeker and now Lord Rahl) and his beloved Mother Confessor Kahlan are again fighting the evils that threatens the Midlands. Now a new threat arises in the form of Jagang, a tyrant who wants to kill Richard and take over the D'haran empire which Richard now leads. Using his cohorts, the sisters of the dark and his ability to enter peoples minds whilst they are asleep, Jagang, known as the Dream Walker, releases the plague into the Midlands.

Richard and Kahlan struggle to stop this disease but it costs them dearly and their faith and love in each other is pushed to the limits. Richard is only just begining to understand his powers as a War Wizard and without his grandfather Zed, a Wizard of the first order, to help him he learns that he must find and enter The Temple of the Winds to put back "that which has been taken" if he wants to stop the plague from destroying his empire. To enter the Temple he and Kahlan have to make the ultimate sacrifice.

I wont spoil the story by revealing what they must do and the outcome of their devotion to each other and to their duty. Suffice to say that yet again I could not put this book down and am now on the fifth book with numbers 6,7 and 8 waiting in the wings.

Whilst this series of books, at 11 volumes in total, seems incredibly long, believe me it is worth every minute that you spend reading it. I lent the first book to a friend who in turn lent it to her sister. Now they are both badgering me to read quicker so that they can borrow the follow-on books.

Loose yourselves in the Midlands and D'hara, cheer on Richard and Kahlan, I assure you that you will not be disappointed.

DENTON P. WALTER
5.0 out of 5 stars A good read for all fantasy fans
Reviewed in the United Kingdom on 21 February 2013
Verified Purchase
I enjoy Terry Goodkind's work, though I know there are a lot who don't. I see nothing wrong with his writing, and he has created some very interesting characters along the way. The Mord-Sith for example, surely among the finest fantasy creations to be found in any book. Their blend of evil combined with loyal, devoted service, all joining the Seeker of Truth as soon as he becomes the new 'good' Lord Rahl (which they did back in the 2nd volume of the series), going on to be his finest protectors as well as close friends, is a brilliant format I think. I really like the idea of these women who have given such superb but totally evil service to the former ruler who, on finding that Richard treats them with kindness, all go over to serve him and follow the path of good. Cara, the leading Mord-Sith, is a wonderful creation, her constant caustic comments to her master being really amusing. Other interesting characters pop up in this volume as well, but you'll just have to read it to find out. A large book pagewise, but I think an very interesting read. I would recommend it.
Read more
One person found this helpful
Helpful
Sending feedback...
Thank you for your feedback.
Sorry, we failed to record your vote. Please try again
Report abuse

AML
5.0 out of 5 stars Thoroughly enjoyed reading this
Reviewed in the United Kingdom on 12 February 2019
Verified Purchase
I don't often write reviews but feel I have to with this series. I have thoroughly enjoyed reading these books and love the characters and the lands they created. Apart from a little bit of repetition of certain points they are a really good read and I could not wait to read the next book in the series each time I finished one
Read more
Helpful
Sending feedback...
Thank you for your feedback.
Sorry, we failed to record your vote. Please try again
Report abuse

KCS54
5.0 out of 5 stars Fantastic sequel
Reviewed in the United Kingdom on 5 October 2016
Verified Purchase
As always Terry never fails to deliver. This latest in the Sword of Truth volume of books is as hood as the last 3. The mixture of stories blend together very well and the narration is exemplary. Can not Wait to read the nest book.
Read more
Helpful
Sending feedback...
Thank you for your feedback.
Sorry, we failed to record your vote. Please try again
Report abuse
Load more international reviews

Daniel
4.0 out of 5 stars Good Book
Reviewed in the United Kingdom on 24 November 2016
Verified Purchase
Like the others in the series so far, it's a solid read with great characters who are likeable. I can't wait to start the next one.
Read more
Helpful
Sending feedback...
Thank you for your feedback.
Sorry, we failed to record your vote. Please try again
Report abuse

Amazoncustomer
5.0 out of 5 stars Great book
Reviewed in the United Kingdom on 23 October 2019
Verified Purchase
Full of twists
Read more
Helpful
Sending feedback...
Thank you for your feedback.
Sorry, we failed to record your vote. Please try again
Report abuse

phoenixbots
5.0 out of 5 stars Five Stars
Reviewed in the United Kingdom on 15 October 2017
Verified Purchase
Gives an understanding of the ability of one to sacrifice through choice for others
Read more
Helpful
Sending feedback...
Thank you for your feedback.
Sorry, we failed to record your vote. Please try again
Report abuse

Mrs D H Vint
5.0 out of 5 stars Five Stars
Reviewed in the United Kingdom on 27 July 2016
Verified Purchase
Fantastic storey, although do read the series in order.
Read more
Helpful
Sending feedback...
Thank you for your feedback.
Sorry, we failed to record your vote. Please try again
Report abuse

DDM
4.0 out of 5 stars Four Stars
Reviewed in the United Kingdom on 27 August 2017
Verified Purchase
I liked it
Read more
Helpful
Sending feedback...
Thank you for your feedback.
Sorry, we failed to record your vote. Please try again
Report abuse