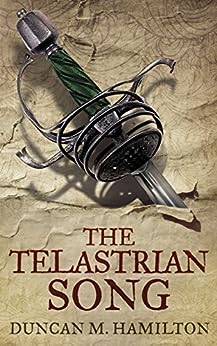 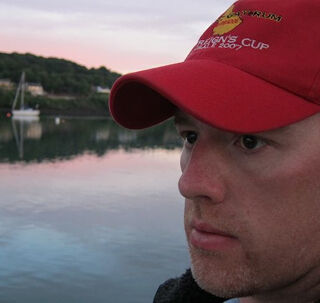 The Telastrian Song (Society of the Sword Book 3) Kindle Edition

4.4 out of 5 stars
4.4 out of 5
109 global ratings
How are ratings calculated?
To calculate the overall star rating and percentage breakdown by star, we don’t use a simple average. Instead, our system considers things like how recent a review is and if the reviewer bought the item on Amazon. It also analyses reviews to verify trustworthiness.

Pigeon
3.0 out of 5 stars Appreciated
Reviewed in Australia on 22 March 2020
Verified Purchase
Well, I finished. But it was like taking the slow boat to China. I enjoyed the characters but the plot didn’t really develop and grow, reaching its crescendo at the climax. It just seemed to meander, from point A to point Z. Onward and upward.
Read more
Helpful
Report abuse

Paul Lynch
4.0 out of 5 stars Enjoyed the trilogy
Reviewed in the United Kingdom on 2 September 2014
Verified Purchase
I read the first two books when they were published, and have just finished this one. I'll confess to not clearly remembering everything from before, as I was reading another fantasy trilogies with a remarkably similar background at the same time (the rather excellent Raven's Shadow by Anthony Ryan). However, I have to say that I have enjoyed this series, and someone picking up this book without having read the previous two wouldn't be at a great disadvantage.

What I liked: lots of little twists that made this series unique: rapier/epée based swordsmanship, an interesting, but mostly ignored, magic system, and the banking system. It wasn't really mentioned, but gunpowder, guns and cannons aren't present, nor are heavy two handers and the related plate armour. There's some thought behind that, but it hasn't been shown to us. A nice touch.

The first book (The Tattered Banner) was by far the strongest of the trilogy. It flowed, and had a certain joy in the writing that compelled me to read it, and I allowed that momentum to carry me through the rest. Both the second and the third books were rather episodic, as if the author didn't really have the heart to finish what he had started. This was apparent in a change in style, and not really reusing familiar characters from the first. In fact, only Soren and Amero from the first book play more than cursory roles in this, with a new character taking up many of the pages, and being really the principal actor in the story.

Despite this, I enjoyed the series, and would recommend it (certainly the first).
Read more
3 people found this helpful
Report abuse

Pauline M Ross
4.0 out of 5 stars A fine ending to the trilogy
Reviewed in the United Kingdom on 28 June 2014
Verified Purchase
So here we are at the end of the trilogy. The first book, 'The Tattered Banner', I found a refreshing change from the typical swords-based fantasy, focused as it was around the rapier as the weapon of choice. It was in many ways a conventional coming of age story, a young man discovering unusual abilities in himself and learning to manage his talent, but lifted above the average by excellent writing and some awesome confrontations. The second book, 'The Huntsman's Amulet', was more of a boys’ own adventure, quite episodic and uneven, although hero Soren visited some intriguing locations and there were the usual array of terrific sword fights. And pirates!

This book feels a little slow to start. After some initial action, which convinces Soren that he and his lady love, Alessandra, will never be safe from the assassins sent by his former mentor and now arch-enemy Amero, he spends some time arranging matters so that he can return to Ostenheim with the sole objective of killing Amero. I was a little disappointed that Alessandra, a smart lady perfectly capable of wielding a sword when necessary and protecting herself, was parked in a place of safety so that Soren could go about his murderous business without having to worry about her. However, I could see the logic in it.

Then almost half the book passes with very little happening, as a number of additional characters are introduced, their motivations explained and their activities described in some detail. These are not uninteresting, but some of this felt a bit like filler. The eastern mage, for example, was an interesting character and I would very much like to have known more about his organisation the Twelve, their practices and rules, but in the end he was reduced to just another obstacle for Soren to overcome.

None of the characters really stand out, apart from Soren himself (and maybe the banker). I would have liked a little more description of how he calls upon his 'gift', and more detail of the fights from within his enhanced perspective, which, for me, have always been the most awesome part of the story. Sadly, there is nothing here quite comparable with the fight with the belek in 'The Tattered Banner', but nevertheless all the fights are well-written, even if mostly the outcome is never in doubt. In fact, seeing Soren back amongst the regular street thugs and sell-swords of Ostenheim only serves to underscore just how easy he finds it all. Fortunately for the excitement quota, there are still ways in which he's vulnerable and his careful plans can go off the rails, and the encounter with the eastern mage was dramatically unpredictable.

The descriptions of Ostenheim, in fact the whole of this world the author has created, are excellent, just enough to bring the streets and buildings into sharp focus without distracting from the action. It all feels wonderfully real, brought alive by scores of understated little details. I was rather pleased that the duelling arena where the story first started featured for a significant exchange in this book.

There were a couple of moments that felt suspiciously like logic issues. One is that Amero is in dire straits financially, on the brink of ruination, yet he still managed to find the funds to send assassins repeatedly after Soren. That's one obsessive grudge he's holding. The other is a magical healing that happens late in the book, despite the recipient being resistant to magic and the character who organises it having spent much of the book destroying magic-users. I can see that it was necessary to the plot, and maybe I missed some crucial explanation that made it obvious, but it felt to me like a bit of a fudge.

However, towards the end, all the disparate threads come together into the inevitable final confrontation, the lesser issues cleared away and the focus finally on Soren and his nemesis Amero, and no, it doesn't go at all as planned. This was a wonderful and very fitting climax to the story. Being the end of the trilogy, I honestly had no idea how it would turn out, and the author had several nice surprises up his sleeve, not least the explanation for the title of this book. A terrific ending to a fine series. Four stars.
Read more
2 people found this helpful
Report abuse

Kindle Customer
5.0 out of 5 stars A Fine Ending
Reviewed in the United Kingdom on 26 March 2017
Verified Purchase
Although not the most complex of plots the story-telling is good and the characters real enough to engage the reader.

All in all another good read. Bravo!
Read more
Report abuse

Kindle Customer
3.0 out of 5 stars Three Stars
Reviewed in the United Kingdom on 30 August 2014
Verified Purchase
Reasonable conclusion to the trilogy, leaves scope for more books.
Read more
Report abuse
See all reviews
Back to top
Get to Know Us
Make Money with Us
Let Us Help You
And don't forget:
© 1996-2021, Amazon.com, Inc. or its affiliates