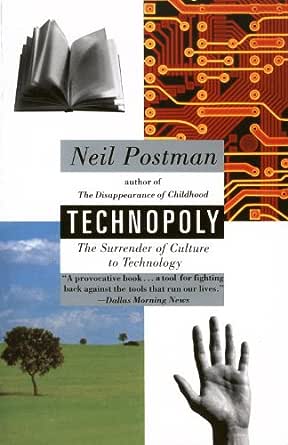 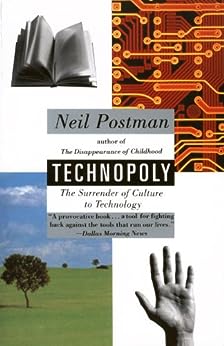 Technopoly: The Surrender of Culture to Technology Kindle Edition

In this witty, often terrifying work of cultural criticism, the author of Amusing Ourselves to Death chronicles our transformation into a Technopoly: a society that no longer merely uses technology as a support system but instead is shaped by it—with radical consequences for the meanings of politics, art, education, intelligence, and truth.
See all Product description

Zach
5.0 out of 5 stars What have we lost?
1 October 2017 - Published on Amazon.com
Verified Purchase
I think what I like the most about Neil Postman's Technopoly is how he never denies the advances science has made, but points to the very existence and rise of technology and science and asks the extremely significant question, "What have we lost?" The subtitle for his book is "The Surrender of Culture to Technology," which is a very concise summary of the argument of his book. Though, by the end, he seems to have portrayed the rise of the modern American Technopoly more as a degeneration and undermining of the cultural meaning and purpose undergirding our entire society.

As one who absolutely loves progress and scientific advancement, I found myself nodding my head again and again as he critiqued how our culture has mindlessly and carelessly embraced a scientific approach to life which ultimately has no purpose or meaning for its existence. Ultimately, I would argue that his critique is that science and technology move us so furiously in the realm of doing things that we are losing all concept of what it means to be human.

As much as his book is a critique of the underlying philosophies of this age, his is not a Christian approach. While I found his critiques valid, it saddened me to see his careless disregard for religion. As much as he lamented a cultural philosophy which embraces modernity and progress over and against the past, his rejection of religion bore all the traits of a dismissal based on the assumption, "We've developed (progressed) beyond that now...." In short, his uncritical dismissal of religion belies a blindspot in his own reasoning.

That said, I did enjoy, in his concluding chapter, the assertion of the need for classical elements in educational curriculum, both in literature and sciences and the arts. Included in this is an argument for the inclusion of an overview of religions and their histories. He asserts no religion over any other, and I'm curious exactly how he thinks such a thing should be taught - but I enjoyed the fact that he included the thought.

The book itself was written in an engaging manner, and I think it would be accessible to most readers of almost any education level. I would especially encourage any teachers or educators to read the book, for many of his critiques have fascinating and significant implications in the realm of education. I would also encourage pastors to read the book, because it offers a critique of modern culture which includes many specific areas which will help Pastors think well about culture and how it impacts people. Overall a great and insightful book, and a pretty easy read.

JD
5.0 out of 5 stars Vital and Powerful Examination of Forces Most Don't Realize Operation on Them
29 May 2017 - Published on Amazon.com
Verified Purchase
Stunning and original work. The author Neil Postman sets the tone at the outset that this is no ordinary work. His interpretation of Plato's Myth of Thamus and Theus is one of the wisest and perhaps most penetrating openings I've ever read. This sets up a lucid description of the interplay between man, religion, and machine thru time dating all way back to ancient Greeks.

Although he overplays his hand a bit when discussing what he perceives as technology's totalitarian grip on society, more broadly his argument has merit, explanatory insight, and predictive value. (Overplayed for example that "Technopoly" completely robs us of history, when in fact the data boom it can be argued is creating a clearer record of it.) But this is a minor criticism, as overall his critiques and insights are spot-on ... it's almost as if he's viewing the world from a 4th dimension the rest of us can't see...or more superstitiously, he's clairvoyant. From this he raises important challenges to the Information Age ethos that insufficient information is the assumed source of major problems, for example from this passage:

He provides a clear rebuke to the notion that social science is superior to literary tradition in understanding human behavior. It's ultimately about the age of old challenge of converting qualitative information into quantitative information, so it be made into a form to make generalized observations about large populations and bespoke ones about its individuals. Postman clearly reasons that abstraction and generalization that are made to seem irrefutable by attaching the qualifier "science" to "social" clearly do much more harm than good.

This book goes to dark places, and perhaps "dark" is the best word to describe its overall tone. At times I found myself reading it not because I wanted to, but because I had to. But with an inspiring final chapter on how to counter the negative consequences of what he calls "Technopoly", and uplifting commentary on mankind derived from the classic "Ascent of Man", it ends on a liberating note.

Again I'm not saying it's a perfect work either ... I wonder for example how Postman would view advances in AI nearly 30 years since publish date at being more "human-like". He seems to assume that people will always be more morally responsible than machines. But with all the strife in the world can we rely on human judgement and action, versus a machine that be programmed to behave within strict guidelines? He also makes his own presumed unchallengable "leap of faith" that life without meaning is essentially the worse kind. Something that a zen Buddhist could launch a serious challenge to, as in destructiveness of "gaining" notions.

My own criticisms aside, this remains one of the most fundamentally important works I've ever read. It's also very topical and an important reality-check with all the hype-selling these days in tech (some of it most certainly legit, some most certainly not).
Read more
10 people found this helpful

Daniel J. Green
1.0 out of 5 stars Put your earplugs in before reading.
2 May 2018 - Published on Amazon.com
Verified Purchase
In a somewhat disorganized rehash of more visionary arguments expressed in McLuhan's "Understanding Media", and of less angry analysis in Bloom's "Closing of the American Mind", Postman stops short of alleging Progressive conspiracy to undermine our culture, and stops well short of suggesting any practical antidote. And that's a shame, because that would have been the book we needed. While the overall arc of Postman's argument seems correct, he gives examples from fields about which he knows little, exposing his ignorance and leaving me feeling like he's jousting windmills. Not that there isn't an actual Progressive attack on our culture, but because he mislocates the source of the cancer. His book would be more helpful if he whined less and researched his sources a bit more...including McLuhan. The unfortunate impression this book leaves is that McLuhan is a Dennis-Kucinich-like wing nut, hunkered in a corner muttering oracular hallucinations about whether UFOs are hot or cold media with as much power to shape culture as paper clips and fruit cocktail....whereas McLuhan is insightful and probably has the answer we seek. While I want to like him, Postman is like the loud and pushy neighbor who won't leave your doorstep and talks about politics you agree with but who speaks in terms so crass you feel embarrassed to agree...he is a crank, tone-deaf to McLuhan, dismissive of practical solutions, who raises his fists and screams loudly at us to turn off our Madonna, stop reading polls, and while we're at it, get off his lawn.
Read more
5 people found this helpful
Go to Amazon.com to see all 120 reviews 4.0 out of 5 stars
Get FREE delivery with Amazon Prime
Prime members enjoy FREE Delivery and exclusive access to movies, TV shows, music, Kindle e-books, Twitch Prime, and more.
> Get Started
Back to top
Get to Know Us
Make Money with Us
Let Us Help You
And don't forget:
© 1996-2020, Amazon.com, Inc. or its affiliates