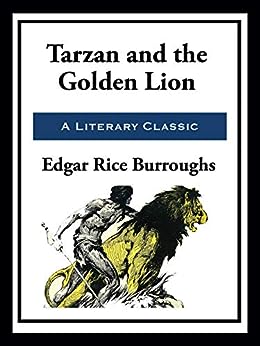 Edgar Rice Burroughs (1875 - 1950) Edgar Rice Burroughs was a prolific American author of the 'pulp' era. The son of a Civil War veteran, he saw brief military service with the 7TH U.S. Cavalry before he was diagnosed with a heart problem and discharged. After working for five years in his father's business, Burroughs left for a string of disparate and short-lived jobs, and was working as a pencil sharpener wholesaler when he decided to try his hand at writing. He found almost instant success when his story 'Under the Moons of Mars' was serialised in All-Story Magazine in 1912, earning him the then-princely sum of $400. Burroughs went on to have tremendous success as a writer, his wide-ranging imagination taking in other planets (John Carter of Mars and Carson of Venus), a hollow earth (Pellucidar), a lost world, westerns, historicals and adventure stories. Although he wrote in many genres, Burroughs is best known for his creation of the archetypal jungle hero, Tarzan. Edgar Rice Burroughs died in 1950. For more information see www.sf-encyclopedia.com/entry/burroughs_edgar_rice --This text refers to an alternate kindle_edition edition.

John M Reading
1.0 out of 5 stars Not written in accurate English
Reviewed in the United Kingdom on 15 September 2019
Verified Purchase
An awful edition! Not written in acceptable English - e.g. ‘ape guy’ Where did that come from? Only read the first few pages and then gave up in disgust.
Read more
Report abuse

Peter Jones
4.0 out of 5 stars N/A
Reviewed in the United Kingdom on 7 June 2019
Verified Purchase
Since it was a book I used it for reading
Read more
Report abuse

Mike
5.0 out of 5 stars Super
Reviewed in Canada on 4 November 2020
Verified Purchase
He is a very versatile writter
Read more
Report abuse

emir
5.0 out of 5 stars Good
Reviewed in the United States on 3 January 2020
Verified Purchase
It came really fast and in good condition. I recommend it. Tarzan and The Golden Lion is a superb Tarzan story with the best ingredients for a great Tarzan story.
Read more
Report abuse

Thom
4.0 out of 5 stars Good Adventure story
Reviewed in the United States on 18 November 2017
Verified Purchase
I read most of the Tarzan books as a youth and occasionally re-read some of the stories for light entertainment. I avoid violent and gory stuff so these books are sometimes just right.
Read more
Report abuse
See all reviews
Back to top
Get to Know Us
Make Money with Us
Let Us Help You
And don't forget:
© 1996-2021, Amazon.com, Inc. or its affiliates