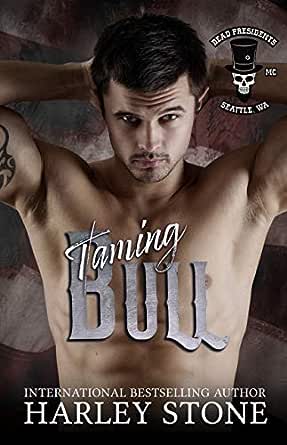 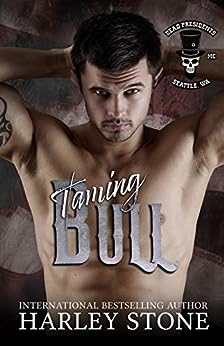 The hot mess library
TOP 500 REVIEWER
4.0 out of 5 stars Such a good series!
Reviewed in Australia on 12 October 2020
Taming Bull is a friends to lovers read in the Dead Presidents MC series by Harley Stone. The book looks at Lily Perkins, a woman who has been through some trauma, but she isn’t going to let that stop her. She has been in love with her best friend Deryk ‘Bull” Roberts, but has been officially friend-zoned in the hardest way.
Bull likes Lily and would like to have more with her, but this former military man has demons of his own and doesn’t feel it is fair to start something with Lily. Not only does she not know the truth about his past, but he is worried what others will think about Lily.

This story is about the push and pull between Lily and Bull. Lily tries at times to seduce Bull and at times you think it is going to work, until she is ultimately rejected. We see the hurt that Lily goes through not only to hold onto her friend, but also in dealing with the unrequited love that she feels for him. If only it was one sided!

I really enjoyed reading both characters POV in this book. At times the book was really cute and sad as there were moments where you felt that Lily and Bull wouldn’t get together at all, or even have a surviving friendship. For Bull trying to only be friends with Lily, there certainly were some steamy scenes between the two.

If you have read this series before, you’re going to love seeing characters from previous books and how their own relationships have evolved. I love being back with these families, they’re sassy, sexy and seriously hilarious at times.

ARC received for a fair, honest and sometimes long review. All opinions are my own. 😊

Doris
TOP 500 REVIEWER
5.0 out of 5 stars The Dreaded Friend Zone
Reviewed in Australia on 13 October 2020
Bull and Lily had been friends for two years but Lily was done with that and wanted their friendship to continue on to the next level and that’s when Bull pulled her from the dreaded friend zone only to put her in an even worse category…the sister zone!!

Lily had been through so much in her life that she was willing to fight her way into Bull’s bed and into a relationship she knew he wanted too. Bull had things from his past that kept him from moving forward and it took a friend to point a few things out.

This was a sweet read that had some laugh out loud moments especially with old Mrs. Moore. It’s worth the read just for this lady and her skiing abilities!! You’ll just have to read to find out.
Read more
Helpful
Comment Report abuse
See all reviews

Romancing the Dispatcher
5.0 out of 5 stars A slow burn, friends to lovers romance!
Reviewed in the United States on 12 October 2020
Verified Purchase
A refreshing take on a friends to lovers romance, this story pulled me in right from the beginning. There was just enough drama to make it interesting, but not so much that it wasn't believable. This author has a way of making the characters seem real, and their story seem like you are right in the middle of it when it's happening.

Bull had an amazingly normal childhood. Growing up in a typical southern family, his life seemed to be planned out for him, and he was happy. After going away to serve his time in the military, tragedy struck, and everything spiraled out of control. Life has a way of leading you to where you need to be, especially when you least expect it, but maybe need it the most.

Lily's life has been one bad turn after another. A particularly horrible event leads her to the Dead Presidents MC, and to the one man she is sure is meant to be her future. But nothing in Lily's life has been easy, and it doesn't look like her love life is going to be any different!

I really wasn't sure, at times, that Lily and Bull had a chance. There were just too many emotions, too much standing in their way. Their story was one that really shows that true love wins in the end, even when you don't expect it to. It was a story that tugs at your emotions, and left me in awe at how perfectly right they were together. Absolutely perfect!
Read more
One person found this helpful
Report abuse

Carrie Marie
5.0 out of 5 stars Chemistry wins!
Reviewed in the United States on 13 October 2020
Verified Purchase
I love Lily & Bull's story! Their whole friend zone dance made me want to smack them at times, but I was in good company because I think their friends were all in that same boat til they got it together. LOL

I love both their personalities & how they work together. There are some very deep emotions they need to work through, but also light & fun moments because they've both got that kind of personality. And of course, there is the steam & chemistry they have going on!!

So many things I want to say, but don't want to be spoilery & so I'll just say - Lily & Bull are a great addition to this series & get thumbs up from me!

CeeJay Daisy Booklover
5.0 out of 5 stars ♥️🌼Bull and Lily Are Sweet And Hot And Perfect🌼♥️
Reviewed in the United States on 14 October 2020
Verified Purchase
I’m so thankful Harley Stone has written another Dead Presidents MC book...and I loved it...Taming Bull is about Bull and Lily, who are best friends, who he won’t allow to progress to more...These two have the best chemistry, and the fun and steamy storyline has a twist about Lily, that I’m not sure I’ve seen before...♥️🌼
Every time I see a new Dead Presidents MC book, I want it right now...I have loved this series since the beginning...and Harley Stone gets better with every book....Taming Bull may be my favorite...I’d be fine if she never ends this series....♥️🌼
Read more
Report abuse

Kindle Customer
5.0 out of 5 stars I loved this book!
Reviewed in the United States on 13 October 2020
Verified Purchase
I have to say that Lily and Bull have become my favorites! Lilly with her wit and hilarious sayings. She is a great character. A woman that had been through so much, and worked hard to get her life on track. She did it with her first spirit and humor. She was great. Bull had struggles of his own and demons he needed to lay to rest. Through his friendship with lilly he was able to overcome his obstacles because lilly would not settle for anything less for her best friend. A wonderful friends to lovers romance that had me laughing out loud. Such a great read.
Read more
Report abuse

Vocabulary Master
4.0 out of 5 stars Friend-Zone
Reviewed in the United States on 24 October 2020
Verified Purchase
Book nine in the Dead Presidents MC series. Can be read and enjoyed as stand-alone. Full length told in dual POV with HEA. The Dead Presidents are a motorcycle club where all members are military vets. Each book is about a different member and secondary characters are the same throughout the series. The first half was a little slow for me with Bull being stubborn and pushing Lily away. I really liked Lily; she did not give up, but gave Bull space & friendship until he was ready to put his past behind him.
Read more
Report abuse
See all reviews
Get FREE delivery with Amazon Prime
Prime members enjoy FREE Delivery and exclusive access to movies, TV shows, music, Kindle e-books, Twitch Prime, and more.
> Get Started
Back to top
Get to Know Us
Make Money with Us
Let Us Help You
And don't forget:
© 1996-2020, Amazon.com, Inc. or its affiliates