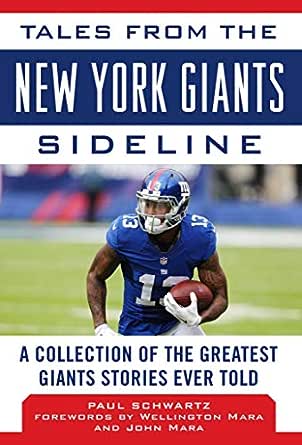 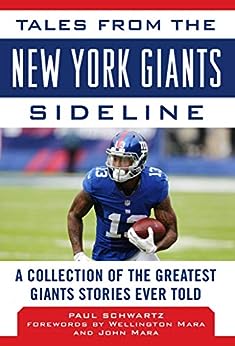 Tales from the New York Giants Sideline: A Collection of the Greatest Giants Stories Ever Told (Tales from the Team) Kindle Edition

Paul Schwartz is a sportswriter for the New York Post, where he has covered the New York Giants since 1994. He is an honors graduate of the University at Albany. In addition to Tales from the New York Giants Sideline, he is also the author of You're Wrong and You're Ugly with Sid Rosenberg. He lives in Great Neck, New York. Wellington Mara (1916-2005) was an icon of the NFL. In 1925 his father, Tim Mara, founded the Giants. In 1959, Mara became co-owner and vice-president. He was inducted into the Pro Football Hall of Fame in 1997. --This text refers to an alternate kindle_edition edition.

Colter Carambio
4.0 out of 5 stars Great anecdotes from the annals of Giants lore
Reviewed in the United States on 13 September 2013
Verified Purchase
As a lifelong Giants fan, someone could write "I love the Giants" over and over again on a page, chalkboard-punishment-style, and I'd probably eat it up, but this book really does bring to light many great stories, especially to younger fans, (somewhat) like myself, who only know of Frank Gifford, Y.A. Tittle, and Sam Huff from the grainy footage in NFL Films productions (miss ya Steve).

In my view, to truly love a team is to understand its current players in the context of past teams great and not-so-great (see the chapters on the '70s for the latter), and this book allows fans of all ages to gain that historical perspective, with amusing anecdotes that really convey the personalities of the players, coaches, and owners. Definitely recommend to any who "bleed blue." Go G-men!

C. Baker
1.0 out of 5 stars Review of Tales from the New York Giants Sideline
Reviewed in the United States on 6 October 2005
Verified Purchase
Tales from the New York Giants Sideline provides the professional football and Giants fan very little. It is poorly organized, provides absolutely no insight into the team, its history, and its championship seasons. Even more disappointing, given that the book is based on interviews with many past and present players and coaches, it gives little insight into the personalities that have given this franchise a unique and deep history. In short, it is a total failure.

The book is divided into six chapters: Training Camp, The Season, The Founder, The Coaches, The Teammates, and The Championships. None of the chapters provide great insight on the given topic. Further, the organization of the book provides no chronological continuity as it jumps all over the place in time and era. Essentially what this book consists of are very short vignettes, in fact vignettes isn't even the right word, short snippets, that give a little nugget of information about the team and players. It's basically a little collection of quotes and comments about the chapter topics.

The players, coaches, and owners that get the most air time, so to speak, are Wellington Mara, Sam Huff, Y.A. Tittle, Frank Gifford, Phil Simms, and Bill Parcels. Of course other players and events are touched upon, but not in any meaningful way. Yes, Lawrence Taylor is in here, but mostly only in embarrassing situations.

Very unfortunately is that there is a little bit, but not nearly enough, about some of the most important events in Giants history. Want to know a little bit about one of the seminal games in NFL History, the 1958 NFL Championship between the Giants and Baltimore Colts (the first overtime game in NFL history)? You won't get much here. Want to know about the Giants' Super Bowl years? You won't get a lot here except a few quotes and comments. In short, you don't get much at all with this book.

Thus, I would not recommend this book to a football fan or Giants fan. There is just not enough information or good storytelling here to make this book worthwhile. It is a quick and easy read, but even casual Giants' fans are not likely to learn anything particularly new or worthwhile.

The author of this book has covered the New York Giants for the New York Post since 1994. The Giants have had mostly mediocre results during this time frame, this book is less than mediocre.

KeoniBoy
5.0 out of 5 stars New York giants football fans
Reviewed in the United States on 19 November 2012
Verified Purchase
If you like the modern giants of Eli manning you will enjoy this book.
I have been a giants fan since the 1960's. Those were the days of
Y a tittle frank Gifford del shofner Phil king Sam huff allie sherman
Pat summerall and the original old Yankee stadium! Happy reading
Giants fans! Aloha haleiwa jon
Read more
One person found this helpful
Report abuse

Cliente Amazon
3.0 out of 5 stars too much old stories, not enough from the recent players
Reviewed in the United States on 15 March 2013
Verified Purchase
While it is interesting to know about the history of the team, and the stories of old coaches and players, I thought it lacked more info regarding the players of this generation.
Read more
Report abuse
See all reviews
Get FREE delivery with Amazon Prime
Prime members enjoy FREE Delivery and exclusive access to movies, TV shows, music, Kindle e-books, Twitch Prime, and more.
> Get Started
Back to top
Get to Know Us
Make Money with Us
Let Us Help You
And don't forget:
© 1996-2020, Amazon.com, Inc. or its affiliates