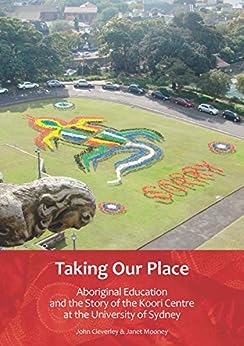 Taking Our Place: Aboriginal Education and the Story of the Koori Centre at the University of Sydney Kindle Edition

Taking Our Place tells the story of Aboriginal education and the Koori Centre at the University of Sydney. Within its short history, the university has embodied both the virtues and vices of Australia's public attitudes to Indigenous people. The university's early teaching and research focused on Aboriginal people as ethnographical specimens, a race frozen in time.

More than a century would pass before two students identified as Aborigines, Charles Perkins and Peter Williams, entered the university gates. It was 1963. From that time on, an increasing numbers of Indigenous Australians have studied and worked at the university, contributing their knowledge and understanding to a learning society from which they were once absent. Much more remains to be done.

This is the first account of struggles and outcomes arising from the engagement of Indigenous people with a tertiary institution in Australia, a place established by a white elite for its own purposes on land taken from the Eora people. Today, the University of Sydney promotes and celebrates the diversity of Indigenous education on campus.

John Cleverley (1931-2014) was appointed director of the Aboriginal teachers aides training program in 1984 and continued to serve as director 'on and off' until 1991. Following his retirement, John has continued an association with the Koori Centre through to the present in mentoring and special project activities.