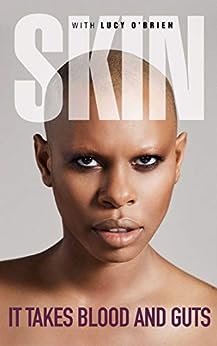 ‘The epic tale of Glastonbury’s Black British headliner… Skin is one of the Britpop decade’s forgotten epics… Skin’s feet are positioned firmly on the ground throughout; she’s a winningly genial, sweary soul on paper. 4 stars’ -- Jude Rogers, MOJO

‘The pioneering Skunk Anansie frontwoman’s memories offer a very different take on the Britpop era… Skin’s story is one of a rhomboid peg spurning both the round and square hole, drilling dimensions of her own… We now have a lot of language – intersectionality, microaggressions – to describe many of the events in this memoir. However, nothing can really equal candid, first-hand experience, recounted matter of factly here. It would be instructive for anyone who thought they knew the story of the 90s to spend 300 pages in Skin’s Skin.’ ― OBSERVER

‘As a Black gay woman fronting 1990s rock band Skunk Anansie, Skin has broken her fair share of ground, but it has come at a personal cost. This is a story of resilience and courage, prejudice and passion’ ― RED

'One of the most important females in British music of my lifetime.' -- Colin Murray

'A beautiful, raw and exhilarating book that will leave you feeling empowered.' -- Fearne Cotton

‘The former Skunk Anansie singer pulls no punches in this heady trawl through her life from tough beginnings in Brixton to work as an LGBTQ+ activist and beyond’  ― The I --This text refers to an alternate kindle_edition edition.

Skin is one of Britain’s leading and acclaimed rock singers. She is also a fashion icon, a renowned DJ, an actress and an activist.

Born and brought up in Brixton, South London, she rejected the safe haven of soul/R&B session singing by diving headlong into hardcore rock. Since she emerged in the mid ‘90s with Skunk Anansie, Skin has been a groundbreaking presence. As well as fronting one of the UK’s most successful underground bands, Skin is a multi-talented artist and she is currently producing solo Techno music and preparing for an up-and-coming movie role.

Lucy O'Brien is a writer, academic and author of She Bop: The Definitive History of Women in Popular Music, Madonna: Like An Icon and in-depth biographies of Dusty Springfield and Annie Lennox. She has been a good friend of Skin’s since 1995, going to countless Skunk Anansie shows and festival dates.

Lucy was a judge for the Penderyn Music Book Prize, 2018. She was one of the few female staff writers for NME and has contributed to numerous titles including Q, Mojo, NME, the Sunday Times and the Guardian.
--This text refers to an alternate kindle_edition edition.

4.8 out of 5 stars
4.8 out of 5
293 global ratings
How are ratings calculated?
To calculate the overall star rating and percentage breakdown by star, we don’t use a simple average. Instead, our system considers things like how recent a review is and if the reviewer bought the item on Amazon. It also analyses reviews to verify trustworthiness.

Tom Minney
5.0 out of 5 stars Inspiring story, very well told, page turner. Recommend!
Reviewed in the United Kingdom on 22 November 2020
Verified Purchase
Skin is a great musician and writes epic songs about life, but she is also a very positive and dynamic person who sees the best in everyone and loves adventure - of which this book contains many. I love the way she and excellent writer Lucy O'Brien tell her story starting from where her family came from and the influences that shape her childhood, growing up in Brixton with her strict and loving mum providing an anchor in the turbulent racism and anti-racism of the 1980s.
Skin seeks integrity and truth and from her friends gains the confidence to push back at abusive boyfriend and harassment from a street stalker. From these experiences, she realizes the importance of finding her voice. She keeps searching until she discovers who she feels happy to be, the band she loves to play with and the musical energy that makes every concert a best-ever for the audience because of sheer spontaneous energy and raw waves of music.
The book is inspiringly honest, reading between the lines you can see Skin's persistence, discipline and drive in picking up and giving her best again and again. The story is beautifully crafted too, great selection, fastmoving and a page turner as Skin's character and the band's world beating career grow, get setbacks, and eventually recover better into a beautiful positive vibe. Whether you like her music or care to read insights into difficulties and beauties of being Black in Britain - or the world - this is a highly recommended book of honesty, leadership, integrity, respect, passion, history and music, and non-stop searching.
DISCLAIMER: Reviewer is biased.
Read more
2 people found this helpful
Report abuse

Miss S L Scott
5.0 out of 5 stars Really very good!
Reviewed in the United Kingdom on 28 September 2020
Verified Purchase
A wonderfully gripping book about one of music’s most interesting and intriguing personalities, with an incredible list of achievements. At times it is also laugh out loud funny! I couldn’t put it down and have bought several for gifts
Read more
6 people found this helpful
Report abuse

Victoria Camp
5.0 out of 5 stars Skin is epic! Read this book!
Reviewed in the United Kingdom on 7 October 2020
Verified Purchase
What an amazing and insightful book! I love Skin and everything she does - this book was a mixture of real triumph with pragmatism all mixed in with her fire, drive and humility! A great read!
Read more
5 people found this helpful
Report abuse

John beardsworth
4.0 out of 5 stars A slow start
Reviewed in the United Kingdom on 23 November 2020
Verified Purchase
The book was a bit slow to start for me and I found it hard to get into it. But as it goes on and once it gets more into skunk anansie and everything revolving around the band it gets really good. Skin is just a legend, a must read for any fan of the band or just skin herself
Read more
Report abuse

Christopher Baddoo
5.0 out of 5 stars A wonderful read
Reviewed in the United Kingdom on 27 February 2021
Verified Purchase
What a fantastic read if you’re a fan you will love the book it is brilliant really good value for money on Amazon too
Read more
Report abuse
See all reviews
Back to top
Get to Know Us
Make Money with Us
Let Us Help You
And don't forget:
© 1996-2021, Amazon.com, Inc. or its affiliates