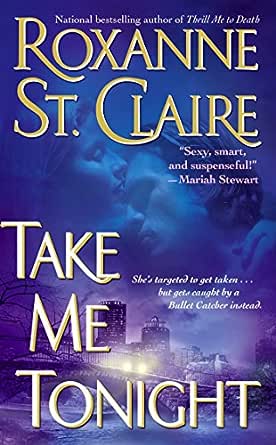 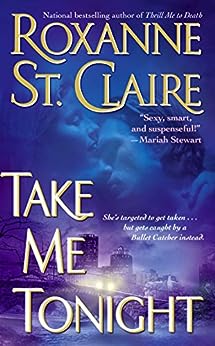 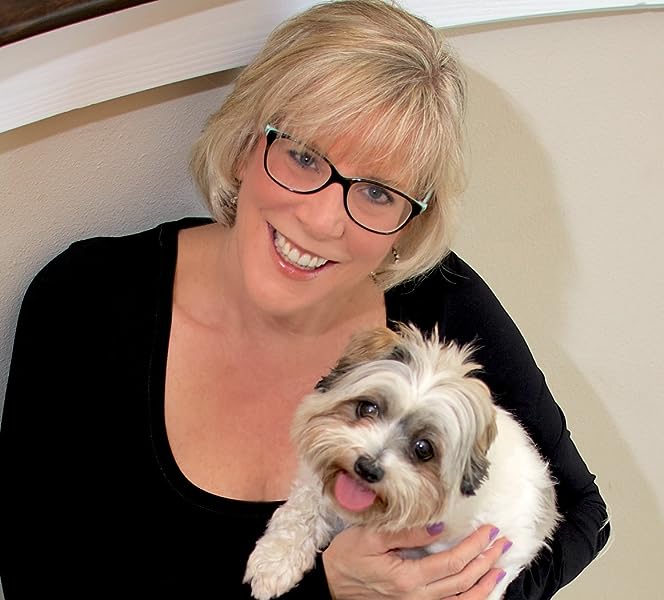 "Sexy, smart, and suspenseful, Take Me Tonight is an absolute must-read. Roxanne St. Claire's Bullet Catchers series defines the very best in romantic suspense -- if you haven't read one yet, what are you waiting for? Take Me Tonight proves that St. Claire really rocks."

Roxanne St. Claire is the author of the Bullet Catchers series and the critically acclaimed romantic suspense novels Killer Curves, French Twist, and Tropical Getaway. The national bestselling author of more than seventeen novels, Roxanne has won the Romance Writers of America's RITA Award, the Bookseller's Best Award, the Book Buyers "Top Pick," the HOLT Medallion, and the Daphne Du Maurier Award for Best Romantic Suspense. Find out more at RoxanneStClaire.com, at Twitter.com/RoxanneStClaire, and at Facebook.com/RoxanneStClaire. --This text refers to the mass_market edition.

Linnikins
5.0 out of 5 stars Hard to get into but breathtaking toward the end.
Reviewed in the United States on 17 July 2020
Verified Purchase
Roxanne St. Claire, is one of my favorite authors. She is multifaceted as a writer, sweet romantic, mysterious, sometimes very hot. This book encompasses all those qualities. For some reason I had a hard time getting into the story line, I read most books in a day or two at most. This one took 10 days. Partly because I am waiting on Breezie Bennett 's next book, partly because of isolation and trying to drag it out. I finally hit the point in the book where the story line really took off as Rixi's books always do and I couldn't put it down. It's well worth the read if only to get to the end. Roxanne did it again!!
Read more
Report abuse

Frenchy0311
4.0 out of 5 stars God I'm so torn with how to give this review
Reviewed in the United States on 28 August 2018
Verified Purchase
First let me say it was a great suspense and mystery, and I couldn't put it down. BUUUUT, the main H had to lie to the h the whole book to keep her protected, and by the end of the book she found out the lies and reasons for having them so they were essentially lies for no good reason, but by then I just resented him for lying for so long and for stupid reasons. I'm probably the only one who will have read this book and had this reaction. I would give a5 star rating of i liked the H, but I just didnt. He CHOSE to lie. Some will say it was for what he felt was a good reason, but I disagree. There was just soooo many lies. At some point you have to decide the person you love should deserve the TRUTH, and not more lies to spare their pathetic widdle heart. Sorry, it just pissed me offf. Lol
Read more
Report abuse

Sparkymom
5.0 out of 5 stars Great
Reviewed in the United States on 20 January 2015
Verified Purchase
Johnny was the sweetest most romantic guy ever. Sage was the most stubborn and suspicious woman ever. The two butted heads in the best way. Sage is trying to find out what happened to cause her friend's alleged suicide. Johnny works for the aunt Sage despises and must lie to Sage in order to disguise that fact as he follows his orders to protect her. Sage mistakenly assumes Johnny is a paid rescuer who also is paid for sexual experiences. He does nothing to dissuade this notion but does do everything in his power to help Sage discover who hurt her friend. In the meantime, he falls in love knowing eventually she will discover the truth and hate him for it. Sage ignores her doubts about Johnny and charges headlong into her investigation, placing herself in the sights I'd a killer who is closer than she knows.

I am enjoying this series and have already bought the next book.

Alyce In Wonderland
4.0 out of 5 stars Unique story with romance & mystery. A delicious hero who cooks in the kitchen & bedroom. Heroine was disappointing & annoying.
Reviewed in the United States on 1 November 2007
Verified Purchase
The Bullet Catchers Series:

Thrill Me to Death

I'm hooked on this series. The heroes are always totally edible. The stories are enthralling. Roxanne St. Claire writes terrific mystery plots that keep you interested with plenty of twists. Some scenes are so intense you'll be literally holding your breath, while your adrenaline pumps through your body. Her outcomes are never easily predicted. I also love the fact that her hero characters tend to be muscle on the outside, but tender- hearted on the inside. When these guys fall in love, they are not afraid to let their woman know it. While drawing a gun with their right hand, they are holding their lover's hand with the left. "Johnny", the hero in "Take Me Tonight", fits that roll gorgeously. (And I do mean "gorgeous"! If you see his photo on Roxanne St. Clare's web site, it is the exact photo that is described of him in the midst of this story. Holy cow! HOT!!!!! Is it legal to look that good?!)

Sage Valentine is an investigative reporter. She now is desperately investigating the murder of her best friend. She approaches her Aunt Lucy, founder of the Bullet Catchers, for help with the case. Lucy turns her down. Bullet Catchers are bodyguards, not detectives. However, Lucy knows that her niece is bound to keep hunting for answers. To keep Sage safe, Lucy sends her most loyal Bullet Catcher undercover. Johnny Christiano is given the task of hiding his position with the BC's so that he can watch out for Sage. Sage thinks he is just a beautiful man who wants to be her boyfriend. Johnny finds himself truly wanting that more and more. He fears Sage will never forgive him when she learns that he has lied about his identity.

Sage's deceased friend, Keisha, was a cheerleader for Boston's NBA team, The Blizzard. Strange things are happening to Keisha's teammates. Some are disappearing, then showing up with memory loss. Others are being found dead. Keisha's death was pronounced a suicide. Sage doesn't believe it. To get the answers she seeks, Sage will dig into the twisted world that Keisha and her teammates are struggling to survive. Johnny can do nothing to convince Sage to stay out of danger. His only choice is to follow her in and help her find the answers, while keeping himself between Sage and those who would see her dead before she learns too much.

My only disappointment with this book was Sage's character. I admire a heroine who is brave and strong. However I'm always turned off when "brave" crosses over to "completely without common sense". Johnny would try to scope out dangerous situations, gun in hand, moving room to room in silence, telling Sage to wait until he is sure it is safe. Instead of seeing the sense in that, Sage would totally ignore him and walk right into the room loudly and unarmed. Is she bullet proof, suicidal, or just stupid? It really bothers me when women are written to be so brainless.
Worse, was the fact that Sage was extremely hypocritical. Part of Johnny's cover was pretending to work for a company where men would sleep with the clients. Over and over she referred to him as a "male prostitute". She had no respect for him because of the job. However, she believed that it was completely acceptable that she used sex to try to convince Johnny to give her answers for her investigation. She brings him to the brink of "completion", then stops cold and says she'll finish for him if he answers her questions. In my book, a prostitute is a prostitute... whether the fee is paid with money, favors, or answers.
Sage's character brought this 5- star story down to a 4 for me.

If you like romantic tales with protective men and modern women, try these:

Sue
3.0 out of 5 stars Weak book in strong series
Reviewed in the United States on 12 August 2014
Verified Purchase
I love this series and highly recommend the romance books by St Claire. However, this didn't work for me. I didn't believe the romantic relationship. It was awkward, kinky, and forced to fit the point rather than develop in any meaningful way. The plot premise was also forced although the basic concept was clever. The pieces just did not work together enough for me to feel pulled into the experience. I skipped some of it to get to the point. The series is fantastic. Read this if you want to experience the entire set or skip this one book but do not skip the Bullet Catchers. They are fantastic.
Read more
One person found this helpful
Report abuse
See all reviews
Get FREE delivery with Amazon Prime
Prime members enjoy FREE Delivery and exclusive access to movies, TV shows, music, Kindle e-books, Twitch Prime, and more.
> Get Started
Back to top
Get to Know Us
Make Money with Us
Let Us Help You
And don't forget:
© 1996-2020, Amazon.com, Inc. or its affiliates