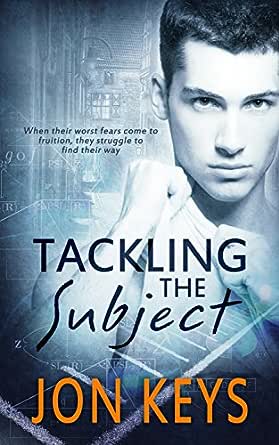 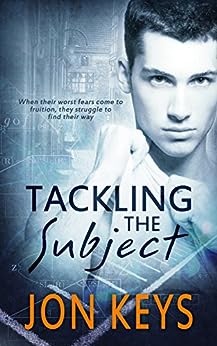 Sam struggles with issues from high school and his biology tutor triggers them all. Gordy isn’t sure he wants to deal with the trouble Sam represents.

Sam Doherty, a twenty-two-year-old computer science major, is struggling to pass the required classes in biology. While Sam is out and proud, he’s secretly dealing with an assault he suffered in high school. Sam may be the president of the campus Gay-Straight Alliance, but he’s struggling to find balance in his life. When he realizes he needs help with his class, he signs up for a biology tutor, but the guy who arrives for their meeting sets off all his triggers.

Gordy Hager is a biology whiz kid, the best tutor at the University Help Center—and the star tackle on the football team. Sam despises him at first sight. Gordy is the brainless caveman athlete that Sam still has nightmares about. Unable to control his reactions, he drives Gordy away and makes it plain he will never ask for his help. One week and a failed quiz later, Sam knows he has to swallow his pride.

But while Gordy might be a nice guy, he isn’t going to help someone as insulting as Sam. Sam’s determination pays off, and he gets Gordy’s assistance, but his grades are only the first pothole their relationship hits. From their discovery that they both are gay, to supporting each other against family, their connection has more than its share of issues. But when their worst fears come to fruition, they struggle with a way to save Gordy’s college football career and face Sam’s issues of intimacy.

Jon Keys' earliest memories revolve around books; with the first ones he can recall reading himself being "The Warlord of Mars" and anything with Tarzan. (The local library wasn't particularly up to date.) But as puberty set in, he started sneaking his mother's romance magazines and added the world of romance and erotica to his mix of science fiction, fantasy, Native American, westerns and comic books. A voracious reader for almost half a century, Jon has only recently begun creating his own flights of fiction for the entertainment of others. Born in the Southwest and now living in the Midwest, Jon has worked as a ranch hand, teacher, computer tech, roughneck, designer, retail clerk, welder, artist, and, yes, pool boy; with interests ranging from kayaking and hunting to painting and cooking, he draws from a wide range of life experiences to create written works that draw the reader in and wrap them in a good story.
click to open popover

Erica L Chilson
3.0 out of 5 stars 3.5 Stars
2 August 2017 - Published on Amazon.com
I received a copy of this title to read and review for Wicked Reads

Jon Keys is a new-to-me author.

Tackling the Subject had an ease to the writing style, where I was able to immediately fall into the story, without any info-dumpage and inane/over-description.

Sam is a college student who has a dark, painful past, which he carries with him everywhere- the baggage. This colors his interactions with everyone. While I could empathize and sympathize with his past, and how it changes who he is on a soul-level, even with therapy, I couldn't connect with Sam. He had no empathy, besides with animals. Sam lashed out, acted bitter and spiteful to people who didn't deserve it. While I understand how specific settings/types of people could elicit a PTSD type fight/flight reaction in Sam, they don't change his personality. I felt, even if he had a sunshine and rainbows past, he would've been a bit of a self-involved d-bag.

Gordy is an all-around awesome guy. Giving, caring, helpful, witty and smart, and funny. He also loves both humans and animals. He works hard, studies harder, and helps his fellow students out of the kindness of his heart. He's a big, strapping fellow from farm-work and athletics, who forgives and gives second chances while maintaining his self-respect, not coming off as a doormat.

After the beginning, which really had me disliking the narrator (no amount of past trauma is an excuse for treating strangers who you're 'begging' for help like they are disgusting and beneath you) I fell into the rhythm of the story and enjoyed the novel. Sam and Gordy fall in a slow-burn romance, as they get to know one another through studying together and working on the farm, followed by overcoming obstacles.

Gordy gives Sam a balance he needed, drawing out the parts Sam had built prickly walls up to protect. Together, they traverse some angsty drama.

I enjoyed this quick read, and do recommend it to MM romance fans. I'm curious to read more by this author in the future.

DiverseReader
3.0 out of 5 stars It was a nice story
5 August 2017 - Published on Amazon.com
I'm huge fan of both hurt/comfort and New Adult books so when I saw the blurb for Jon Keys' Tackling the Subject, I couldn't wait to dig in. A jock and a nerd, opposites attracting only added to my excitement. I loved the premise, but this one fell just a tad short for me. While I did mostly enjoy the book, there were a few things that detracted from my overall impression.

Sam Doherty is out and proud and needs a biology tutor in the worst way. He's a wiz with computers and coding, but genes and mitosis are out of his realm of understanding. So, like any struggling student, he goes to the Student Help Center to request a tutor. He does not expect super jock and star football player Gordy Hager to walk through the door. To say that these two get off on the wrong foot is more than a little understatement. Their first impressions of one another leave a lot to be desired and they part ways less than amicably. It's not until Sam is completely at the end of his rope that he tries to contact Gordy again and and again and again, with no luck. Finally he resorts to begging, and this finally makes Gordy give him another chance.

Once these two start becoming friends, I was all in. For a bit. Sam's over the top reactions to everything Gordy says and does got frustrating. For his part, Gordy was inordinately sweet and understanding, maybe too much at times, but once Sam's issues and his past come to light it helped me understand Sam better. It doesn't necessarily forgive some of the things he says and does, but it did explain. But really, once I got past all of that, I was really rooting for these guys to get their HEA. The romance was slow to build, but I liked that. It worked for these two that they became such good friends first before the romance and intimacy were added. This is a really quick read and for the most part kept me engaged. The writing was as bit choppy in places, the pace a little slow at times, but overall, a nice story of two guys who are really good for one another. Give this one a try, I think you'll like it.
Read more

nrevvy
3.0 out of 5 stars Good NA story
5 August 2017 - Published on Amazon.com
I read this story on a whim, liking the idea of a hurt/comfort story and trying a new author. All third person, the story was quite sweet and tender at times, there was realism in the affects of the attack on Sam, and Gordy’s concerns were authentic. When Sam meets Gordy, he reacts negatively and is extremely rude in his rejection of the tutor. This was less mean than he was with some following rejections of poor Gordy. It was made more understandable as details revealed how deep his trauma ran. I still felt Gordy was too forgiving and might have demanded more acknowledgment from Sam about his behavior. I did connect with Gordy and Sam, just not as strongly as I would have preferred. Following the initial friendship and growing feelings between them, gave good insight to their characters but the execution and pacing was sometimes inconsistent, including Sam’s reactions to Gordy as they became physical. Time jumps weren’t always transitioned well and made the progression of their relationship harder to follow.

When Gordy decided to come out to his family, rather than doing it just for himself, it felt as if he was motivated by Sam’s harsh remarks. That seemed wrong, set against Sam’s involvement in the Gay-Straight Alliance, psychological issues or not. I did like that it wasn’t shown becoming excessively dramatic with Gordy’s family. However, the situation set up by the football coach was over the top, with the caricature thug. I wasn’t impressed with some overly detailed sex scenes or the repeated interrupted attempts. Some seemed unnecessary. As a whole, it was executed well in parts, some not as well and my aging viewpoint might have colored other impressions. I view it as an NA book, since they were college age and as I’m several decades removed, you may want to take my views with a grain of salt.

*An ARC was provided to me by the publisher via Jessie G Books Reviews, for an impartial review*
Read more
Go to Amazon.com to see all 3 reviews 3.0 out of 5 stars
Get FREE delivery with Amazon Prime
Prime members enjoy FREE Delivery and exclusive access to movies, TV shows, music, Kindle e-books, Twitch Prime, and more.
> Get Started
Back to top
Get to Know Us
Make Money with Us
Let Us Help You
And don't forget:
© 1996-2020, Amazon.com, Inc. or its affiliates