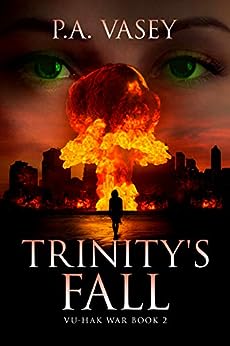 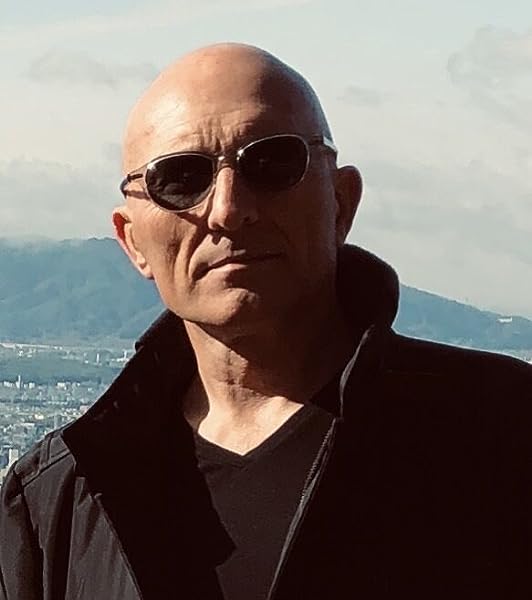 Tara Lee
5.0 out of 5 stars A riveting follow-up to the #1 bestselling Trinity's Legacy
Reviewed in Australia on 13 December 2019
Verified Purchase
This is the 2nd installment in the Vu-Hak War trilogy, and like book 1, the story did not disappoint. It pulls you in from the very beginning and does not let go until the end.

PA Vasey has skillfully moved the story along at a breath-taking pace as we are swept along in a plot that keeps the reader both interested and intrigued as we move closer towards the upcoming conclusion of this exciting new trilogy.

This gripping novel continues Kate's incredible struggle for the survival of the human race, against seemingly impossible odds. Fortunately she has help from a few new friends, as well as some we have met before.

Book 2 takes us on a journey across time and space, and the scenes are described so well that it is easy to visualise what is happening throughout the story.

In the sequel to Trinity's Legacy, PA Vasey answers some of the questions raised in book 1, while also leaving the reader with a few more. I am eagerly awaiting the release of book 3, which is due in late 2020, to see what is in store for Kate, her friends and the human race.

I would definately recommend this series if you are a fan of sci-fi.... and even if you are not.
Read more
Helpful
Report abuse

Sarah Fisher
5.0 out of 5 stars Enthralling
Reviewed in Australia on 6 January 2020
Verified Purchase
Definitely read Trinity's Legacy before you crack into this one, then strap yourself in.

I found this a wonderful story. Expertly woven and beautifully balanced between action, evocative and detailed description, emotion, character, science and philosophy. I will be thinking about this story for a long time, churning over the myriad questions it raises. It explores the BIG questions through character and avoids moralising. I will read this book again – to pick up details I glossed over in my rush to ‘find out what happens’.
Read more
Helpful
Report abuse

AussieSciFiFan
5.0 out of 5 stars What a thrilling second chapter to a nail biting trilogy!
Reviewed in Australia on 22 December 2019
Verified Purchase
Absolutely loved this second part to the trinity’s trilogy. The author seamlessly tied book one to book two by making you feel like you hadn’t been away from the story for longer than a minute. This book is a roller coaster ride the whole way through and true page turner. Vasey has created a group of characters that you really care for and their stories are equally engaging. There are twists and turns throughout the whole book but honestly one of the best books I’ve read this year — another being his first book — Trinity’s Legacy! Highly recommend reading the first 2 parts of this trilogy and I cannot wait to read the final chapter!
Read more
Helpful
Report abuse

MT
5.0 out of 5 stars Entertaining suspense continues in book 2
Reviewed in Australia on 23 February 2020
Verified Purchase
This series is unfolding with unexpected turns that keep the reader truly engaged whilst growing their interest in the likeable characters from book #1. The skilful narrative teleported me deep into many scenes. I found myself silently screaming encouragement for the characters when their bare strength was threatened. Well done, tops my 2020 list and eager to see what the finale brings!
Read more
Helpful
Report abuse
See all reviews

Dr Sami Timimi
5.0 out of 5 stars Excellent and gripping sequel
Reviewed in the United Kingdom on 12 December 2019
Verified Purchase
If you enjoyed the first book in this trilogy you'll love this follow up. The action is well paced, meaning that it's hard to put this book down once you start. mixing galactic backdrops with prosaic close quarters action and description, the narrative sweeps you along through multiple unexpected turns that start to piece together the overarching story as you get towards the end. A thoroughly satisfying read. Can't wait for the final instalment.
Read more
Report abuse

Willowsticks
5.0 out of 5 stars Looks like its curtains for the human race
Reviewed in the United Kingdom on 16 December 2019
Verified Purchase
Imaginative and fast paced sequel to Trinity's Legacy. very enjoyable. C'mon the humans!
Read more
Report abuse

Winston J. Phillips
4.0 out of 5 stars A well-written story...
Reviewed in the United States on 18 January 2020
Verified Purchase
I did not have access to the Volume 1 of this series, so I had to pick up the story in the second - Trinity’s Fall (Vu-Hak War Book 2) by PA Vasey. The book blurb tells us the following: “The Vu-Hak are here. In huge numbers. Invisible. Wraith-like aliens are already here attacking Earth. We deduce that the Vu-Hak are an alien species with advanced weapons technology, and advanced machines and they are bent on destroying the human race. They can enter into minds and wipe memories, and can capture the consciousness of dead humans and integrate them into machines several times more mentally and physically powerful and faster than the average human. They can change outward characteristics of themselves and captives at will.
They had entered through a wormhole portal which was believed to have been closed but that character was believed to have died in the effort. Thee few characters we meet in the early chapters are worried that the Vu-Hak are on Earth and are taking over. We meet Dr. Kate Morgan who has had her memory wiped; Adam Benedict, closer of the portal but who appears in different places in (or on) different entities; and FBI staff Colleen Stillman and Director Hubert. And there is the character Cain, who does not seem to be either human nor Vu-Hak, but who guides them into searching for and rounding up machines and preparing for destruction, and subsequent human regeneration.
Unlike me, devotees of the Sci-fi genre would quickly link up the characters and actions of this book. At times I found the plot to be quite complex especially as individuals seek to avoid or face the Vu-Hak machines and the group tries to devise the way forward. The same can be said of the technology jargon. But I found the idea of a self-morphing spaceship mysterious and intriguing, There is a lot of action and suspense which captured the attention of this reader. I liked the main characters: Cain ( seemingly a ‘protecting angel’); Kate, and Colleen. At times it is not clear that they are working together, and there is disagreement when the question arises what to do as Earth is being bombarded by all types of nuclear weapons. When they do agree, it is to find out that Cain had already captured many machines and had put efforts in train (including the airship) to ‘reseed’ the human population perhaps in some other place..
The best quality of the book, however is in the writing. The author is excellent in describing scenes and experiences in graphic, poetic detail. This will probably be the first thing to arrest your attention, as it did mine. Here is a sample: ” She blinked again and saw blackened bodies,charred bones, as fire tainted the earth, stripping trees of their virescent beauty, leaving gaunt skeletal grey remains, bony toes rooted to barren soil.”
A well-written story....
Read more
Report abuse

KMB13
5.0 out of 5 stars Let's Save the Human Race
Reviewed in the United States on 21 February 2020
Verified Purchase
Did you read book 1 in this series? If not, don’t worry. The first chapters of Trinity’s Fall (Vu-Hak War Book 2) by PA Vasey will give you all the details you need to appreciate and enjoy book 2.

This series makes readers think about the possibility that invaders might already be among us. And humans might not even realize that they’re hosting an invader. Can you imagine finding out that you’re not who you’ve always thought you were?

Plenty of action in this book is geared toward saving the human race from the invaders. Descriptions are well done – you won’t get lost in the complex situations. Just enjoy!
Read more
One person found this helpful
Report abuse
See all reviews
Back to top
Get to Know Us
Make Money with Us
Let Us Help You
And don't forget:
© 1996-2021, Amazon.com, Inc. or its affiliates