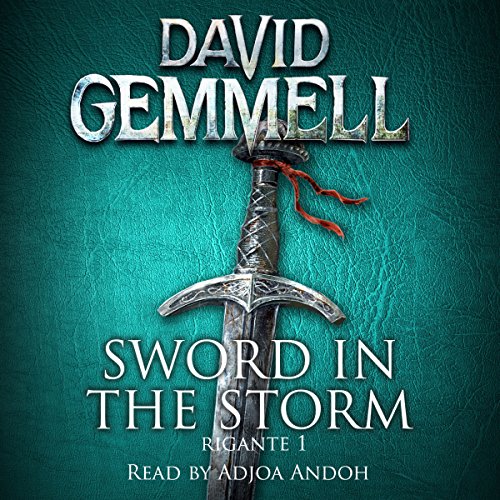 Sword in the Storm: Rigante, Book 1

Born in the storm that doomed his father, Connavar grows to manhood among the mist-covered mountains of Caer Druagh, where the Rigante tribe dwell in harmony with the land and its gods. But beyond the border, across the water, an evil force is gathering strength, an unstoppable force that will change the world beyond all recognition. Haunted by malevolent spirits and hunted by evil men, Connavar sets out on a spectacular mission to save his people.

From the master of the genre, this is a tale of love and honour, friendship and courage, as Gemmell explores the intriguing worlds of Celtic myth and earth magic.

4.6 out of 5 stars
4.6 out of 5
1,189 global ratings
How are ratings calculated?
To calculate the overall star rating and percentage breakdown by star, we don’t use a simple average. Instead, our system considers things like how recent a review is and if the reviewer bought the item on Amazon. It also analyses reviews to verify trustworthiness.

Michael Samuels
3.0 out of 5 stars Incredible book, but don't buy it on audible
Reviewed in Australia on 5 June 2019
Verified Purchase
The woman's narration is generally fantastic - except when she does voices. She lays thick accents onto some characters that make their words difficult to hear, and which robs them of proper emotion and inflection. It's unnecessary, especially since some of these characters shouldn't have accents based on where they've been living.

The book itself is 5/5
Read more
Helpful
Report abuse

Pamela
5.0 out of 5 stars Five Stars
Reviewed in Australia on 8 May 2016
Verified Purchase
Another great read by David Gemmell.
Have totally enjoyed the Rigante series.
Read more
One person found this helpful
Helpful
Report abuse
See all reviews

Clemens A. Schoonderwoert
5.0 out of 5 stars A Magnificent Heroic Opening Scene!
Reviewed in the United Kingdom on 22 July 2020
Verified Purchase
This eventful heroic fantasy adventure is the 1st volume of the "Rigante" series from the author, the late, David Gemmell.

Story-telling is of a top-notch quality, the tale is very well structured and executed by the author, and all the characters come wonderfully to life within this gripping adventure.

This series is about Connavar, son of Varracon, a Rigante who's raised by his stepfather and his father's best friend, Ruathain.

At first the tale gives us an account of Connavar's achievements within his own settlement, Three Streams, part of the Keltoi tribe and called the Rigante, who live in the North (of Britannia), which includes slaying a bear, and his friendship with the invalid, Riamfada, by learning him to swim.

His friendship with the Foreigner, Banouin, of the Stone people, will also be very important to Connavar in this tale, because this friendship will enrich his life for the good and bad, for while travelling with Banouin to his land, Connavar will encounter not only the workings and brutality of the Stone people, but also of the other Keltoi tribes.

Sadly his friend, Banouin, will get betrayed and murdered by the Perdii King, Carac, and the merchant, Diatka, and Connavar swears revenge on the whole tribe of the Perdii, which will eventually happen thanks to the Stone people and their conquering.

What is to follow is a fantastic action-packed and fast-paced fantasy adventure, and which is based in my opinion on the Celts and the Romans, but given somewhat different names, and in this adventure Connavar will learn the workings of the world and how to deal with his feelings of love and anger, trust and treachery, and to use his knowledge of the the Stone people in an effort to survive the threat that will come for him and his Rigante tribe.

Very much recommended, for this is the 1st great volume of a fabulous series, and what this episode is concerned I like to call it: "A Magnificent Heroic Opening Scene"!
Read more
6 people found this helpful
Report abuse

FallenGrace
4.0 out of 5 stars Superb, addictive heroic fantasy series.
Reviewed in the United Kingdom on 21 August 2018
Verified Purchase
David Gemmell has been my favorite author since I was a teenager. His work is a little male power fantasy yet I can't help but get absorbed into it with fantastic characters and action spread throughout and the Rigante series is no different. Though it's been many years since I read it so I have forgotten almost all of it, it's good to see that Sword in the Storm is still as addictive as I remember as I couldn't put it down once I started reading it.

The book focuses on a young man named Connavar, a member of the Rigante tribe. He is troubled by his father who he believes to have been a coward after dying running in battle which has plagued his upbringing. The book looks a lot not only on him but his mother, step father and the overlooming threat of the Stone Men, an army slowly destroying the different tribes one by one where they won't adapt or fight together. Connavar pledges to stop them and defend the Rigante.

I love the book, Connavar though the hero, is a troubled soul constantly struggling within himself, trying to be strong to defend his people but also hold back the anger he feels at events. His actions are not always good, he isn't some perfect heoro and even commits acts of pure evil yet he is written so well it's hard not to side with him even during those moments. I always liked how David Gemmell's heroes were often flawed though Connavar feels more than most. The story is pretty good following Conn as he gets older, his travels, adventures and how he learns about the Stone Men.

Targaid
4.0 out of 5 stars A good, solid start, if not desperately thrilling.
Reviewed in the United Kingdom on 12 November 2020
Verified Purchase
I really enjoy Gemmel's work and this has been no exception. It's not been the most compelling of his works but the world is fun, although it's very clear what the sources are.
It's setting up a monumental battle between it's protagonist and the Stone army (Roman Empire stand-ins) and has really nicely included the hero fighting for them and learning from their leader. Hopefully this will all be paid off throughout the series.
Some points seem a tad more pedestrian than his earlier works and the hero is not terribly captivating but it all comes together nicely.
Read more
One person found this helpful
Report abuse

Amazon Customer
4.0 out of 5 stars Excellent, but.......
Reviewed in the United Kingdom on 5 April 2019
Verified Purchase
Another great page turner from David Eddings, but what is it about him and endings? He brilliantly sets up a fantastic story with characters you care about and then runs out of puff 90% of the way through the book, rushing to a sort of conclusion but spoiling what could have been much better if he filled another 100 pages. Hey ho, I will still continue to read him as he was one of the best, as long as the prices are reasonable. £6.99 is too much for a back catalogue. Recommended.
Read more
One person found this helpful
Report abuse

AGw
5.0 out of 5 stars A different start but still great
Reviewed in the United Kingdom on 13 August 2015
Verified Purchase
I have read a lot of Gemmell. Only one have I felt slightly disappointed, with the first of the Damned books. Sword in the Storm the first of the Rigante books, why did I wait so long to read this one! I find Gemmell is a goood choice when stuck for something to read. Nothing taking your fancy, just finished an epic size series or need a break from one. Great after just finishing a bad book.

The characters are developed increadibly well as always. Connavar the lead character is a tormented soul and you hope he just ends happy. Does that happen? Not quite. He is a damaged character, he makes bad choices, he is not a great person but you like him. He is so single minded that he makes mistakes with everything else around him.
My next favourite character was his brother "can't remember his name now." The impact of everything that occurs to Connavar on him is done wonderfully as he turns into a jealous and bitter man.

This book is slightly different to Gemmells others as the character is developed from a young age growing up, were usually they are already adults. This was done masterfully and I would advise everyone to read this book if they are a fantasy fan.

My favourite Gemmell book you should read is Knights of Dark Renown, a stand alone but brillant.
Read more
7 people found this helpful
Report abuse
See all reviews
Back to top
Get to Know Us
Make Money with Us
Let Us Help You
And don't forget:
© 1996-2022, Amazon.com, Inc. or its affiliates