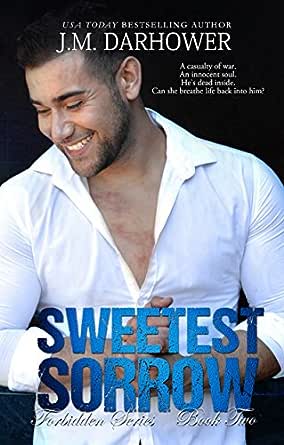 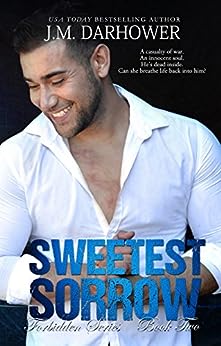 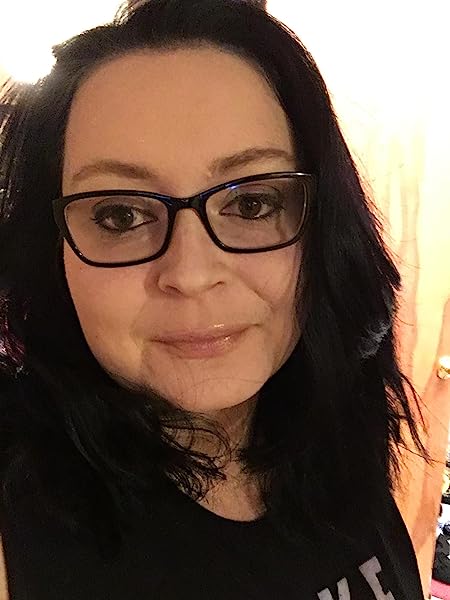 4.6 out of 5 stars
4.6 out of 5
46 global ratings
How are ratings calculated?
To calculate the overall star rating and percentage breakdown by star, we don’t use a simple average. Instead, our system considers things like how recent a review is and if the reviewer bought the item on Amazon. It also analyses reviews to verify trustworthiness.

Sharon Thérèse
TOP 1000 REVIEWER
5.0 out of 5 stars Five of the Sweetest Stars for a nail-biting and emotional read.
Reviewed in Australia on 4 September 2016
Reviewed by Rachel & Sharon Thérèse

Was it worth the wait? No doubt about it! True to her style, Ms Darhower has once again captured the essence of the Mob’s way of thinking and their modus operandi. Savouring every word in this long read was a doddle, a pleasure and mustn’t be rushed. The culmination of this epic series sucked us in from the first page and as always, left us in awe of her penmanship. Not forgetting, this woman’s an expert in weaving whatever tale takes her fancy. What she’s actually done here is tell two stories in one. Ooh boy, did she surprise the hell out of for us! Let’s be honest . . . even though we’d read By Any Other Name, the mere fact that we hadn’t read the synopsis of Sweet Sorrow meant we had little idea what to expect. Why, you may ask! Well, the release of the second book in this series was literally sprung on us and we hardly had any time to react.

Two heads of Mob families have been on a collision course for an eternity. A blood feud so strong and so ingrained turns into outright war and ooh boy, did we feel their seething hate simmer off the pages. Well before time, a vengeful inheritance for those close to them dictates a no questions asked policy. Established rules are unbreakable; victims become perpetrators and counterattack each other. The price has to be paid regardless of whom happens to be in the way. And this folks, is exactly what this story is about.

Galanti or Barsanti! Which team did we choose to be on then? Neither! Both capos are much to be desired. You’ll see why Primo Galanti made our skin crawl and why his archenemy, Roberto Barsanti had the same effect on us. However, not all their children felt the same about carrying on a personal vendetta which could cause a feared backlash for injustices committed.

"So do I grieve her? Absolutely. I grieve the loss of her every day. But not for the reason you're thinking."

Genevieve Galanti or Genna with a G and Matteo Barsanti, Matty-B, both endearingly named by someone close, have a secret. Left hanging on a huge cliffy in book one, we couldn’t wait to see how something as prohibited as theirs would play out. Genna’s been mollycoddled most of her life. Reasons there are, but she’ll go to great lengths to outwit those who have protected her. Young, sassy, headstrong and a tad irresponsible, it was a joy to see her put her big girl panties on and make the best of a bad situation. We have to confess that we didn’t connect to her straightaway but the change in her swayed our opinion no-end.

"You might prefer to live in the moment, but I like having a plan. The easiest way to keep out of trouble is to always stay a few steps ahead."

Ooh. . . Matty! Delectably chivalrous and hard-working, could we possibly have asked more of this man who manned up to the occasion without a blink of an eye! He’s been able to shun wishes from higher powers for many reasons. Why he chose to ignore goings on was not only self-preservation, but also to keep someone he loathed at arm’s length. But now he’s experiencing the fallout. Despite new revelations and a grey cloud hanging over him, he shone brighter than bright since his optimism for a better future never swayed.

"What kind of job? You're gonna need to elaborate, Matty."
"The kind that earns money."

Dante and Genna Galanti. Siblings whose very special relationship is perfectly conveyed throughout both reads, tested our emotions fervidly. By now, we’re in a total and utter mess and all we wanted was for them to find out the truth. Only the reader and assumingly, two other people discover who is behind a guarded secret and it’s quite frankly SHOCKING! Freakin’ awesome, actually! Forgivable? You’ll have to make your own minds up.

Loyal to his father, dangerous and true to his word, Dante is like a cat with nine lives counting down. Trapped in a series of uncontrollable events had us sitting on the edge of our seats. Someone made sure he was around to suffer the consequences of his mistakes though. So much so that we cried, no lies. . . we sobbed out hearts out for him. To say we crossed our fingers and backed him up wouldn’t be an exaggeration, either. Unbelievable as it may seem, this formidably pig-headed guy has a guardian angel and a friend he could lean on. Against all odds, his story unravels and pity him, we did!

"You know how it feels to have hope. It feels like maybe you won't die in the dark alone."

We never questioned Gabriella Russo’s stance. Even though she was in the right place at the wrong time and aware of what she was letting herself in for, her rule-bending seemed totally appropriate to us. Fearless and astute, she puts two and two together. She knows what she’s doing, she guards her thoughts to herself. She also becomes a decisive cog in the wheel in ‘this thing’ she had always swept aside. Where her trust lies and who she never doubted cannot be disputed.

"I trust you to give me CPR if I stop breathing."

Gavin Amaro’s part in this story is of such importance that we can’t help but mention him. He was a breath of fresh air and his light-hearted sense of humour so welcoming. Loyalty can be a double-edged sword. Nonetheless, how he went about calming troubled waters gained our respect at the drop of hat. Are we asking too much of the author for more of him? Ms Darhower, he truly deserves to be heard!

"You don't know what you're talking about. Vito Corleone had a cat."

For the very first time ever, neither of us agreed about the author’s narrative structure. Told in third person; I, Sharon, thought it could have been a tad shorter. Me, Rachel, said to her that Ms Darhower had put her heart and soul into every minute detail. Sharon recapped taking into consideration the flowing banter and had to agree. Conclusion. Fan-effing-tastic! Thank you for keeping us in the loop with your marvellous characters and their struggles for a better life. BRAVO!

Donna S
TOP 1000 REVIEWER
4.0 out of 5 stars Love this author
Reviewed in Australia on 9 July 2017
This second book in the "Forbidden series" was not quite as good as the first, but nevertheless it was fast paced with lots of things happening... maybe too many. As much as i loved Mateo and Genna in book one, I did not think they need as much time in this one, it made it just too long and was not necessary. I loved Gabriella in this one, she was entertaining, as was Genna.
Read more
Helpful
Report abuse

Amy Burch
5.0 out of 5 stars So Darn Good!
Reviewed in Australia on 24 April 2017
This one surpassed all my expectations!

Kindle Customer
5.0 out of 5 stars Finale
Reviewed in the United Kingdom on 17 April 2017
Verified Purchase
Another rollercoaster from J M Darhower, this final installment saw Dante get this ass handed to him by Gabriella, a Brazzi. Matty and Genna are still ensconced in the desert in Nevada and Genna finds out who the house really belongs too. Brasanti and Galante meet their match and HEA ensues, but not without a few twists, turns and tumbles along the way.
Read more
Report abuse

molly
5.0 out of 5 stars Gavin needs his own book ASAP!
Reviewed in the United Kingdom on 25 September 2016
Verified Purchase
I loved the first book so i just had to buy this and start reading it straight away. I must say, I really enjoyed it, even more than the first. I loved the different POV's, they were interesting to read and see what other characters were up to.
Gavin needs his own book, he just has to! He quickly become a liked character for me with his humour. Also being a fan of Sempre, I just LOVED the little crossover it had with it.
Read more
Report abuse

Rossie
5.0 out of 5 stars If you like mafia, romantic suspense 5*****
Reviewed in the United Kingdom on 24 October 2016
Verified Purchase
Absolutely brilliant read, the Galante, Barsanti and a bit of Amaro New York mafia families. Where the children suffer for the sins of their fathers, some die, some live and out if it comes a beautifully written romantic suspense story. Highly recommend this one.
Read more
Report abuse

Amazon Customer
4.0 out of 5 stars I loved Dante & Gabriella
Reviewed in the United Kingdom on 23 January 2017
Verified Purchase
I loved the first book of this series and i was dying to see more of Matty-B but i think, surprisingly in this book Dante's flirting were fantastic 😍 and Matty stayed walking on water as always. Loved seeing Corrado facing Primo! It was one of the best moments and made me want to go read 'Made' again. Overall, it did not dissapoint!
Read more
Report abuse

Mayer
5.0 out of 5 stars A Fantastic Book
Reviewed in the United Kingdom on 11 November 2016
Verified Purchase
Oh WOW, I loved this book. What a great conclusion to the series. Great characters and such brilliant story. Didn't want it to end.
Read more
Report abuse
See all reviews
Get FREE delivery with Amazon Prime
Prime members enjoy FREE Delivery and exclusive access to movies, TV shows, music, Kindle e-books, Twitch Prime, and more.
> Get Started
Back to top
Get to Know Us
Make Money with Us
Let Us Help You
And don't forget:
© 1996-2021, Amazon.com, Inc. or its affiliates