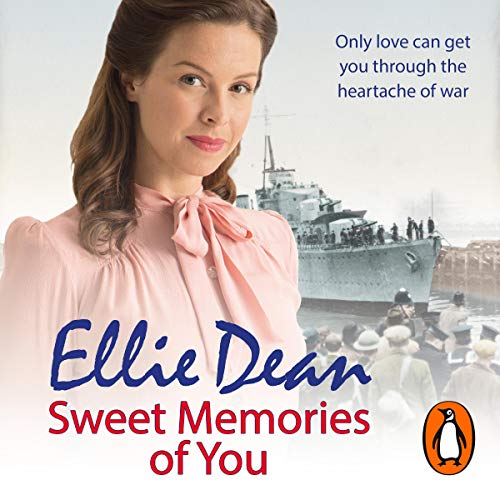 Sweet Memories of You

4.8 out of 5 stars
4.8 out of 5
490 global ratings
How are ratings calculated?
To calculate the overall star rating and percentage breakdown by star, we don’t use a simple average. Instead, our system considers things like how recent a review is and if the reviewer bought the item on Amazon. It also analyses reviews to verify trustworthiness.

Julie Ann Wright
1.0 out of 5 stars Amazing
Reviewed in Australia on 18 April 2016
Verified Purchase
I loved this books and again I had tears in my eyes in some parts, and just wanted to cry and cry, I want to be in Peggy's house, be there with her family, I cannot wait for Ellie's next instalment. Thank you Ellie for great reading
Read more
Helpful
Report abuse

Shirley
5.0 out of 5 stars Ellie Gets Better!
Reviewed in the United Kingdom on 26 April 2020
Verified Purchase
How on earth Ellie Dean has managed to keep us enthralled through the first 10 books of Cliffehaven I do not know! Each book goes from strength to strength and there is never a part in any of her books where she is padding out the story. Doreen has been mentioned in previous books but only the fact she worked for MOD and so bringing her war story into this book was brilliant and very enthralling (and I loved the ending paragraph !)
I never tell what a book is about in my reviews as often it can spoil it for the next reader, all I will say is this book is as brilliant as its predecessors .
Book 11 beckons!
Read more
Report abuse

KC book lover
5.0 out of 5 stars Another fantastic instalment in this long-running series
Reviewed in the United Kingdom on 6 April 2016
Verified Purchase
Reading one of Ellie Dean's books is like meeting up with an old friend, in fact, several friends, as so many of the characters are so well known now to regular readers of this series. The old favourites of Peggy, Ron and Cordelia return, as well as the young girls that are staying with her, Fran, Sarah and Rita. We also get to see more of Ivy who first appeared in the last book. And how could we forget Peggy's snooty sister, Doris, who is still causing trouble whenever she can. And in this book we finally get to meet Peggy's younger sister, Doreen. And this is where the book comes into its own. Whilst each book (in my opinion) is pretty much amazing, this one somehow tops all of the others. A riveting, at time sad, at times happy, tale of what life was like in WW2 when you would never know when you got up in the morning if you would still be alive at the end of the day (or if you would even have a home to return to), as things were so uncertain. And once again it made me thankful for the things we take for granted, a roof over our heads, food on the table, having whatever we want when we want it. I have already pre-ordered the next book in the series. Read it, you won't be disappointed!
Read more
One person found this helpful
Report abuse

Jordan Dreamcoat
5.0 out of 5 stars More Great Memories!
Reviewed in the United Kingdom on 28 January 2016
Verified Purchase
This is by far my favourite series of books ever and I eagerly awaited the release of the 10th volume in the enthralling wartime saga of the Reilly family and the many people who weave in and out of their lives. I ordered this book weeks before release, downloaded it at midnight on release day and finished it 4 hours later. It's just that good and fans of the series will not be disappointed!!
Read more
9 people found this helpful
Report abuse

Gwendoline Brammall
5.0 out of 5 stars Sweet Memories of you .
Reviewed in the United Kingdom on 20 March 2016
Verified Purchase
Well Another great story of Ellie Dean and The Beach View
boarding House .Occupants. Peggy. Ron. Cordelia. And Ron's
Dog Harvey. It's like home from home reading about them.
They are so down to earth people Not like Peggy's Sister
Doris. The snooty person. That she is. If she were to come
Off her high horse for a while she would see what life was about.
She Doris seems to only think that she has to keep up with the
elite forces of people she mixes with. And really they look down
On her. Because she isn't really like them at all. She is putting on
A show. And it doesn't always come true. As it has come to
For Doris. She peddles in things she shouldn't and makes life
Worse she ends up falling out with family cause she just.
Won't let go of her snobbery. And people get Fed up with it.
Cause really she isn't .anything in the high up ladder.
Only thinks she is. I just love Peggy and her family they are
So loving. And down to earth people and don't put o. Any
Airs or graces. They lead a normal life. And it's such a good
One they have. I would love to be a resident in that
household. At that time. Even if there was a war on. They
All get on well together .And I look forward to having a
New book
Read more
Report abuse

Carole J Lettice
5.0 out of 5 stars Another excellent book
Reviewed in the United Kingdom on 15 March 2020
Verified Purchase
I continue to be enthralled by the stories told of the different characters featured in this series who are all connected in some way to Beach View Boarding House. Although this book holds rather sad events there is so much more to learn. The storyline is also fuelling my interest in what life was like during the war years. I’m looking forward to the next book. Well done Ellie.
Read more
Report abuse
See all reviews
Back to top
Get to Know Us
Make Money with Us
Let Us Help You
And don't forget:
© 1996-2021, Amazon.com, Inc. or its affiliates