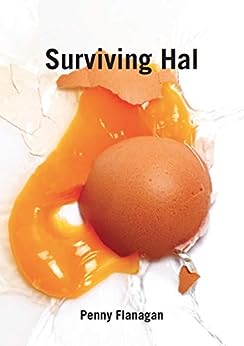 by Penny Flanagan (Author) Format: Kindle Edition
See all formats and editions
Sorry, there was a problem loading this page. Try again.
Mothers-in-law are famous for being difficult but when Nell marries Andy it’s her father-in-law, Hal, who is the problem. A corrosive force in his own family, Hal is a truly ugly Australian who spreads his corruption whenever he gets the chance. Surviving Hal takes place in Sydney and Thailand and is the story of Nell and Andy trying to keep their family together against the influence of a charismatic but ugly soul.

"Not since Helen Garner’s Monkey Grip has a book given me this feeling of fitting into another woman’s skin." - Marie Low
Read more
Previous page
Next page

3.0 out of 5 stars
3 out of 5
4 global ratings
How are ratings calculated?
To calculate the overall star rating and percentage breakdown by star, we don’t use a simple average. Instead, our system considers things like how recent a review is and if the reviewer bought the item on Amazon. It also analyses reviews to verify trustworthiness.

Snapdragon
TOP 50 REVIEWER
5.0 out of 5 stars Deftly described undercurrents in a family with a very toxic member
Reviewed in Australia on 24 March 2019
Verified Purchase
Maybe not everyone will be keen on this novel as the psychology of what’s happening is the main event, but I found it absolutely riveting. It’s narrated by Nell, architect, wife of Andy and mother of three young children. Andy has a brother, Tom, younger by eight years. Hal is the father of Andy and Tom and he is the toxic one. Once handsome, once an actor, once a real estate salesman, divorced twice, Hal is now living with third wife Phan in Thailand. He’s crude, he lies, he has a vicious temper, he’s narcissistic and he’s expert at creating discord and friction with fake innocent black balling. Yet his sons and others regard him as a loveable larrikin with a gift for being around kids. Well, partially. Nell is bemused by Andy’s continual soft walking around Hal’s more egregious comments when normally, Andy is quite assertive. Andy says it’s just easier in the long run, because Hal has ways of making people suffer if they stand up to him, something that Nell experiences for herself.

Tom also moves to Thailand and teaches English, as does his father. When he becomes engaged to Sunisa, friends and family fly over for the wedding. This is where the novel begins and ends (except for a coda) with the rest taken up with illuminating backstory. Thailand is described in very unsentimental terms, from the smog of Bangkok with its sewagy air to the uncharming backblock in the country where the wedding takes place. If you’ve ever experienced a third world toilet in the floor you’ll get the picture. Hal and Phan are there of course, with Hal doing his best to make everyone’s lives unpleasant. He still carries a huge chip on his shoulder about first wife Maude, with whom Nell now has a good relationship. It’s a very strange event - please read it.

It’s not only Hal’s psyche that the novel concerns itself with. Nell, Andy and Tom have their own issues and Flanagan is very good at pinpointing the undercurrents as relationships are negotiated in obvious and covert ways through the voice of Nell, who is an honest and intrepid observer, occasionally addressing us, the readers, directly. It was all so fascinating I had to stay up all night to finish it. PS: Penny Flanagan is a musician as well as an author. Isn’t it amazing how often people who are creative in one area are creative in another? This is sure to be a best seller.

Michael
4.0 out of 5 stars Good read, unexpected end
Reviewed in Australia on 29 July 2019
Verified Purchase
Hal was obnoxious and his behaviour was almost too bazaar to believe. I liked the first person telling of the story by the daughter in law. Easy holiday read.
Read more
Helpful
Report abuse
See all reviews

opalady
2.0 out of 5 stars Frustrating Read
Reviewed in the United States on 28 April 2019
Verified Purchase
Kept waiting for something to happen and apart from the last few pages it was a waste of time getting to the end!
Read more
Report abuse
See all reviews
Back to top
Get to Know Us
Make Money with Us
Let Us Help You
And don't forget:
© 1996-2021, Amazon.com, Inc. or its affiliates