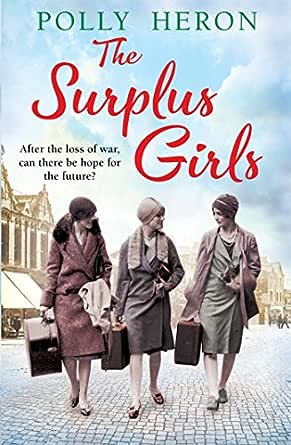 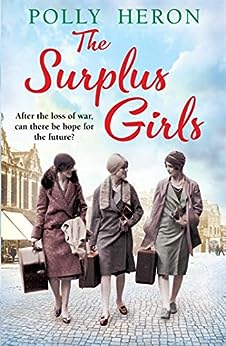 The Surplus Girls: An enthralling saga of love and bravery, perfect for fans of Lyn Andrews and Lily Baxter Kindle Edition

A promising start to a new saga set in the years between the wars... An enjoyable read full of good friends and bad characters. ― People's Friend

Pleasant and engaging ― NB Magazine --This text refers to the paperback edition.

Polly Heron has worked as a librarian specialising in work with schools and children, an infant teacher, a carer and a cook. She lives in Llandudno in North Wales with her husband and two rescue cats, but her writing is inspired by her Mancunian roots. She enjoys reading, gardening, needlework and cooking and she loves living by the sea. --This text refers to the paperback edition.

4.5 out of 5 stars
4.5 out of 5
146 global ratings
How are ratings calculated?
To calculate the overall star rating and percentage breakdown by star, we don’t use a simple average. Instead, our system considers things like how recent a review is and if the reviewer bought the item on Amazon. It also analyses reviews to verify trustworthiness.

NAME_NOT_RETURNED
5.0 out of 5 stars A brilliant debut by Polly Heron
Reviewed in Australia on 10 January 2020
Verified Purchase
What a triumphant first novel by a very talented author. The characters were so engaging and identifiable, it felt as though they might have been relatives or neighbours. It was great to learn about the struggles and attitudes faced by surplus girls after the war. I can’t wait to read more byPolly Heron.
Read more
Helpful
Comment Report abuse

Angela
5.0 out of 5 stars Strangely Compelling
Reviewed in Australia on 29 September 2020
Verified Purchase
The narrative is well thought out ... yet it's rather quaint in it's accurate portrayal of how the ladies of that era thought and spoke.
A most unusual book. Having said that, I enjoyed it immensely.
Read more
Helpful
Comment Report abuse
See all reviews

Read and Reviewed
4.0 out of 5 stars Eventful saga about the female lives that were irrevocably changed by WWI. Informative & involving.
Reviewed in the United Kingdom on 10 January 2020
Verified Purchase
This is the first in a trio of sagas set in the aftermath of WWI when the devastating loss of young men on the frontline irrevocably changed the lives of the women and families awaiting their return. Manchester, 1922 and twenty-year-old working-class lass, Belinda Layton, is one such young women whose expectations for the future were torn apart after her fiancé, Ben, perished in the Great War four years earlier. Facing a future without a husband to support her, Belinda is one of many surplus girls, with no husband or training and lifetime of responsibilities. Living with her fiancés mother and grandmother, Auntie Enid and Grandma Beattie, and working in a mill, Belinda is contributing to both their household and supporting her own family who are dirt poor thanks to her feckless father who drinks what little he earns. An encounter with a former teacher who had high hopes of Belinda becoming an office girl highlights her less than enviable predicament and the financial trap of effectively never having money to call her own.

Despite her heart remaining in the past, still clad head to toe in mourning four years after her fiancés death, Belinda knows she has a duty to herself and Ben to make the best of her future and try and better herself. But it seems those around her disagree, with both her own family and Ben’s carping about getting ideas above her station and everyone having their rightful place, which in the case of Belinda it seems is in the mill and in the eyes of Ben’s family, in black. Hemmed in by other peoples’ expectations, at the age of twenty Belinda is too old to be considered for an office junior position albeit one at a lower wage than she currently earns at the mill.

Belinda’s dilemma coincides with the decision by the middle-aged spinster Hesketh sisters - brusque and forthright, Miss Prudence and sensitive and kind-hearted, Miss Patience - whose own personal circumstances see them open a business school, teaching secretarial evening classes and equipping a generation of young women with the skills to support themselves. As a temporary office post in a local bookshop aimed at providing Belinda with experience leads to affairs of the heart and the business school meets opposition after some nasty rumours start to circulate, the story has plenty to occupy reader attention. And that’s aside from Belinda’s domestic problems, the difficulty of breaking the news that it is time to move on to Ben’s family and struggling to keep a roof over her own parents heads.

Belinda is a hugely sympathetic character and an empathetic protagonist with her compassion, integrity and determination admirable. Pulled in all sorts of directions by those around her she has been thrust into a life of maturity and taking responsibility for the plight of her family. Although she doesn’t think she is a strong woman or doing anything out of the ordinary, a fact which also contributes to her appeal, Belinda’s story, as that of the Misses Heskeths is moving and inspirational. Significantly the entire supporting cast, not just Belinda’s immediate family, are well-defined and one aspect of the story that impresses is Polly Heron’s attention to following all of their individual stories to some degree.

Although the story contained far more romance than I had expected from the premise it was undoubtedly balanced out by several more important themes, with the novel’s authentic portrayal of class and social standing in the era and the difficulty of bettering oneself made apparent. Along with providing a clear-eyed look at the welfare options awaiting the very poorest with the Board of Guardians and the threat of life in the workhouse there is some pertinent social history of the period within the novel. The story also highlights the tensions that arose when women in employment were forced to surrender their jobs for a returning soldier and those that objected were branded unpatriotic.

Uncertainty, romance, conflicted loyalties and a story that takes its protagonist on a journey for independence is as relevant to modern day society as it was a century earlier. Involving, tightly plotted and full of vivid characters to love and hate!

With thanks to Readers First who provided me with a free copy of this novel in exchange for my honest and unbiased opinion.
Read more
One person found this helpful
Report abuse

Kathy E
5.0 out of 5 stars The Surplus Girls by Polly Heron
Reviewed in the United Kingdom on 14 January 2020
Verified Purchase
I have enjoyed all of Susanna Bavins's book. Now writing under the name of Polly Heron, The Surplus girls is another five star read for me. It made me realise how many poor women were left surplus after the World War One with some many young women were left after losing their menfolk. You realise how hard it was for a woman to establish herself in a job after the war.
This book enlightens on the life of Belinda who lost her Finance Ben in the war and two Older spinster Ladies Prudence and Patient. This is such a beautiful well written book and Polly Heron (Susanna Bavin)has well research it). Hopefully there will be more books in the future from this talented author. This is a five star read from me and a recommended read.
Read more
Report abuse

Kindle Customer
2.0 out of 5 stars Not for me
Reviewed in the United Kingdom on 2 January 2020
Verified Purchase
NetGalley

Booklover Sandra
5.0 out of 5 stars From Black to Colour and life.
Reviewed in the United Kingdom on 3 January 2020
Verified Purchase
This is a sad story of the girls left behind after ww1 with no men to marry,i have enjoyed reading about Belinda and the struggle she had after losing her fiance Ben in the war she not only has to support his family but also her own and that is not easy as all her family do is argue and cause trouble.Belinda wants to come out of her widow clothes but has a fight with bens mother and grandmother but she wants to wear colour and to rejoin the living not to live in black.I can recommend this book 5*
Read more
Report abuse

wendy zaidi
5.0 out of 5 stars IT'S A WONDERFUL SERIES
Reviewed in the United Kingdom on 14 February 2020
Verified Purchase
A beautifully written story by Polly Heron aka Susanna Bavin, I'm so pleased this is going to be a series as it brings home the struggle these girls went through after the first world war,I find history so interesting, thanks to our saga authors. From the beginning of this story you are hooked with the ups and downs, I was sorry when it finnished, the characters are very strong people, which I suppose they had to be...
Read more
Report abuse
See all reviews
Get FREE delivery with Amazon Prime
Prime members enjoy FREE Delivery and exclusive access to movies, TV shows, music, Kindle e-books, Twitch Prime, and more.
> Get Started
Back to top
Get to Know Us
Make Money with Us
Let Us Help You
And don't forget:
© 1996-2020, Amazon.com, Inc. or its affiliates