$29.94
And FREE delivery on eligible orders. See details and conditions
Sold by: Amazon AU
Flip to back Flip to front
Listen Playing... Paused   You're listening to a sample of the Audible audio edition.
Learn more
See all 2 images 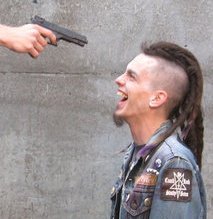 4.1 out of 5 stars
4.1 out of 5
13 global ratings
How are ratings calculated?
To calculate the overall star rating and percentage breakdown by star, we don’t use a simple average. Instead, our system considers things like how recent a review is and if the reviewer bought the item on Amazon. It also analyses reviews to verify trustworthiness.

Edmund R. Colell
5.0 out of 5 stars B-Movie Badassery
Reviewed in the United States on 19 December 2010
Verified Purchase
Disregarding nay-sayers, the cheese of B-movies and pulp fiction has had a strong effect on the world of fiction. Not only did they inspire Quentin Tarantino's movies, but they also had a major hand in nourishing the development of bizarro fiction and many other examples of cult entertainment. Jeff Burk's Super Giant Monster Time! took a lot of these plot elements to make possible, and it gives the reader the benefit of not only being slammed upside the head with the cheese hammer, but giving them three possible hammers to choose from - Si, a punk rock girl waking up to an apocalypse; John Smithe, an office worker filing reports during the apocalypse; and Gary Freedman (Half-Life reference?) whose company may have had a hand in the apocalypse.

In effect, Super Giant Monster Time! is a choose-your-own-adventure book for the current age that relies on camp from yesteryear. If old sci-fi, horror, and superhero fiction makes for tickling experiences, it helps that this book gives readers the way in which they will be tickled. Stabbing people with mohawk spikes, going on a tag-team superhero adventure with your cat to fight aliens and monsters, and undoing the fabric of one's own existence are only a few possible actions among many that breed feelings of "Oh hellz yeah." Even some of the failure outcomes can be entertaining, and while the spacemen get to be annoying after a while, it is interesting to roll a die and find out just what flavor of punk you are transformed into by their ray guns, and if you even survive after that. "But Ed," you may say, "please stop spoiling this book." It would be spoiling if it weren't for the 50+ possible endings, so everything said here only includes roughly the first few readthroughs, if that. So I'll halfway-spoil one more ending: one of them does not quite seem like an ending at first, only coming to light when the realization of a tedious loop forces you out of the page turning.

As for any complaints... wait a minute... waaait for it... um, too many "death" endings, I guess? They can be a bit frustrating and they often seem to shoehorn the reader in only a few directions when constantly having to return to earlier parts to pick solutions that further the plot. Also, the illustrations can be a bit hit-or-miss. While there are some very well-detailed ones, there are a few that seem out-of-proportion with other ones. For example, one character's chin (I won't say who) seems to change between one picture and another. And, while it's not a proportion thing, it was a bit weird to see John have a tie in one picture and no tie in the rest of the pictures when there's no mention of him taking his tie off.

Okay, so those complaints are token. Super Giant Monster Time! is simply too awesome to level any concerned criticism towards it. There may be some who would be turned off simply by the subject matter, but those people are no fun.
Read more
One person found this helpful
Report abuse

James L. Steele
5.0 out of 5 stars CYOA for adults!
Reviewed in the United States on 9 May 2010
Verified Purchase
A parody of the Choose Your Own Adventure series. It's CYOA, but for adults and with a bizarre twist. Lots of bizarre twists. I love how the cover is tinted yellow on the edges. Looks like an aged CYOA book you'd find on the shelf of a thrift store, which is exactly where I bought all of mine as a kid.

True to its inspiration, the book takes place from a second person perspective, and it offers "you" the choice of three characters to experience the story. You can be a punk girl caught on the streets during the alien and monster invasion. You can be a boring office worker trapped at work when the invasion begins. Or maybe you'd rather be a scientist at the secret lab where the monsters were created?

All three parallel stories have their good endings and bad endings, and each one is absurd and bizarre and a good load of fun. The carrot ending, for example, made me laugh out loud. If you're lucky, you might even become a flying supercat, or one of the monsters! Another great thing about this book is that you won't fully understand the story until you "play" as all three characters. This is what I've wanted for years: a CYOA story to satisfy my twisted, adult desires.
Read more
4 people found this helpful
Report abuse

A. Chavez
4.0 out of 5 stars Don't you love CYOA's?
Reviewed in the United States on 29 June 2011
Verified Purchase
Quite a fun book, I grew up trying to read every CYOA book that was out there. I first discovered them combing the elementary school library trying to find a good book to read for SSR (Sustained Silent Reading ) time. This series or CYOA is totally for adults. Giant monsters have taken over the city and you can play 1 of 3 characters and try to do something about it. You got Si, the punk rock chica with a mohawk and who is immune to the alien ray guns that turn normal people to punk rockers, John Smithe, the run of the mill office worker who is afraid of him boss, and Gary Freedman, the scientist at Complex 23 where most of these monsters attacking the city came from. It's a fun little book, I like some of the twisted endings and unusual options, I find myself still not wanting to choose an option that leads to a page towards the end of 5the book due to avid CYOA readers knowing that the end of the book pages usually, not always, have a dead end that usually isn't good.
Read more
Report abuse

I started a corporate revolt but was crushed by a giant squid.

I was a hot chick/punk rocker but was captured by Edward Lee's mafia snuff filmmakers.

I was a scientist who turned into a moth and became God.

This is an amazing CYOAB for adults, bizarre, funny and hardcore all at once, this book will take up hours of your time as you "play" with it.

Is it better than Ocean of Lard? ...some parts are, some parts aren't... but like it's predecessor it shows that one of the best things about bizarro is... it can be really, really fun.
Read more
Report abuse
See all reviews
Get FREE delivery with Amazon Prime
Prime members enjoy FREE Delivery and exclusive access to movies, TV shows, music, Kindle e-books, Twitch Prime, and more.
> Get Started
Back to top
Get to Know Us
Make Money with Us
Let Us Help You
And don't forget:
© 1996-2020, Amazon.com, Inc. or its affiliates