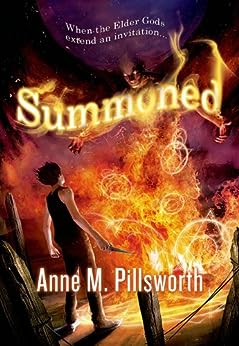 by Anne M. Pillsworth (Author) Format: Kindle Edition
See all formats and editions
Sorry, there was a problem loading this page. Try again.

While browsing in a rare book store in Arkham, Sean finds an occult book with an ad seeking an apprentice sorcerer, from a newspaper dated March 21, 1895. Even more intriguing, the ad specifically requests applicants reply by email.
Sean's always been interested in magic, particularly the Lovecraftian dark mythology. Against his best friend Edna's ("call-me-Eddy-or-else") advice, he decides to answer the ad, figuring it's a clever hoax, but hoping that it won't be. The advertiser, Reverend Redemption Orne, claims to be a master of the occult born more than 300 years ago. To prove his legitimacy, Orne gives Sean instructions to summon a harmless but useful familiar—but Sean's ceremony takes a dark turn, and he instead accidentally beckons a bloodthirsty servant to the Cthulhu Mythos god Nyarlathotep. The ritual is preemptively broken, and now Sean must find and bind the servitor, before it grows too strong to contain. But strange things are already happening in the town of Arkham....

Welcome to the darker side of New England in the first of a new series from Anne Pillsworth.

"Summoned is a fantastic debut...this YA gothic is infused with sly wit and occult tremors in equal measure. Finally, a novel for readers who like their magic dangerous, and their hexes irrevocable." —Sean Beaudoin, author of The Infects and Wise Young Fool

When the Elder Gods extend an invitation, be wary of the strings attached. --This text refers to the paperback edition.

When the Elder Gods extend an invitation, be wary of the strings attached. --This text refers to the paperback edition.

C.T.
5.0 out of 5 stars Harry Potter meets the Cthulhu Mythos
Reviewed in the United States on 7 September 2016
Verified Purchase
With the advent of the 21st century and the entering of Lovecraft into the public domain, there are more risks being taken with his stories. Works like The Ballad of Black Tom and The Litany of Earth challenge assumptions about the racism inherent in some of his stories while things like the Cthulhutech RPG merge Lovecraft with sci-fi anime. Summoned is enjoyable and surprising as it's the first time I've ever read a Young Adult Cthulhu Mythos novel.

I'm a fan of the Young Adult fantasy/sci-fi genre as it's been popularized but I questioned whether or not the mixture would work. After all, H.P. Lovecraft is about cosmic horror and implications of unspeakable dread. Then I remembered what my teenage years were like and how it was nothing but a daily reminder of just how unspeakably awful the universe was turning out to be. If Katniss Everdeen could be part of a ritual murder of children every year, so could H.P. Lovecraf's Mythos be the basis for Summoned.

The novel's premise is Sean Wyndham and his friend Eddy (Edna) visit Arkham, Massachusetts before stumbling upon an occult tome written by a Puritan sorcerer. The book contains a newspaper clipping from the 19th century which includes an e-mail address for Sean to contact him. Sean, a devoted fan of the supernatural as described in H.P. Lovecraft's works, contacts the Reverend only to be given a test which he screws up badly. Instead of summoning a harmless minor spirit, he ends up bring an eldritch abomination into the world which will inevitably go after him and his loved ones.

Anne M. Pillsworth almost lost me when the Servitor began eating the neighborhood pets. I'm a die-hard Lovecraftian but that's a bridge too far. Have the monster eat humans, not cute little dogs! However, I managed to trudge through this sanity-blasting image to enjoy the rest of the story which is kind of a reverse Harry Potter. Just as Harry Potter indulges in magic to enjoy a wonderful life, so does Sean discover magic is the horrific road away from everything good in his life. Even so, Sean can't turn it down as like all good Cthulhu Mythos investigators, it's impossible to go back up the rabbit hole.

The world of H.P. Lovecraft is somewhat toned down for this novel but not so much that it's not recognizably Cthulhu. The main differences is that Sean has the aid of seasoned scholar-heroes from Miskatonic University at his back versus those poor fools blubbering blindly along in Lovecraft's time. Also, the Mythos is more likely to cause Raldolph Carter-esque fascination versus the loss of sanity as well as will to live as it does in other stories. Sean's greatest danger isn't that Nyarlathotep will destroy him, it's that he was become a servant to him.

Given how many children Sean's age (such as myself at said age) are enamored by the workings of Yog-Sothery when they discover it, I find this an entirely believable phenomenon. It is older gentlemen, like Lovecraft's protagonists, who are frightened rather than fascinated by the Things Beyond. I'm actually surprised the Call of Cthulhu roleplaying game by Chaosium was not mentioned in this novel but perhaps that's for the best given their somewhat twitchy feelings regarding copyright.

One thing I appreciated about the book is while the children are the protagonists, the adults aren't useless. While possessing a healthy amount of skepticism to the horrors they face, they prove instrumental in dealing with the problem. I was especially fond of Helen the new archivist at Miskatonic University who reminded me of a number of grad students I worked with at Marshall University. She's a very likable character and I actually thought she and Sean's father had a real connection.

The characters in Summoned are likable, the plot entertaining, and events progress in an entertaining fashion from beginning to end. There's a few flaws like the fact they cling to the idea the supernatural is a hoax perhaps just a wee bit too long but these are minor in the grand scheme of things. If you want an excellent bit of light horror reading, then this is the book for you.

9/10
Read more
3 people found this helpful
Report abuse
See all reviews
Back to top
Get to Know Us
Make Money with Us
Let Us Help You
And don't forget:
© 1996-2021, Amazon.com, Inc. or its affiliates