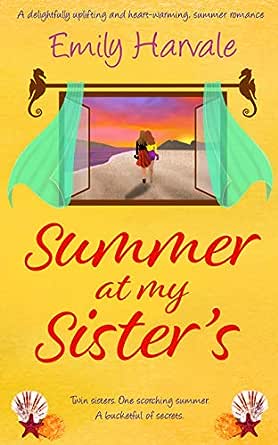 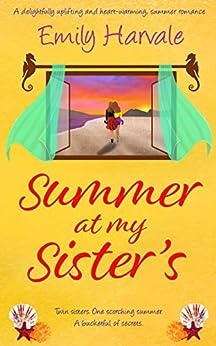 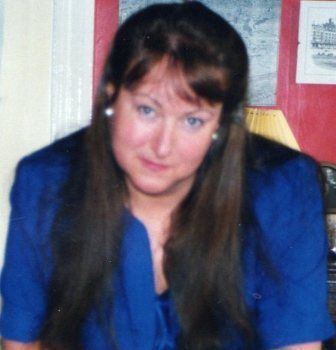 Summer at my Sister's: A delightfully uplifting and heart-warming, summer romance Kindle Edition

4.4 out of 5 stars
4.4 out of 5
162 global ratings
How are ratings calculated?
To calculate the overall star rating and percentage breakdown by star, we don’t use a simple average. Instead, our system considers things like how recent a review is and if the reviewer bought the item on Amazon. It also analyses reviews to verify trustworthiness.

CoffeeKit
5.0 out of 5 stars Well-drawn characters and a plot with a twist
Reviewed in the United Kingdom on 1 August 2020
Verified Purchase
I loved the fact that the perfect sister’s live wasn’t that perfect at all. This book is a good look at how we perceive people’s lives and how making a wrong choice can have repercussions. The characters are well drawn and kept me interested way in to the night. Josie the heroine is flawed, but loveable and at one point gives an impressive speech about women’s sexual freedom. The ending is of course happy. The twist in the plot is surprising. Don’t want to give it away, but the only thing that annoyed me was someone taking and printing out a photo 16 years ago when there were no cameras on phones and digital cameras were evolving but lots of people still used film, especially teenagers. However technically could have accessed a digital camera and printed. Overall this book is a real return to form and I look forward to the next book in the series.
Read more
2 people found this helpful
Report abuse

dolphin1974
5.0 out of 5 stars Great summer romance with a twist
Reviewed in the United Kingdom on 4 August 2020
Verified Purchase
Emily has a knack of capturing her audience and transporting them in to the books she writes. This time we are transported to Seahorse Harbour a seaside town not too far from London with at least 3 heart throbs living in the small town.
There is mystery, intrigue, suspense, rekindling of relationships, love, lust and laughter, added to betrayal and misunderstandings and you won’t be able to put this book down.
I recommend this latest book from Emily, it is a stand-alone but there is at least one other planned book in the series, check out Emily’s website for details and a map of Seahorse harbour.
Read more
2 people found this helpful
Report abuse

mercyferry
2.0 out of 5 stars Spoilers so be careful
Reviewed in the United Kingdom on 5 October 2020
Verified Purchase
It didn’t really take off for me, I felt the lectures on sea life extinctions and waste left on beaches were distractions from the plot line. We all watch David Attenborough and Countryfile, it is not necessary in what was supposedly an escapist novel. Regarding the reason Josie has practically ignored her twin sister, her nephew and her niece for years was too obvious from the beginning. Diane’s confession of her involvement was a pretty horrible thing to do to her sister, but hey, that’s cool so what? I don’t think I could be that forgiving. The reason why Diane was more suitable and Josie wasn’t was a bit naff, after all they have the same father, so why would he only help one daughter? So much of the plot hinged on Diane’s mother in law, but she was never a character, again just an aside.
Josie as a character was inconsistent, at the beginning a fun loving commitmentphobe, two or three chapters in she didn’t do one night stands, and hadn’t had that many sexual encounters. And please, she turns up in a little seaside village and within a couple of hours is propositioned by three hot guys. In your dreams. Felt a bit cheated at the end, I thought from the read inside this would be a good romantic comedy to sink into during these strange times, but I was disappointed again. I won’t continue with the series and will avoid this author, life is too short and there are so many others out there.
Read more
Report abuse

Bev Beach
5.0 out of 5 stars Another Gem From Emily Harvale!!!
Reviewed in the United Kingdom on 27 October 2020
Verified Purchase
Loved this book... Love the characters... Everytime I read one of Emily's books, I could be right there. Total escapism and I fall in love with each character. Two sisters, so different but each with a story to tell. Diane seeming to have everything and Josie always feeling second best... I loved the twists and turns and laugh out loud moments... I can't wait for the rest of the series. The thing I love most about Emily's book is that you can revisit the characters in the next book and find out what happens next... Totally recommend this book... Thanks again Emily for something lovely in these strange times!!!
Read more
Report abuse

JS
5.0 out of 5 stars Fantastic book
Reviewed in the United Kingdom on 16 August 2020
Verified Purchase
Once again, as in all Emily Harvale books.. Fantastic book. You get transported to the wonderful, cozy places -characters become like family and you just wish you could go visit them and get a chance to live in these wonderful places. Highly recommend ALL her books.
Read more
One person found this helpful
Report abuse
See all reviews
Get FREE delivery with Amazon Prime
Prime members enjoy FREE Delivery and exclusive access to movies, TV shows, music, Kindle e-books, Twitch Prime, and more.
> Get Started
Back to top
Get to Know Us
Make Money with Us
Let Us Help You
And don't forget:
© 1996-2020, Amazon.com, Inc. or its affiliates