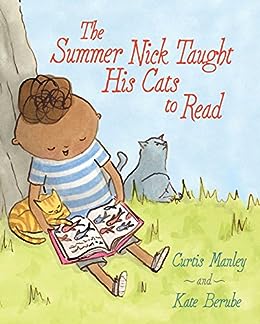 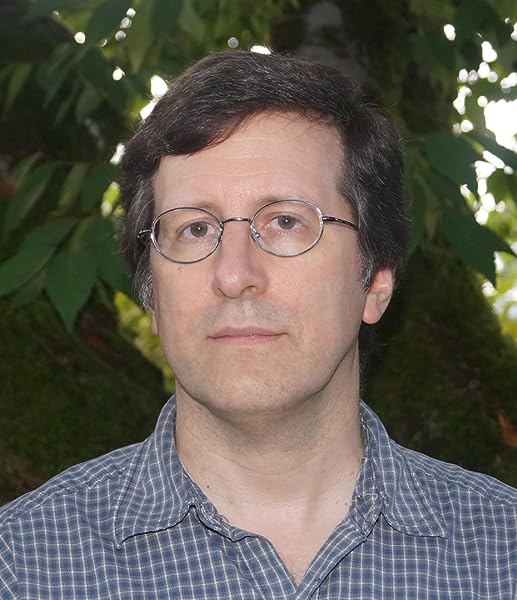 The Summer Nick Taught His Cats to Read Kindle Edition

Curtis Manley liked stories with cats when he was young, but never tried to teach his cat Inky to read. When his daughter came along years later, she also liked stories with cats—and stories with mice! Curtis grew up in Pennsylvania but now lives near Seattle, Washington, with his wife, daughter, and just one cat. The Summer Nick Taught His Cats to Read is his first picture book. Visit him at CurtisManley.com.

Kate Berube is an illustrator who grew up in Connecticut and now lives all the way on the other side of the country in Portland, Oregon. Formerly a bookseller at the well-known Powell’s in Portland, Kate now writes and draws in a room filled with zero cats, but lots of books, dog hair, and a one-eyed dog who still cannot read despite all of Kate’s best efforts. Find out more about her at KateBerube.com. --This text refers to the hardcover edition.

An enthusiastic reader teaches his two cats toappreciate books, though it takes extra effort to interest one of them in the endeavor. Nick is a round-headed, early-elementary-sized, brown-skinned childwith a fluff of curly hair and two cats, Verne and Stevenson. All three enjoy frolicking together, but when Nick wants to read, one cat ignores him, and the other sprawls on the volume open in his lap (a habit that will be familiar tocat lovers of all ages). The latter, Verne, a small cat with orange-and-brown stripes and a cheerful disposition, is amenable to Nick's instruction."But not Stevenson," who frowns, runs away, and even hisses. When Nick and Verne discover Stevenson's fascination with pirates, however, they have the hook they need. Nick's efforts are both logical and methodical, and once he has achieved his goal, he and his feline friends find ways toincorporate their favorite stories into all kinds of imaginative play. Manley's conversational text flows smoothly and has a matter-of-fact tone that grounds the fantastical elements. Berube's charmingly childlike art, created in ink, Flashe paint, and acrylic paint, captures the cats' personalities perfectly and creates a cozy, everyday world with just enough amusing details to reward repeat readings. Young listeners of all stripes (and species) will enjoy thiswarmhearted celebration of literacy and imagination. (Picture book. 3-6) -- Kirkus Reviews ― 5/1/16

Nick, a brown-skinned boy with a puff of curly hair, has two cats: Verne, who is pretty chill, and Stevenson, who makes Grumpy Cat look exuberant. Neither is happy when Nick turns his attention to a book: Verne lolls across the pages, and Stevenson sits on a stack of volumes, cleans his paws, and scowls. “So Nick decided to teach them to read,” Manley writes, making a marvelous debut—and it works. For Verne, anyway: “He practiced on his own, over and over, even after Nick went to bed.” Soon, Verne has a library card and is borrowing “so many books that Nick could hardly carry them home.” But where does that leave Stevenson? As any former reluctant reader knows, sometimes it takes the right nudge to fall in love with books; here, it’s the discovery that cranky Stevenson is actually an artist. Berube’s softly textured paintings are funny, smartly composed, and deeply moving as she makes the cats’ literary and artistic endeavors seem like the most natural thing in the world. Ages 4–8. -- Publishers Weekly, starred review ― April 18, 2016

Book-loving Nick teaches his cats, Verne and Stevenson, to read in this debut picture book. Nick loves spending time with his cats, but he notices that they seem bored every time he pulls out a book. He decides that teaching them to read will not be too difficult, and quickly makes flash cards with some easy words on them. Though Verne struggles at first, he begins to show interest, but Stevenson remains unenthusiastic. Verne quickly becomes a proficient reader, but Stevenson starts to withdraw more and more when Nick tries to make him read (“ ‘F-I-S-H.See? Fish! Verne loves that word. Don’t you?’ But Stevenson said, ‘Meow!’ and ran under the porch. He hissed at Nick and Verne.”).Once Nick discovers a treasure trove of pictures, drawn by Stevenson, he realizes that he simply wasn’t using the right approach with Stevenson. With a nod to Treasure Island, the author reveals that Stevenson is most interested in being a pirate. Soft acrylic drawings show the right amount of emotion on Nick’s face and on the felines’ as well. VERDICT This quirky tale filled with subtle humor makes a fun read-aloud, especially for cat lovers, literacy lovers, or anyone looking for a great story. -- School Library Journal *STARRED* ― June 1, 2016

Nick and his cats, Verne and Stevenson, are good buddies. The cats accompany Nick while he sleeps in his tent, splashes in his kiddie pool, and rides his bicycle. But when he tries to read his books, they can be . . . unhelpful. So Nick decides to teach them to read. Initially, neither responds to his flashcards and lessons, but Verne finally takes an interest and picks up the skill. Next, Nick tempts Stevenson by reading pirate books aloud. Once the reluctant cat learns to read, the trio’s imaginative play reaches new heights, while they all love sharing books together. Teaching cats to read seems challenging but attainable in Manley’s well-crafted story. Created with ink, acrylics, and Flashe paints, the expressive illustrations have their own unstudied charm. The artist captures the cats perfectly in the initial reading scene, with Verne happily sprawling on his back across the open book in Nick’s lap, while Stevenson sits solidly atop a nearby pile of books and licks his paw. A satisfying combination of original storytelling and amusing, affectionate artwork. — Carolyn Phelan -- Booklist online ― May 18, 2016

The adventures of Nick, Verne and Stevenson hint that differences in cat’s personalities—and maybe people’s—should be accepted and nourished. We can all get along fine if we focus on each other’s strengths. In The Summer Nick Taught His Cats to Read, first-time picture book author Curtis Manley delivers an engaging story that blends seamlessly with Kate Berube’s beguiling drawings. The book is sure to become a read-aloud favorite. -- BookPage ― July 5, 2016 --This text refers to the hardcover edition.

5.0 out of 5 stars
5 out of 5
38 global ratings
How are ratings calculated?
To calculate the overall star rating and percentage breakdown by star, we don’t use a simple average. Instead, our system considers things like how recent a review is and if the reviewer bought the item on Amazon. It also analyses reviews to verify trustworthiness.

Anna Crowley Redding
5.0 out of 5 stars Love. This. Book.
Reviewed in the United States on 11 July 2016
Verified Purchase
Our family LOVES this book. First, the charm of the illustrations will reel you in before you even open the cover. But once you do... prepare to board a story full of heart, humor, and poignance. The roadmap for bringing reluctant readers into the world of books is a bonus. I've already given a copy as a birthday gift and can't wait to order more. This book is a must-own, must-read, and must-shout-about-from-the-mountain-tops kind of story. Enjoy!
Read more
One person found this helpful
Report abuse

Amazon customer
5.0 out of 5 stars Teaching is learning
Reviewed in the United States on 22 May 2019
Verified Purchase
I love cats. I love reading. I loved the way these two were brought together. I really liked a kitty getting his own library card. So fun and educational.
Read more
Report abuse

Nancy W
5.0 out of 5 stars Great book to add to my classroom library!
Reviewed in the United States on 15 July 2020
Verified Purchase
Love this sweet story about a boy and his cats. Can’t wait to read it to my first grade class, and very happy that it has a main character who is black, along with his dad.
Read more
Report abuse

MissMocha
5.0 out of 5 stars Lots of fun!
Reviewed in the United States on 9 September 2016
Verified Purchase
My 4-year-old son adores this book! We reference Verne and Stevenson (the cats) all the time. Lots of fun!
Read more
Report abuse

mrozo
5.0 out of 5 stars Love this book
Reviewed in the United States on 20 September 2016
Verified Purchase
Love this book. Beautiful, fun illustrations. Inventive story. My daughter is in a kitty phase, so she loves seeing the cats on every page. Highly recommend this book.
Read more
Report abuse
See all reviews
Back to top
Get to Know Us
Make Money with Us
Let Us Help You
And don't forget:
© 1996-2021, Amazon.com, Inc. or its affiliates